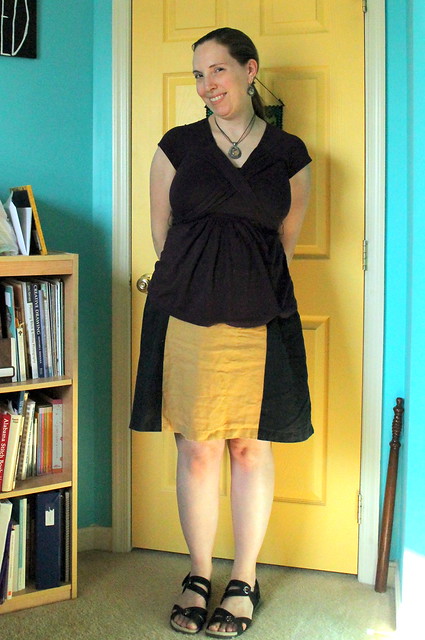 Just a quick project to share today. This was the only photo that sort of turned out, to be honest, and I’m limited on time while the baby’s napping. I tried a couple of side shots, but I’ll admit I’m feeling a little self-conscious about how I look in those– I know I should be kind to myself, since 8 weeks ago I was just going into labor, and lots of people around here have been telling me that I look great. But I think I’m ready to not look like I have a baby bump on here, you know?

Anyway, the skirt. I’m trying to focus on projects that are relatively quick to make and forgiving on the fit, while I restock my wardrobe with a few basics to help me get into the fall. This is the Sewaholic Rae skirt, which was designed as a beginner skirt, so I figured it would work up fast. Also, elastic waists are my friends right now. I was really happy with how this turned out. It was a fairly instant-gratification project– I think it only took me 3 or 4 afternoon naptimes to sew up, and those have been quite variable in length so far, so that’s not bad. The fabrics are leftover pieces from this skirt and these pants, and I think they pair well together. I’m calling it my Zelda Rae skirt, because I have to admit that black and tan makes me think of German shepherds, and in particular, the very sweet one that my parents had while I was in college and beyond. But I also figured the black and tan combo means that it would go with a lot. Aside from that, there’s not much to say about the construction. There’s only two pattern pieces. Which also makes it quick to cut out, and since that’s not my favorite part of sewing, that’s fine by me.

It’s a little wrinkly looking, yeah. But the tan is linen, while the black is a linen-type. So let’s call this “embracing the nature of the fabric” instead of “I’m too lazy to iron while trying to get us out the door”, ok?

All in all, I think this is a great skirt for both the seasonal transition, and my sizing transitions. I’m definitely going to attempt at least one more of these, assuming the refashion I have in mind has enough fabric. I’m also debating about two more. I used a gift card I’ve been hoarding to buy some chambray, since none of my old skirts that weren’t already elastic waist were fitting. But then last week, I made the happy discovery that I’ve shrunk down enough that my TARDIS skirt fits again, even though it’s snug, and this other denim skirt is also right on the verge of fitting (snugly).  So now I’m questioning whether that chambray would be more useful as another type of garment. I also splurged on another piece of fabric just before the baby was born, because the Whovian in me demanded it, and I was originally thinking a different Sewaholic skirt pattern, but I think I might go with this instead. After all, the sizing is more versatile. And we know we’d like to have at least one more kid a little ways down the road, assuming we can, so I’d rather use my precious sewing time to make things that aren’t just going to fit for a few months before doing this all over again.