Sometimes, I feel like I’m not a very creative person.
Sure, I look creative. After all, I have a music degree (two, actually), and I mange my own clothes. I also enjoy cooking, most of the time. But here’s the thing: I’m a classically trained musician. Which is basically the equivalent of not being the author who creates the story, but the translator who takes a different language and rewrites it into English. The times I’ve gotten the most nervous performing have been the times I’ve been told to just make up a part. And I see this in the other things, too. I can follow a recipe well, but I struggle to take a handful of ingredients and turn them into a tasty meal without one. And I choose the fabrics and tweak the fit, sometimes I mash together two patterns if I’m feeling brave, but it’s almost always someone else’s design that I’m just interpreting. 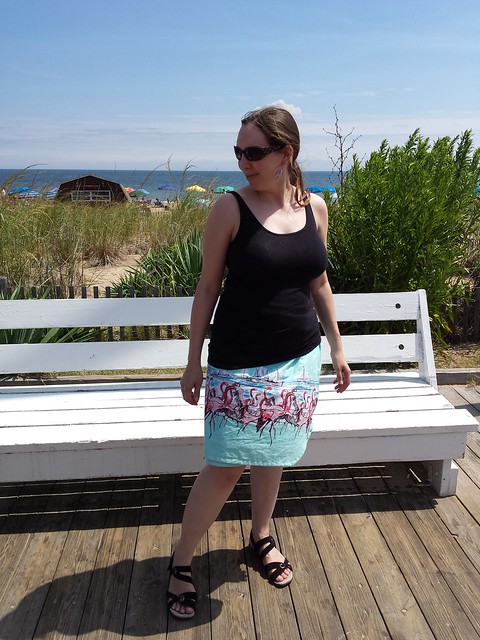 That being said, this skirt was definitely out of my comfort zone. And it’s certainly not perfect. If this was Project Runway and Michael Kors was still a judge, he’d probably pull out that Becky Home-ecky phrase, furthering my dislike of him for making my name synonymous with bad sewing. But I made it, without a pattern, and it did what I wanted it to do. And that’s pretty huge for me.
So here’s the details: it’s two yards of quilt cotton that should be all wrong for me–mint green? Pink? Really? But the flamingos called to me. I cut it to the length I thought would be good, plus seams and hems, then cut that piece into thirds. The back is adjustable, with buttonhole elastic courtesy of Brooke, who kindly sent me some from her own stash when she learned via Instagram that I didn’t have any. Aren’t sewcialists the best? The front waistband is flat, and secured by two buttons– one inside, one out. I fully lined it with some white polyester from my stash, which took my totals down another 2 yards. 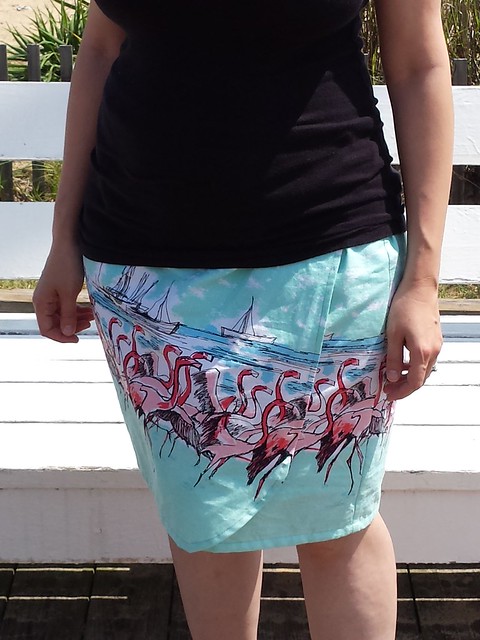 I think my favorite detail is the front curve. I had to wing it, because I didn’t have anything in the room that was round and large enough, and our plates aren’t round either. But I think it turned out really nice!

I was also pleased that I was able to avoid any wardrobe malfunctions, as wrap skirts are prone to. I first wore it for a morning out with Doug and Hobbit, on the boardwalk at one of my state’s busiest beaches, as we had a couple of errands to run at specific stores in that area. It was quite breezy, but my legs stayed covered! 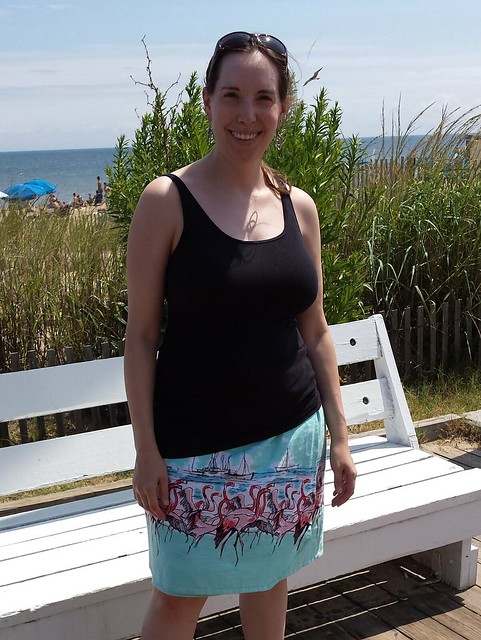 I’m also pleased that I was able to finish it in time for the end of the month, since this fabric just screams summer and probably won’t really work once it starts getting colder. I may have a long way to go to truly get the hang of designing my clothes from scratch, but I think this is a step in the right direction.

17 thoughts on “a study in improvisation”