First off, my last sewing projects of 2018. I had enough free time the day after Christmas to whip up another matching set of Brindille & Twig ringer tees for the boys, in long sleeves this time. I made Hobbit’s in the 4/5 size, and Padawan’s in the 24 month size. (He’s a bit of a peanut, and not quite out of the 18 month clothes even though he’ll be turning 2 in the spring. I strongly suspect I may have to sew several pairs of pants for him this fall, since he seems to be pretty slender for his age.)

And now, all the nerdy number things!

This year, I’ve made: 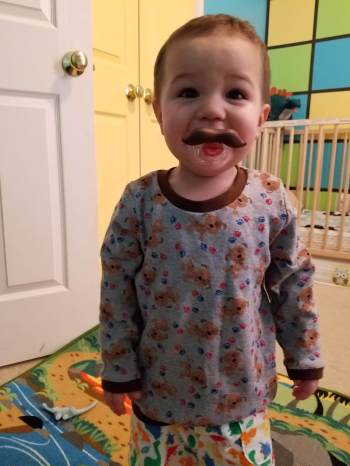 Total: 26 projects for the year. Not too shabby!

Yards of fabric used: 51.5 on record, probably closer to 55. I did have to purchase some fabric to make the boys’ coats, and it never quite made it into my spreadsheet. Neither did this dog jersey.

Total yards in my stash currently: I started the year with 342.5 yards, and now have 394.49.  So that’s a net gain of about 52 yards. Oops. Admittedly, most of this was Christmas gifts from my mom (I just added it up and got nearly 73 yards!!), all tagged for specific projects, as we spent quite a bit of time over the fall chatting about what I needed most in my wardrobe. I love every single piece, and they all fit very well within my color palette that I’ve slowly been refining my closet to, so I know they’ll get used. It’s just a matter of having the time to make them up!

I also had to buy some quilt fabrics, as I kind of got suckered into agreeing to assemble some quilt kits that my mother in law bought several years ago. But I know I can’t just quilt for months without losing my mind, so my plan is to use any sewing time I get at my parents’ house where I don’t need to cut projects out will be dedicated to this until it’s done. (And I totally plan to reward myself with a fun sewing treat when I’m all done, since she’s paying me.)

I also wanted to reflect on some of the long term challenges I took part in this year.

First, the RTW Fast from Goodbye Valentino. I did get through the entire year without purchasing any clothes for myself, aside from some desperately needed bras once I finished nursing, and that fell into the guidelines. I was gifted a few things, though. Like my mom surprised me with several knit skorts over the summer, because I had virtually nothing to wear on my at home days where playing on the floor in skirts isn’t the most practical/it took so long to just make one pair of shorts due to fitting. I think that there was some value in participating, but I don’t plan to continue in 2019. For one thing, it’s bothered me the whole year that the restriction extends to purchasing secondhand clothes. I’ll admit that in the past, I’ve binge-shopped at the thrift store without much thought between “oh, that’s cute” or “I can use this as fabric!” And this did prevent me from doing any of that this year. But given that sewing time is a precious commodity for me, I can see value in supplementing my handmade wardrobe with a few carefully chosen thrifted pieces, especially in categories that I’m not necessarily interested in sewing like exercise clothes. Also, from a sustainability standpoint, it seems ridiculous to force people into feeling like they need to purchase fabric to make some basics if you can save a perfectly good existing piece of clothing from getting incinerated or thrown in a landfill, provided that fit isn’t an issue.

I also didn’t particularly enjoy the Facebook group. I’m not on there as much as I used to be, and that was the sort of group that was constantly filling my news feed because of the sheer number of posts. Plus I didn’t like that people were getting called out/kicked out for things like, one example I remember from early in the year when I was following more closely, one woman getting surprised by a ski trip and needing to buy a coat because she didn’t have one that would keep her warm enough. It just seemed like a lot of ridiculous policing and no grace for life happening, so I stopped following it partway through the year. I think I’ll stick with the Stashbusting Sewalong for my Facebook sewing fix, since that one is all about cheering each other on and laughing when we end up getting more stash anyway.

The 2018 Make Nine was a more positive experience for me. Since I decided to swap out one top for jeans, I got 7 out of 9, which is very good! I also like that that one is more about celebrating the wins, and any projects that get done. I’m also going to let that one go for next year, though I would participate in this one again in the future. I think that after the unemployment scare this fall, and all the derailing of plans that happens with young kids, I’m feeling very reluctant to plan too far in advance. And since I’m also trying to be realistic in my goal making/more carefully build my wardrobe, I think I’ll be better off if I take it season by season rather than a year at a time. So after much consideration, I’ve decided to do the Seasonal Sew 3 challenge instead.

So, here’s my winter plan!

Bonus project: some matching Twig & Tale Trailblazer vests for my guys, to go along with the Sewcialists’ upcoming menswear theme month. Doug is really excited about this one, because my mom made the boys some matching vests a few months ago and he was half-joking about why he didn’t get one, so she bought him some fabric with his favorite hockey team logo plus some corduroy for the outside for Christmas, enough to make matching vests for him and the boys. Since he’s turned down every offer I’ve ever made to sew clothes for him in the past, I’m going to prioritize this one for the season, and plan to start it as soon as I’m done with the Archer. So if I do have to drop or swap something in my plan to something faster, I’ve already decided that the sweater can be pushed off. (Especially since I’ll have to make all of the bias trim before I can do that anyway.)