I know, I know, it’s well over a month into 2017. But I’m not moving fast these days, both physically and in terms of crafting. For those of you  who are just tuning in, my sewing room is becoming baby #2 (aka Padawan’s) room. We’re finally getting to the point where Hobbit is starting to sleep through the night more consistently, thank God! But that means we also don’t want to have another little guy in the same room waking him up at this point, and vice versa. (Even though he’ll really be spending his first few months in the bassinet in our room, since the less walking I have to do for late night feedings, the better.) Anyway, the point is that I’ve officially gone from a sewing room to a sewing nook in our closet, with my fabrics and less frequently used supplies moving to the basement. And clearing this room out has sucked up a lot of the time in which I would otherwise be making things.

Ignore the crappy lighting, since I can’t do anything about it, but here’s the new space! My machines live at the wall that is shared with our actual bedroom, and Doug drilled a hole for a power strip so I could plug everything in. My must-have supplies are in an IKEA cart that tucks nicely under my skirts and dresses. And nearly everything else is in a large downstairs closet that connects to the finished part of the basement.

And look, new machines! I finally have gotten the Janome coverstitch machine set up and tested, and I think this is the beginning of a much more beautiful friendship with my knit projects. In addition, my mom generously passed one of her extra sewing machines on to me, so I have a newer Bernina to play with! While my old machine has more decorative stitches, this one actually has that lightning bolt stretch stitch, and a machine light that functions. Both of which have been handy already. (Let’s be honest, decorative stitches aren’t something I’ve used much  since my teenage years anyway.)

Along with the rearranging, I’ve also been trying to declutter as much as I can stand to, including being really honest with myself about project leftovers I can’t find a use for after years/free fabric people have dumped on me that isn’t my taste/etc. I’ve still got some work to do on scrapbook and miscellaneous craft supplies, but here’s a sampling of what I’ve managed to let go of. (Understanding that I’m a pack rat by nature, and the thought of doing that Konmari extreme declutter horrifies me.  So this is huge!)

And, for the sake of catching up, here’s a quick summary of everything I sewed in January. 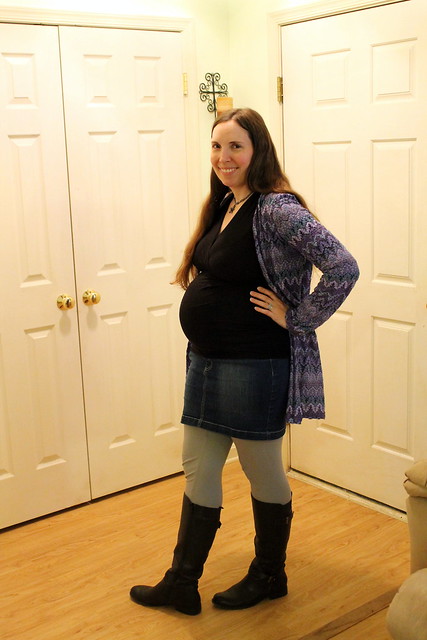 Since it was the only thing on my #2017makenine list that is actually wearable for me at the moment, I made another pair of Cake Espresso leggings, this time in a grey ponte. Technically, I made two, though I finished the second this month. Unfortunately, the second pair is currently unwearable– while this grey ponte from my Christmas haul had a four way stretch, the teal that I used for the second was more of a two-way stretch. As a result, at the risk of TMI, I can’t get them pulled up enough to fully cover my backside. I do have enough fabric left over than I can add some length there, but I’m going to wait until after the bump to try them on again and make sure that’s not the only issue. But I’ll probably just unpick the folded-over waistband and stitch on a new one to give me the coverage I need to be comfortable wearing them. I did get to play with my new coverstitch for both of these, so that was fun!

The rest of my sewing was rather utilitarian. Part of rearranging the closet to accommodate my sewing machines was needing to figure out what to do with our dirty laundry, since our washer and dryer are two floors down from our bedroom. So I recycled one of my old handmade curtains into two new laundry bags. Having something that closes is definitely a must, since one of our golden retrievers is a total kleptomaniac and our socks will be all over the place if he gets a hold of them.

I also have been playing around with a more old-fashioned paper planner this year, since writing things to do out seems to help me remember better. The particular one I purchased is a print-at-home, and one of the major perks for me was having lots of note pages so I can treat it like a bullet journal, and therefore have all of my lists of projects to work on and books to find and whatnot without having to write out my calendar every month. But my binder was boring, and I needed a way to keep my pens with it, so I used up most of some leftover quilt cotton from an apron that I made several years back to make a cheery cover for it. (The button is part for looks, and part to keep it closed in a way that Hobbit hasn’t figured out how to get past yet! He’s starting to figure zippers out, so that was a no go.)

My sewing this month has been pretty slow so far, since I wasn’t able to sit down in the closet cave for over a week. But hopefully I’ll at least finish what I’m currently working on before this month is out! I’ve got a few things that I’d really, really like to finish before Padawan makes his appearance, since I have absolutely no idea how much luck I’ll have in getting both boys sleeping at the same time for awhile. Wish me luck!