So I made another Plantain top, which is the third one I’ve made within the last two months. (The first being the sequin top from the last post, and the second being a pajama top that I have yet to photograph. Soon, I hope.) 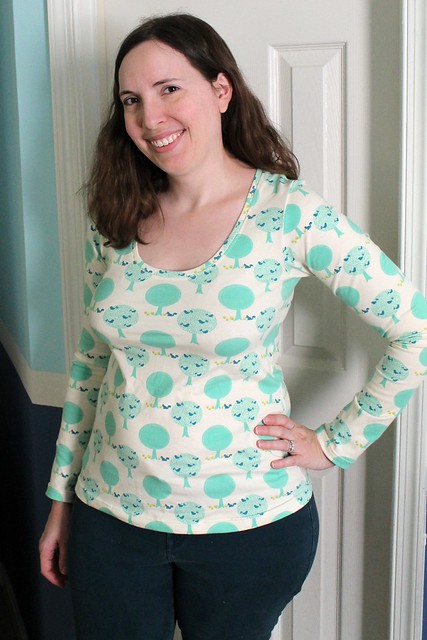 By this point, there’s really not a whole lot to say about the pattern, given that this shirt has become one of my TNTs. The finishing is another story, because I could not get my coverstitch to cooperate for much longer than it should have. After some fiddling with the dials, and some DMing back and forth with Brooke, (thanks, Brooke!) I realized that the reason it kept skipping stitches had more to do with the stitch length than the tension, and that I’d been reading the diagram next to that dial backwards for the entire year or so that I’ve owned that machine. *facepalm* But hopefully now that I know that, using my coverstitch will go more smoothly! I can be excused for sleep deprivation on this learning curve, right? 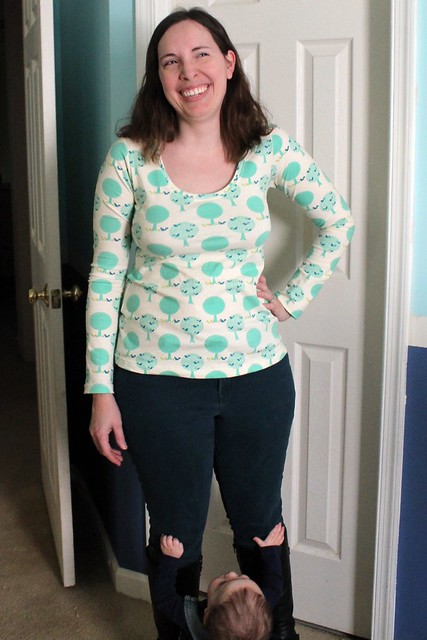 Outtake photo time! (Hi, Padawan!) My biggest complaint for years when it comes to my winter wardrobe is that everything is so drab. And then somehow, I still end up wearing a lot of black and grey and looking like an unhappy little raincloud. (Because rain in the winter is the worst, and that’s the precipitation we get much more frequently than snow.) So I made a shirt out of happy, springy colors instead. With trees and birds and squirrels. Take that, winter! I got this fabric for Christmas about two years ago, and originally meant to make a nursing-hacked Renfrew out of it. But then my experiment flopped, and I realized that the Plantain would be a better fit anyway because I’d have to do much less pattern matching without the bands. As a result of the switch, I have about a third of a yard left of my original two. And that was after some very careful stripe matching. 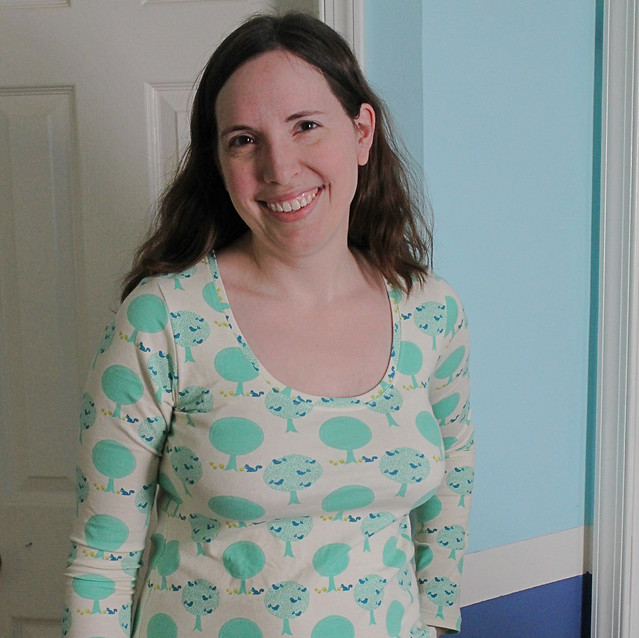 Yes, stripes! I’m totally counting this for the Sew Stripes theme on the Sewcialists blog.  They’re just subtle, that’s all. Board games are a favorite activity around here, when the boys let us, and we’ve started collecting a few preschool games now that Hobbit is getting closer to that magical age that they actually start making games for. One of the ones we’ve gotten is called The Sneaky Snacky Squirrel. We haven’t played that one with him yet, since we’re still working on the concept of taking turns and figured our one cooperative game would be less frustrating for him in that. (He is only 2, after all.) But it turns out that sneaky snacky squirrel also lives in this fabric print, munching acorns under the plain trees, and that makes a stripe!

Speaking of Hobbit, he was pretty fascinated by this shirt when he noticed the print, while I was wearing it today. The conversation went something like this…

Hobbit: (Pointing at my shirt) Trees!

Me: Yes, there’s trees. What else do you see?

Me: Good! Is there anything in the trees, too? 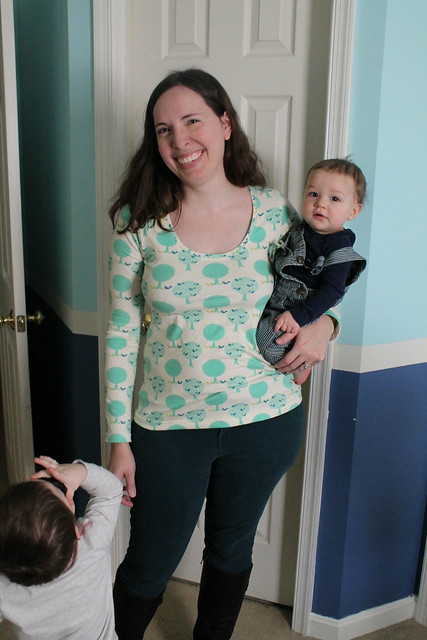 Last outtake shot, since Padawan was much happier for this photoshoot with me holding him. And Hobbit decided my lens cap was an eyepatch. Anyway. I suspect I’ll be wearing this shirt a lot as I drag my feet through the rest of this winter, both for the happy colors and because it’s one of the few long-sleeved things that seem to go with my teal jeans. Weird, since teal is basically a neutral for me. I’ve been thinking a lot about capsule wardrobes over the last few months, and that it would be fun to try one of those 4×4 style ones. And this whole teal/seafoam/ivory color scheme seems like it might be a good one to build off of! Especially since I also have another jersey that I got at the same time that builds on these same colors, with a little brown and mustard thrown into the mix. Now that one will become a Renfrew, I think, though I’m not sure when. Silly me, I’m trying to do deadline sewing again for the #dayandnightdresschallenge, and running out of time! (At least I need the one dress I have cut out anyway.) This idea may need to be revisited.

Also soon to come, I hope, posts about the other multiple projects I have yet to photograph! Specifically, a coat and three sets of pajamas. I’ve been shockingly productive so far this year!

Just in time for Valentine’s Day…let’s talk about a Christmassy project! Because I’m super backlogged like that.

You all know that feeling where you look in your closet and you feel like you don’t have anything to wear, right? That was me at the end of December. (Well, honestly, it’s been me a lot since I started having to purge so many of my handmade clothes out of my wardrobe.) But anyway. My husband and I got invited to a couples’ party between Christmas and New Year’s, and while we were discussing possible babysitting arrangements and such, I realized that I literally had nothing to wear to this party. It’s not like they specified formalwear, but I’ve been so focused on basics, and nursing-friendly tops, and things I could wear to teach in, that I did not own a single thing that would work for a party in the freezing cold dead of winter. 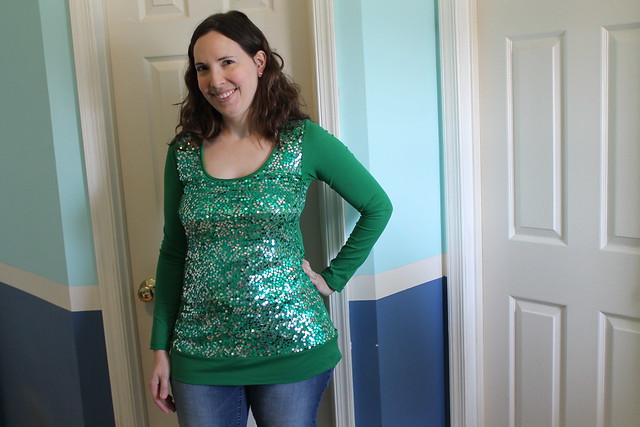 So I decided to do something risky, especially given my usual sewing pace these days (see name of blog): attempt to sew myself a new garment before the night of the party. And I actually did it!

Thankfully, I have one knit TNT left to me after all of my baby-induced sizing changes: the Deer & Doe Plantain top. And I remembered I had a half yard of sequined mesh that was gifted to me during a fellow sewists’ destash. (I’m honestly blanking on who it was, since mommy brain is totally a real thing, so my apologies to the lovely woman who sent it!) I’d paired it off with a piece of this grassy green polyester jersey almost right away, thinking to make it into one of the now out of print Simplicity tops from their Project Runway line. That top never materialized (no pun intended), but I thought I could maybe get the Plantain to work. After a quick Instagram poll to get some suggestions on how best to utilize my precious shinies, in which the consensus was the front of the shirt option, I figured out a way to make it work with the mesh’s 2 way stretch that wasn’t wide enough to cut the front. 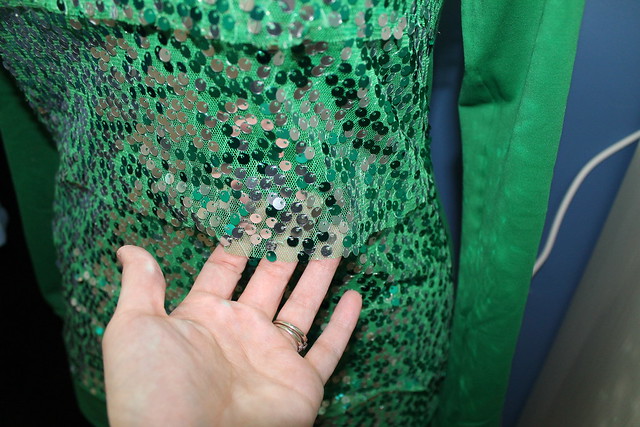 So I cut the mesh into wide strips, overlapped them slightly, and used the stretch stitch to sew them into tiers on the front of the jersey. I didn’t bother to hem any of them, as I wanted to avoid drawing attention to the piecing. The result does make me think a little of flapper dresses, but it worked. And I only broke one needle doing it! Then I trimmed the sequins out of the seam allowances, cut a wider strip of the jersey to sew to the bottom so I wouldn’t have to worry about hemming through the sequins (inspired by the Renfrew, though I just cut the piece to measure with no pattern), and got to work. 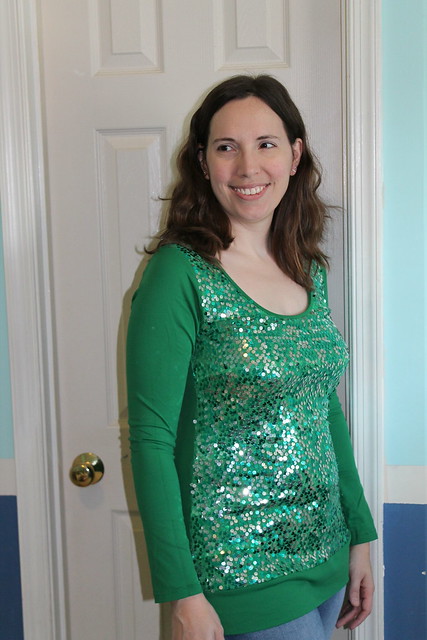 This was a refreshingly quick sew for me. I think, including the embellishment phase, I got this done in about 4 sittings. The most complicated part was honestly just trying not to catch too many sequins in the seams. I paired it with my one pair of black pants, though they’re a little loose at my current sizing, and it worked out great for the party! The only thing I wish I’d done differently was overlap the mesh a little more around the bust, since the extra curves there do pull it apart to the point where the solid green shows if in don’t carefully arrange the fabric. Oh well, it’s not drastic. And I did get a lot of compliments on it at the party.