Does anyone else feel like the summer just got away from them? How the heck is it the end of August?

I’ve been quiet on the blog front, but I’ve actually been sewing quite a bit, and now have a backlog of about 3 larger projects and some accessories to write about, all DragonCon related in some way or another. So for the most part, I figure that by this point, it’s better to just wait and show them off in the context of their respective costumes. I shouldn’t have any trouble getting some photographs there! But I have been posting little bits here and there on Instagram, so I figured I’d share a few previews.

#1: I refashioned a shirt for an Amy Pond costume (from Doctor Who). The shirt I found was almost perfect in its plaid pattern, but I had to pick off this embroidery. Amy’s way too proud to be Scottish to walk around with a US Polo tag on her shirt.

#2: I made a bag to carry around, too, because I’ve been wanting to make myself a bag to use for carrying on airplanes and day trips with Doug anyway. Also, I had TARDIS fabric, thanks to Doug’s Christmas present to me last year, and wanted to make sure it got used! This is just the flap and a piece of the lining, but hopefully I can get a few decent pics of the bag while I’m there.

#3: One costume I haven’t been able to show any pieces of yet is my minion costume (from Despicable Me). These overall shorts are bloody awful and completely unflattering on me, but they were also the only ones I could find at the local thrift shops that weren’t made for toddlers. And I was NOT going to take the time to sew overalls from scratch. But I did create this patch for the front.

And for my foiled plan: I was actually pretty much done with major costume stuff by last week, so I decided to see if I could squeeze out a project that would work for both the Sewcialists’ Tribute Month and The Monthly Stitch’s birthday “cake” month. My plan was to convert the Cake Patterns Red Velvet into a tunic top that I could wear with my skinny jeans. I still think the idea has merit, but after I traced the pattern pieces out, I discovered that the knit I intended for the bodice is too narrow, by a lot if I wanted to have any chance of matching the stripes. So I guess I’ll have to use this piece for something more sleeveless. That idea’s been put on the shelf for now, though I may revisit it with some of my knit stash when I feel less crunched for time.

For now, I’m in the middle of knocking out a Sorbetto that I’d had on my original summer sewing list anyway, so I can add that to my list of clothes to take to Paris. (I need to get on that!) And I also need to start working on my next big project pretty much right away, because a winter coat could take awhile, especially given that I’ll be away a good chunk of September. But DragonCon is only two days away now, and so I need to finish packing! After work, anyway. 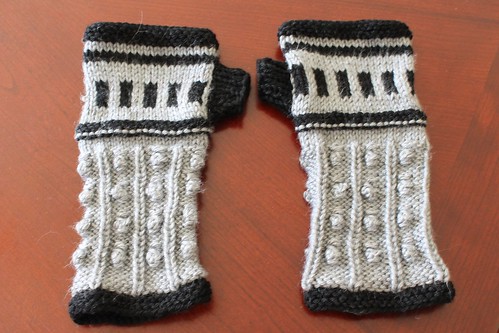 So I finished a knitting project. Despite all of the crafty geekery that’s been going on around here lately, these handwarmers are not for DragonCon! They were a birthday gift for my sister-in-law, who is also very much into all things Doctor Who. (Happy birthday, Julia!)

The pattern is “The Oncoming Storm” by Laura Isaacs. She gives options for knitting in the round and flat, and I chose to do the flat version since this already had a couple of things going on that were new or fairly new to me– I haven’t done that much knitting with multiple colors of yarn, and I’d never had to pick up stitches for a thumb before. So for the latter in particular, I figured it would be simpler to just leave a hole when sewing it up instead of lots of binding off for a thumb hole or whatever. 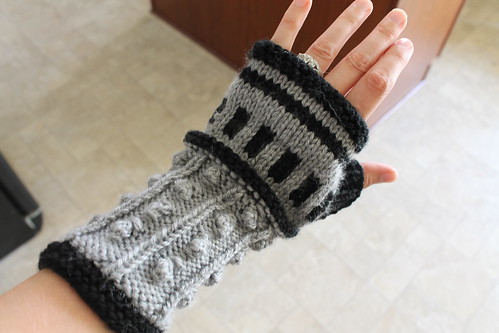 The black yarn was leftover from Doug’s hat, and I’d actually purchased the grey yarn for this (Caron’s Simply Soft) about 2 years ago, because I’ve been meaning to make these for her for that long. But, time being the wibbly-wobbly thing it is, it got away from me a bit and I just never seemed to be able to get them started. So I started knitting these back in January, because I figured if I did that, surely I could finish them by August! I probably would have finished them a lot faster, if I hadn’t been doing things like taking Craftsy knitting classes with my mom, working on that never-ending cardigan, and having my usual springtime work-induced carpal tunnel flareups. So it was very stop and start. But I did finish these around the end of July, save a quick wash and light blocking that I had to do last week. I don’t think the blocking made much of a difference in the stitches since it was all acrylic yarn, but one of the silly dogs likes to carry things around in his mouth, so he’s perpetually stealing things like any sock he can get his paws on, and my pajamas. And apparently, one handwarmer, because I was dumb enough to leave my knitting bag on the sewing room floor. You just can’t give family members gifts that are coated in dog slobber, you know? 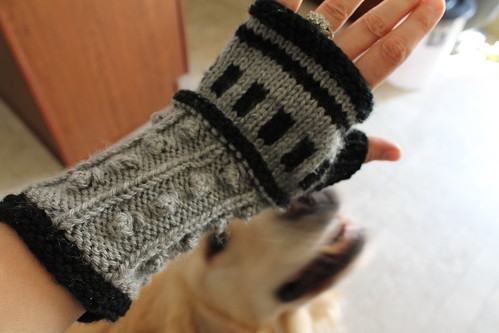 Aside from having to figure out the picking up stitches thing, they went together pretty easily, and I’m feeling a little more comfortable with switching between colors now. I do still have a pretty good chunk of that grey skein left over, and a little of the black, but I figure I can always use that to make Doug another hat or something. Hopefully it won’t take me another two years to get to that.

I didn’t manage to get a picture of both mitts on, because Doug was working on a messy house-related project outside at the time and I didn’t want to interrupt. But I can leave you with a canine photobomb shot!

Let’s be honest here: pattern hacking is not my strongest sewing skill. Given enough time and the amount of stubbornness I’m willing to throw at a project, I can sometimes make it work, like the three-muslin wedding dress bodice. Sometimes I get lucky and things turn out as planned right away, like the TARDIS skirt (aside from my occasionally wonky reverse applique.) But most of the time, I end up with something patched-together and not very pretty, like the last major Franken-shirt I attempted. And then I just wonder where my math went wrong (somewhere around the 6th grade, probably) and envy Heather‘s mad hacking skills. 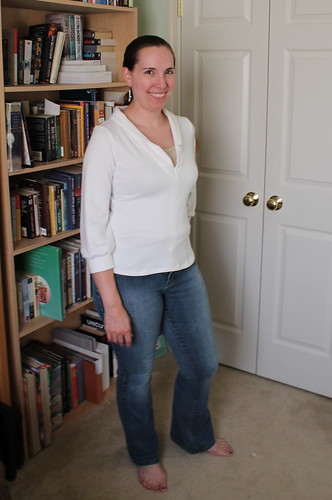 This project is somewhere between the two extremes. I think I may have had better luck with it because it’s a knit and those are generally more forgiving.

In true mad scientist fashion, I mashed together three patterns, from three different companies. The collar and the general shape of the front came from New Look 6922, the sleeves were a narrowed-out-of-necessity version of Simplicity 2852, and the back/reshaping of the front and sleeve caps/cuffs came from my Sewaholic Renfrew. I knew I wanted a slim fit for the top, because the only reason I made this shirt at all was for my Belle costume for DragonCon, and I needed it to fit smoothly under my Monetta-Tiramisu mashup from June.

This wasn’t without its drafting issues, for sure. I picked the New Look pattern for the general shape of the collar, because I had no idea how to get something that looked like the shape of what’s on her shirt. And I did things like hold the pattern pieces up to myself and measure and everything, but it still ended up being a much lower-cut neckline than I intended. I also ended up having to rip off one of the cuffs and resize it, because it wasn’t nearly as fitted as I wanted. I think I ended up cutting about 2″ off of it. 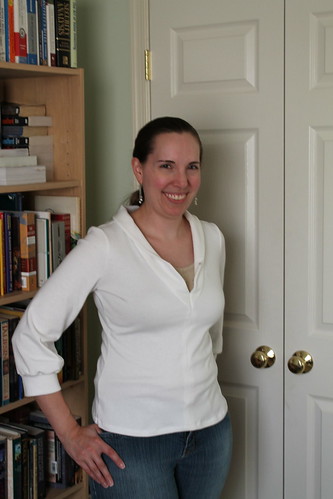 You can see the sleeves a little better here, as well as the general shape of the collar. I was originally thinking of making this a cardigan, but when I realized the collar was way too long, I just sewed it down the center front instead to give it a little more shaping. Draping it over myself didn’t help here, either. Like I said. My franken-patterning needs work.

You can probably also see that greyish dot on the collar… I ended up sewing two sets of hooks and eyes on there to close it up some so that the collar comes together where I want it to for costume purposes.

I did bust an entire piece of fabric for this one! I had a tube of rib knit that was pretty useless for t-shirt making, because I’d have to dye tiny little pieces to match whatever shirts I was making, and who wants to do that? So I just managed to squeeze the whole thing out of it. The fabric was free anyway, in the category of things that people gave my mom that she couldn’t use for quilts, so no loss on my end except to the yardage tally on my stash. I’ll take it. 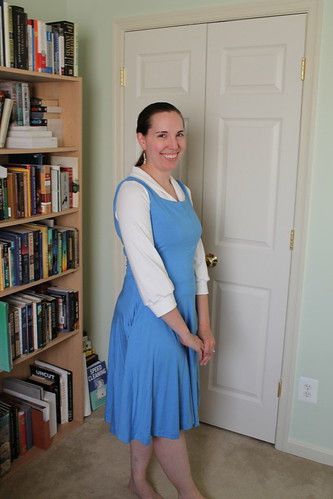 And here’s the costume so far! I still need to make a half-apron and a hair bow, but the two major components of this outfit are done, at least. I think this one will be a pretty comfortable one to wear all day, too, given that it’s all knit. 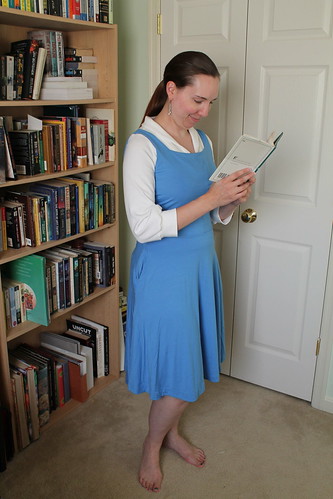 And of course I had to do a pose with a book, given that I was in a library and it is Belle.

So I think the costume end is shaping up nicely, though unlike the dress, I’m not sure I’m ever going to wear this shirt outside of this weekend. It just doesn’t feel like me, you know? Maybe if I dye it or something. I don’t know…what do you think?