Oh, hi again! I seem to be having trouble keeping up with actually taking photos for this thing, aside from bad phone selfies. So here’s another post of summarizing an entire month’s work in one fell swoop! Because, really, it’s just one project. 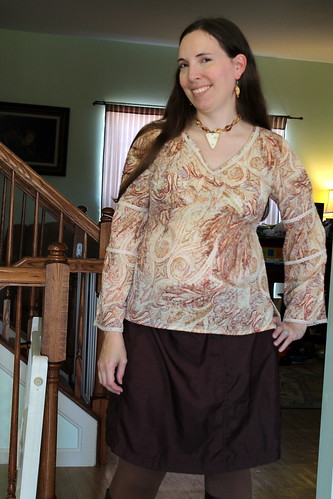 I thought I was soooo on top of things for fall sewing. I mean, I cut this shirt out in the beginning of August, and I actually did finish it in September. I just wasn’t expecting it to take 6 or so weeks to make a fairly simple shirt from a pattern that I’ve used before, you know? This was one of the shirts that got delayed because of things like tea dyeing trim not working, and running out of thread in close enough colors. But hey, I busted some stash. And it’s stash that’s been around for a decade or more. So yay for that.

Of course, after all that, I got to wear it all of once, and have no idea when I can wear it again. After all, though this fabric is a lightweight one, and the sleeves have plenty of ventilation, it’s also polyester. And it took until pretty much this week to stop being in the 80s or more all the time. 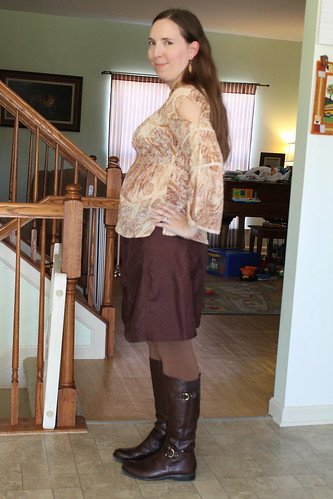 Yeah, that’s right… I found out pretty much right after I cut this thing out that, guess what, I’m pregnant again! And the bump is definitely more obvious earlier this time. I just hit the second trimester as of today, but I’ve already been digging into my maternity clothes for about 3 weeks now. I’ve still been able to wear some other things, like my Sewaholic Rae skirt and my Espresso leggings that I’ve paired with this shirt for my photos. The leggings are still super-comfy, but the elastic waistbands on the Rae skirts are getting annoying to wear because there’s just nowhere good to put the waistband anymore. So I guess those are also going to be shuffled aside until the late spring. (I’m due mid-April this time.) 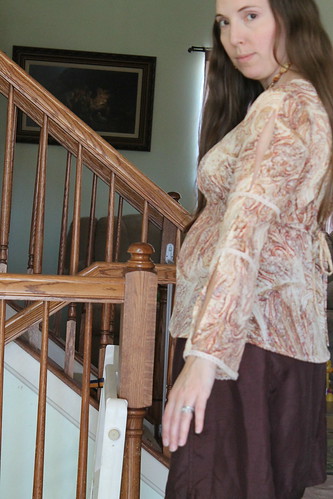 This was one of the best shots I could get of the sleeve, working on my own with the tripod, and you can see the back a little here too. So here’s the details:

The pattern is Simplicity 5595, which I’ve made a few times before. I made a few small tweaks to it. Mostly adding a bit of flare to the sides so I could add several inches of length, because while the ones I’ve made before still fit (or, well, fit about 2 months ago), the changes in my figure over the last couple of years mean that they’re just a little short for my comfort. They work with camisoles underneath, but I didn’t want to have to restrict myself to that with this one. I also made my usual change of adding length to the sleeves to accommodate my monkey arms, but it was barely enough. They do hit my wrists, but if I move my arms into anything other than just at my sides, they look a little short. Oh well.

One construction change that I made was the original pattern called for just letting the sleeves flop open underneath that middle row of lace. But I wanted mine to stay in place a little better, since I’ve been doing a lot of little toddler-friendly activities with Hobbit that sometimes involve messy materials, and the floppy sleeve bit would just be annoying for things like cooking dinner. So I used a third row of lace to keep the slit together at the wrists. And I think I’ll like it much better that way.

This isn’t my favorite iteration of this shirt, especially as the color palette is along the lines of “what was I thinking”. (Note to self: in the future, avoid prints with backgrounds that are essentially your skin tone.) But it pairs pretty well with this skirt, which seems to be one that I’ve oddly had trouble putting together outfits with, considering it’s neutral. And I’m guessing it’ll probably fit again at some point, so maybe it’ll get more than one use?

So my total for September was about 2 1/2 yards out. And about 1 1/2 yards in that I bought for a baby gift for one of my cousins. But that is already sewn up and will be out the door this weekend, so I’m not counting that for stash!