If you follow the Sewcialists blog, then you’ve probably heard that this month’s theme is all things Disney. And I’m co-hosting! So I’m really glad to be done with the coat so I can actually, you know, make an outfit for this.

Since I already channeled my favorite Disney bookworm earlier this year for DragonCon, I decided to look a little further back into my childhood for this one. I grew up watching Disney cartoons–one of the things that I always looked forward to during family gatherings was that my grandmother would try to get the latest Disney movie on VHS, and my cousins and I would all watch it together. And if there wasn’t anything new, we’d watch older classics like Cinderella or Peter Pan. I enjoyed those, of course, but the first one I really remember latching onto was this one:

I have this vague memory of this being the first movie that I actually saw in a movie theater, though I guess that depends on how accurate my memory is–after all, I would have been around 7 at the time. But I loved this one. Especially the music, and all of the underwater prettiness, though I’m also pretty sure this is where I got the idea that my hair should be red and if it doesn’t agree, then I should just give it a little help! (Now if I could just get her volume…)

I don’t want to go all-out costume for this one, especially since a shell top and tail just isn’t something I want to be seen in out in public! So I’m taking my inspiration more from her going around town/”Kiss The Girl” outfit:

I actually already have the top done, so I’ll give a little sneak preview!

It sits a little wonky on Donna, but here’s what I came up with! I really thought about making the black neckline more of a sweetheart shape, but with some careful basting, managed to get a mostly clean line for the notch.

It’s a Renfrew, of course, with some modifications for the color-blocking and also a raised neckline. Now that I look at the Ariel picture again, I probably could have left it a little more scooped, but I’ll be warmer this way. Since I’m all about the stashbusting, and some of the pictures look more off-white and some more light blue, I used an ivory jersey for the top/sleeves and the leftover black interlock from the dress I made over the summer for the “corset”.  I just barely had enough to squeeze this out–I couldn’t even cut the band for the bottom, so it’s just hemmed. I’m hoping this won’t look too blatantly costumey if I pair it with cardigans or jackets or whatever, but I do like the look of it, and I’m quite happy that my hack turned out the way I wanted it to! There may have to be more color-blocked Renfrews in my future. Because that’s a way more interesting use of plain colored fabrics, IMO.

More pics to come once I figure out what I’m doing about that skirt–I was originally planning to make a Gabriola, but it isn’t going to work at this point. So I’ll have to improvise. Looks like it might be my old Burda magazines to the rescue… 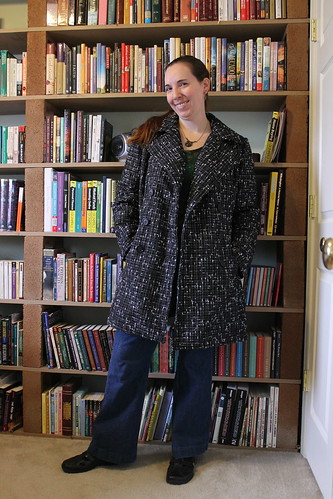 The coat is finally done! It took a lot longer than I’d planned, mostly due to my sewing mojo being the lowest it’s been since I was in grad school and trying to juggle that, my TA duties, getting a teaching career going outside of the university’s music school, and actually seeing my friends on occasion. But I did the last bit of hand-stitching and sewed on the buttons last night, finishing it just in time for the cold to come. Literally. Yesterday it was in the 60s, and today we might scrape the upper end of the 40s if we’re lucky. Brr.

Since I’ve used this pattern before, there isn’t really a ton to say about it. I did do several things differently this time, mostly involving hand-stitching all of the internal seams down because they weren’t pressing flat enough, and underlining. I used up that silk organza I’d mentioned in a previous post to underline almost everything (I didn’t have quite enough for the sleeves, so I left it out of there), and I also underlined (interlined?) the lining with Thinsulate. Which was way less time-consuming in the long run than my last coat, where I quilted two layers of quilt batting into the lining. This coat is still heavy, though! I think it’s mostly due to the outer fabric, which is pretty thick and heavy compared to the suedecloth I used for the last coat. Oh, and I had to draft the pattern piece for the collar stand, because apparently I also failed to return that to the envelope the last time, along with the first page of directions. Organization fail. Maybe next time I need a coat, I should just get a new pattern! 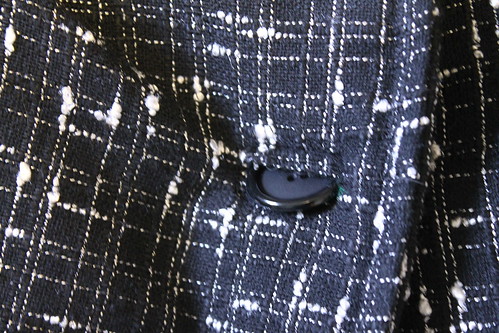 Oh, and I did bound buttonholes! This was my first attempt at doing it, and they are a little wonky in spots (also probably due to the thickness), but they blend in well enough with the fabric that it isn’t blatantly obvious unless you’re looking up close. I did cheat a little bit–the original coat pattern calls for an additional buttonhole on the part that goes underneath the main buttoned-up part, to attach to a button on the lining. But honestly, I rarely, if ever, buttoned it there when I was wearing the other coat. So I figured I’d save myself some time and skip it! I also stole the buttons from the old coat, since they were still perfectly good. 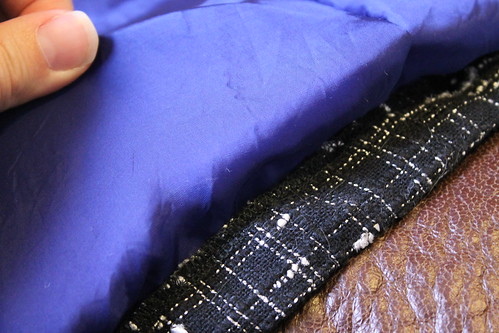 I cheated on the lining a bit, and just shoved the raw edge of the lining underneath the serged edge of the coat and hemmed it on machine. At that point, I just wanted it DONE. But honestly, I think it will hold better in the long run than hand-stitching on this particular fabric, and since the lining pleats over top of the hem, you can’t even really see that serged edge.

This project may have taken forever, and it was honestly sheer stubbornness combined with my fear of cold that pushed me to finish it. But it was great for stashbusting! All together, I completely used up 3 yards of that tweedy stuff on the outside, 2 yards of Bemberg lining, and about 3 1/3 yards of the organza–it wasn’t full width everywhere since it was leftover from a previous project, so I had to do some creative pattern work. I do have a decent-sized piece of leftover Thinsulate, so I’ll need to figure out what to do with that at some point. 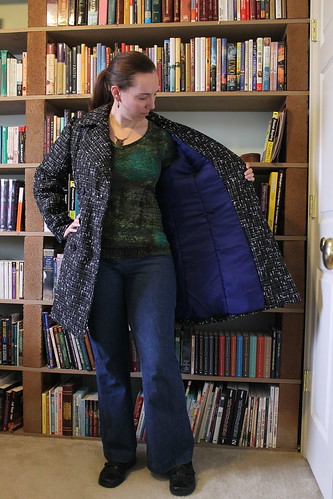 So, one project of my FESA plan down, finally.  I’m hoping I can still squeeze in my SewDisney project before the end of November, but I’m starting off with a Renfrew hack, so this should theoretically go much faster! And at least I’ll manage to stay warm in the meantime. I hope. Since this is me we’re talking about, after all.