Did you see that the Sewcialists blog is up and running again? Hurrah! I was happy to see that the first challenge of the reboot was one that I could easily participate in, since I’ve been missing out on The Monthly Stitch left and right. This actually wasn’t my original idea, I had a plan to make a skirt, but it involved some pattern hacking and using uncertain fabric amounts. (I was going to use some leftovers, but I still need to fix a pair of leggings that I made back in January or so first, so I’m not sure how much fabric I actually have left.) But it’s ok, because I accidentally stumbled into another tribute!

I’m sure you all know and love Gillian, from Crafting a Rainbow. She really does have one of the most inspiring blogs out there, IMO, between her talent for getting really good sewing conversations going in her posts, and the fun challenges she’s put out there over the years. Like the sewing dares– I haven’t forgotten about the two that I’d gotten on the last round, by the way– and the Better Pictures Project. And, well, I may have blatantly copied one of her recent pieces, right down to the fabric. But, to be fair, she’s the one who suggested the pattern to me in the first place! And since she’s the one who got the Sewcialists rolling again, it’s only fitting to do the tribute to her. 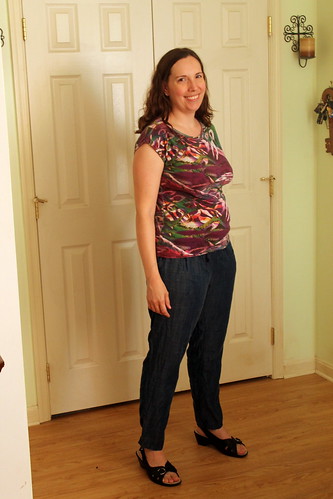 That’s right, I made the Jalie Vanessa pants. In the same tencel denim from Cali Fabrics. One of my biggest wardrobe holes right now is pants, since pretty much every pair I’d ever made or bought stopped fitting about five trimesters ago (may you rest in peace, oh pile of Thurlow pants in my refashion bin). And since I don’t want to teach my flute lessons in yoga pants– or, really, be the yoga pants mom at all, unless I’m actually exercising — I definitely needed some options. I was a little skeptical about the jogger pants idea, since I never really liked the look of sweatpants. And the elastic cuffs that were one of the options just remind me of growing up in the 80’s. (This is not a good thing, since I’ve never been a fan of that particular fashion decade. Needless to say, I went for the straight hem.) But I think these actually turned out okay. 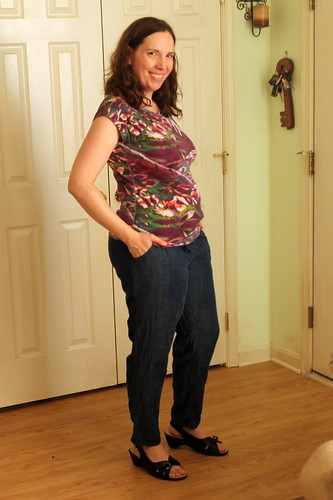 Besides, they have functional pockets, and that’s more than I can say for pretty much every pair of jeans or shorts that I managed to scrounge up at the thrift store.

I’m still not exactly sure what to wear them with, since the more relaxed fit means that looser tops are pretty much out. Ideally, I would have made a top to go with this as part of the outfit challenge, probably something from Cashmerette since that’s one of Gillian’s favorites. But you all know how slow I am at assembling anything these days, so I just pulled out one of my most colorful tops in a palette that seems to most closely fit Gillian’s. (My first Kirsten Kimono tee, even though it’s still overly snug on me.) 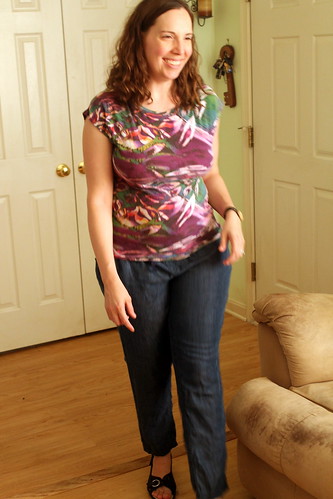 The walking out outtake actually was one of the better pictures! So styling questions aside, I will say that these pants are super-comfortable to wear. A big part of this was the fabric, I think. The tencel denim is really soft, and even though it developed an odd fuzzy look after the first wash, I haven’t had issues with the dye bleeding into my other stuff yet. I’m trying to figure out what might be some good options for a potential second pair sometime, since I feel like the challis it calls for would be too lightweight. Linen, maybe?

I was quite happy with this first Cali Fabrics order– I got this and a second piece of fabric that got turned into a scarf pretty quickly. I seriously doubt it will be my last order from them. (Just the last one this year, since Doug and I made a deal– I wouldn’t buy any more fabric this year if he stops buying Coke. The sacrifices one makes for love. )

Anyway, I’m happy to get to take part in this community again, and I’ll be looking forward to seeing what the next challenge is!

Warning: slightly ranting, rather candid post ahead. This was originally going to be a post about a shirt that I finished about a month ago, though I just got around to photographing it this past weekend. Though, really, I don’t know what to say about it, because once again, the results just aren’t what I wanted them to be. 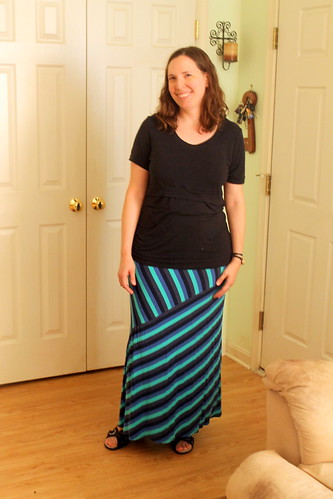 The concept was good. I took my Sewaholic Renfrew pattern, and the concept from a nursing top that Heather kindly sent me back during my first pregnancy, to attempt to make a boring, basic black tee. Because I somehow didn’t have one, and given my love for bold print skirts, this was a serious hole in my wardrobe. So I used the front band and the instructions from my Peekaboo Patterns nursing camisoles as a guideline. As you can see, it didn’t turn out as well as I’d hoped.

I know exactly why. It was a combination of the pattern size being wrong (measuring for my nursing chest size is failing me at every turn lately) and the rayon knit being too drapey to have what turns out to be the necessary recovery for a shirt with two holes in the front. It’s already sagging to just below the covering band, despite the fold over elastic I put there in an attempt to keep it snug to my body, and I think I may have to sew the front completely closed in order to keep this wearable. Which defeats the entire purpose of a nursing shirt. At least the skirt turned out ok, even though all I did was buy it at the thrift shop and shorten it a few inches. The waistband was up to my ribs before–an odd feeling, since I’m not short! 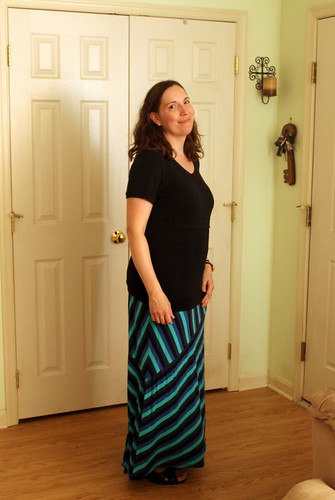 My apologies if this is sounding like a downer. But the truth is, I’m frustrated, and I’ve been getting increasingly so for awhile. Looking at these pictures, you can tell that I don’t feel great about what I’m wearing. Honestly, I haven’t felt great about almost everything I’ve made for awhile now. I was thinking about it today, and for the entire past 12ish months, I really only have two projects, that weren’t super-simple basics, where I feel like they look decent on me and really suit my style. I showed a picture on Instagram of one of my currently in-progress projects that’s also turning out to be less than I’d hoped, and a (kindly meant and worded in a constructively critical way) comment that I might be better off just cutting a different shirt entirely out of the fabric and starting over nearly sent me off crying. I feel like I just don’t know how to sew for myself anymore, and given that I’ve been sewing mostly clothes for coming up on 30 years now, that thought is horribly depressing.

It’s a hard place to be, sewing for the in-between. I recall having issues after my first pregnancy, and having a few misses on trying to sew for nursing-friendly and more changeable sizes than I was used to, but I think it’s actually hitting me much harder this second time around. I wasn’t expecting to have two kids less than two years apart. And while I wouldn’t trade Padawan in, he really is a sweet and happy baby most of the time, having two pregnancies this close together has really done a number on my body. I’m actually in physical therapy right now, because my hips got completely out of alignment between the two pregnancies and it was starting to make just normal, everyday walking painful. I also started this pregnancy at a higher weight than my first, since I only had something like a month between finishing up with nursing and getting pregnant again, and didn’t have a chance to drop those last few pounds. Long story short, I feel like I’m sewing for someone else’s body now, and I just can’t seem to get the hang of it. My older clothes are still too small, trying to sew looser/more forgiving silhouettes are resulting in things turning out too big, and I’m not even sure what looks good with all of these extra lumps and bumps that I have now. I just feel frumpy pretty much all the time. And of course I’m complicating things further by breastfeeding.

I can’t give up sewing, it’s too much a part of me. But I am seriously beginning to wonder if I should just step back from clothes for now, and focus on stuff like the boys’ Halloween costumes that I’m working on/all of the boring-but-necessary sewing that I’ve been procrastinating on (oh, hi, bedroom curtains that shrank shorter than your lining two years ago). I’ve never had a sewing slump like this one before, where I consistently have far more misses than hits. It’s demoralizing, especially when it’s been such a struggle to get sewing time to begin with. And until I’m 100% sure that I’m done with having babies and massive weight shifts, I don’t know what to do about it.