If you follow me on Instagram, you’ve already seen the big reveal photo. But of course I still have to share it here, because the first costume is a big milestone in the life of any kid raised by a geek, right?

Anyway, we didn’t really bother with Halloween this year, since taking an only child who can’t eat solid food yet is just an obvious parental fabric grab. (He ended up being asleep when the kids in our neighborhood were out anyway, so it’s just as well.) But I still wanted to make him a costume. I’d figured maybe I could just run an errand somewhere to show it off, but then one of my good friends told me about a local Halloween parade the Sunday before. She has a toddler and a boy that’s 3 days younger than my own, and we’ve already decided that the boys are going to be friends (at least as far as we can encourage it), so we took them out for their first Halloween event together. So, without further ado… 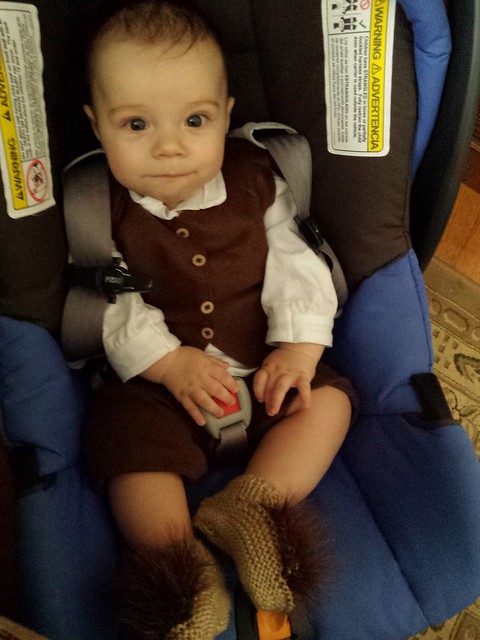 Hobbit as a hobbit. Bet you never saw that coming, right? The catalyst was the booties, which my mom knitted and gave us last Christmas. So I decided then that a hobbit lad or lass had to be the first costume. It was a pretty easy costume to put together, minus the struggle of finding hands-free time to do it. I ended up resorting to going to my parents’ house early on several teaching days, and sewing while my mom held him. (Naptime crafting…the struggle is real.) The shirt and vest are the components that I made. He already had brown knit pants in his current size, so I just folded the hems up to shorten them. 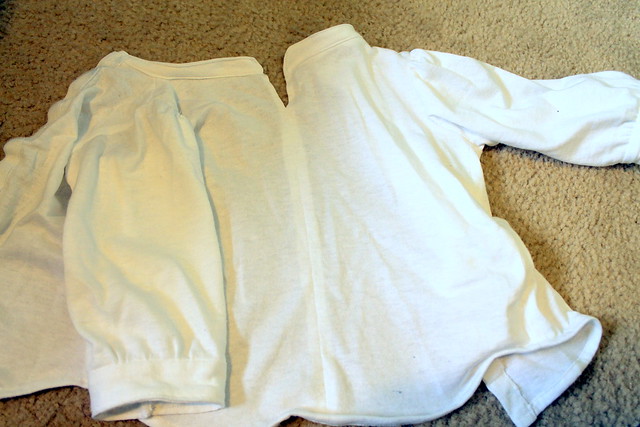 I didn’t have patterns for either piece, so I had to trace off some of his clothes and draft my own. I used a button down shirt as the basis for the shirt, but decided that I didn’t want to bother buttoning up a shirt that the front would be mostly hidden on. Hobbit is very squirmy when one tries to dress him now! Besides, my fabric source was a white t-shirt in my refashion bin. So I used Velcro in the back to close it up easily, and seamed the front to facilitate the faux button down look. I based the look off of Frodo in the movies, since my little Hobbit’s hair color is closest to his, and his look is less of a choking hazard than Pippin’s scarf. That shirt has a Mandarin-style collar, so I just used the collar stand by itself, finished the edges down to the center front seam to make a sort of v-neck, and left it at that. I altered the sleeves to add some gathering.

The cuffs were a tricky decision. I could have finished them more cleanly, but that would require sewing tiny cuffs and sleeves in the round. So I opted for the simpler route and finished them flat. I probably should have sewed the bottom of the cuff seam first and then stitched in the ditch to attach the lining to the sleeve, rather than fold the seam allowance under and topstitch like I did. But I didn’t think of that till halfway through the first one. I blame sleep deprivation. 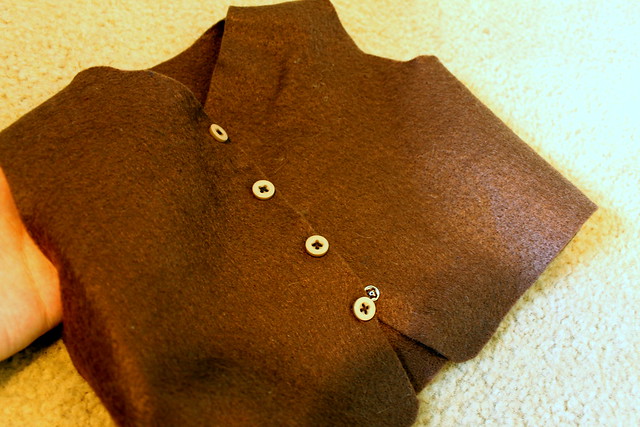 As for the vest, I traced off a fleece zipped one and modified the front. I did have it cut out of a stashed piece of brown fabric that was too little yardage to make anything adult-sized, but ended up ditching that in favor of craft felt, because I was running out of time and felt doesn’t need edge finishing or lining. So four seams + snaps hidden under buttons = done. The bonus is that it looks kind of like wool, without me having to touch it. It burnssss ussss, we hatessssss it, Preciousssssssssss! Goll….ahem. 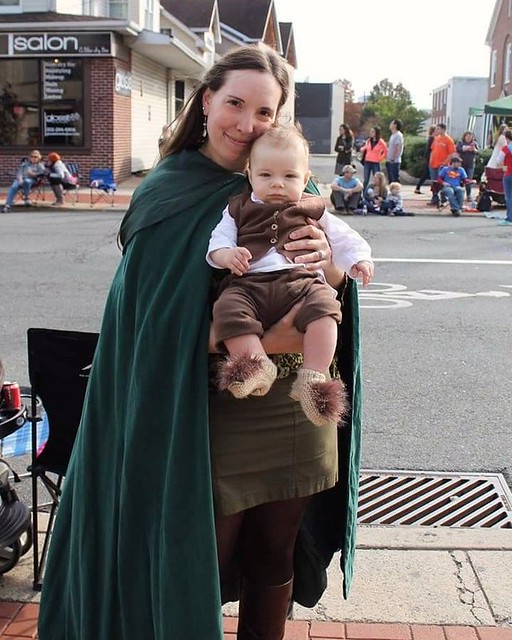 He seemed comfortable enough, and he was definitely cute! I’m already pondering what costume to make him for next year–he’ll probably be old enough to go out, but not old enough to go up to houses alone. Obviously, this means I need to dress up with him, right? Oh, darn. I did try this year– I didn’t have time to sew anything new, so I cobbled together a vaguely Elf-ish outfit out of my olive green Hummingbird skirt (which is snug, but zips up now, yay!), a funky-sleeved shirt that I made back in college and still love, and my costume cloak that I sewed up years ago. And boots. Always the boots.

A quick note about October totals: 4 yards out, plus the t-shirt from the bin, no yards in. I think that leaves me with around 347 left. I will need to buy fabric before the end of the year–all signs point to me needing to make a fourth size of diapers, because he’s already on the largest snap size for the small and so there’s no way medium will last me till he’s potty training age–but I’m in good shape to hit my goal of ending the year with less fabric than I started with.

As promised, my other two Fall Essentials Sew-Along projects for this year! Both named after beverages that I don’t drink– when it comes to coffee, I’m Team Tea forever. And while I will drink the occasional glass of wine, I’m the type who would rather play it safe and abstain while I’m nursing. So I haven’t had a drop of that since the France vacation last year. But that’s a good way to end it, no? 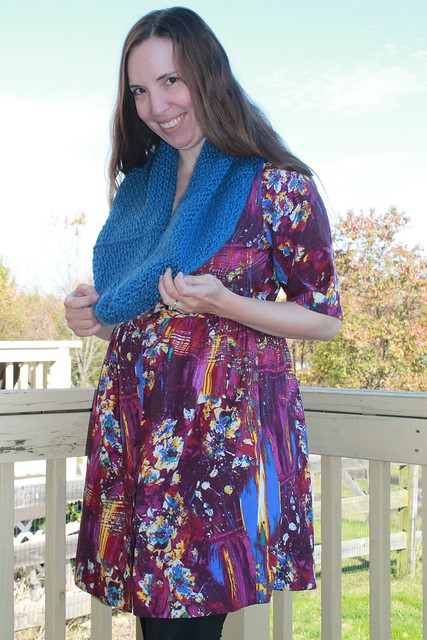 Let’s talk about the knitting first, shall we? This is the Wine Country Cowl, which was a free pattern that I found via Ravelry. The great thing about this pattern was that it was super-easy to memorize, which meant that it was a great pattern to ease me back into knitting while totally sleep-deprived.

The yarn I used is the now-discontinued Ella Rae Latte, which I bought for the top part of a sweater that I abandoned because I could not figure it out for the life of me. I thought it would be a bulky enough yarn that I could burn through all four skeins by making some slight modifications to the pattern–mostly knitting it on smaller needles than it called for (size 11 vs the original size 16) and adding 10 more stitches to every row. But I’ll admit that math is not my strong point– I often joke that, as a musician, my math skills extend to counting to four repeatedly– and so I ended up using just over two skeins. Doh. I haven’t figured out what to do with it yet, but I’m guessing a hat shouldn’t be it. I was ok knitting it, but the yarn is admittedly a bit itchy to wear on my neck due to the 30% alpaca content. Maybe I should avoid alpaca in my future yarn purchases, along with all of the other wool. Sigh. 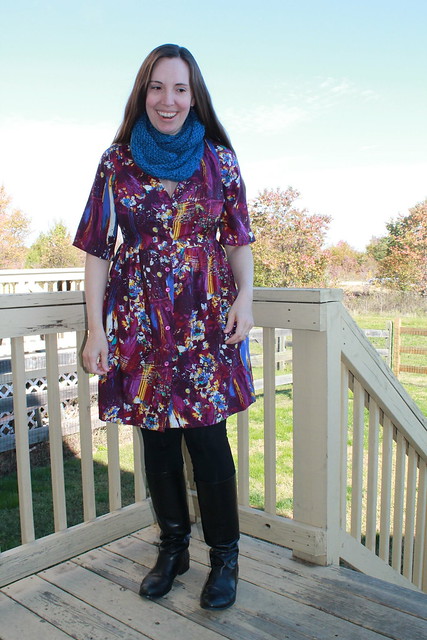 The cowl itself isn’t quite the big, long, chunky thing that I wanted it to be. But it should be warm enough. And the color goes pretty well with my Darling Ranges dress!

The final component of this outfit is the leggings. I used the Cake Espresso pattern this time, and it went sooo much better than the Manila leggings that I tried earlier this year. Mainly because I wasn’t surprised by the length being cropped. And my fabric actually stretched the right way. Imagine that. 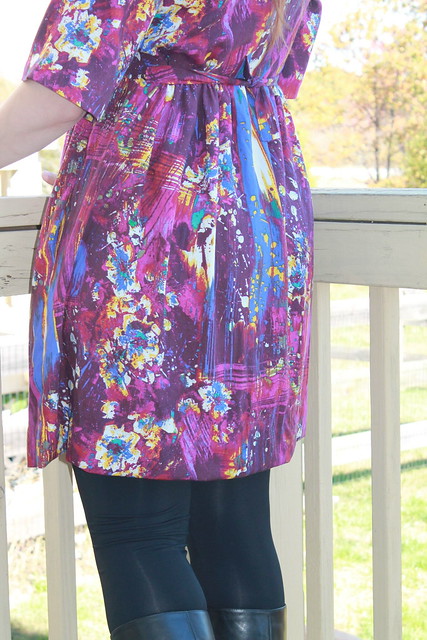 I’m recycling one of the photos from the last post, because it really does show the leggings the best. At least, as much of them as I’m willing to reveal. I’m sorry, but the internet doesn’t need to see my postpartum pudge, ok? Plus the fabric ended up being a little too sheer for me to be comfortable showing the upper portion.

As you can see, they’re not perfect– there is a little extra fabric around the knee. But I’ll let you in on a little secret: they weren’t 100% done when these pictures were taken. Hobbit didn’t quite nap long enough for me to hem the legs, but I figured they were done enough for these photos, since I’ll most likely end up always wearing them as tights with boots anyway. I’ll have to check the length again before hemming it, because I’ve already made some alterations!

It somehow ended up very high-waisted when I connected the dots. Like maternity high waisted. I cut off an inch before even sewing the waistband, and after wearing these for much of the day on Sunday (still unhemmed), I decided to take off even more. The waist elastic also ended up being too loose, so I just cut the whole thing off, tightened up the elastic, and sewed it again. Though I haven’t tested it in the real world yet, since I still need to hem it (hopefully today) it’s already much more comfortable. It’s probably something like 3 to 3.5″ lower than where it started. Hopefully I’ll remember to do these adjustments to the actual pattern the next time I make these. I do have fabric that could make a second pair, and I can see how these could be addicting to make. Once I got the pattern drafted, it was so fast and easy, and that’s just what I need for layering pieces right now.

I do need to figure out what to do with the rest of this knit. I bought extra with the thought of making up the skirt of a second Cake pattern (the Red Velvet dress), but the fabric I had in mind for the top wasn’t wide enough. I have about 3 yards of it left, since the leggings ended up taking less length than I anticipated, so the obvious choice is some kind of black dress. After all, a musician can never have too many of those, and I don’t know when or if my old performance dress will fit again. But it’s kind of slinky and drapes heavily, so I’ll have to be very careful with my choice of pattern. I haven’t had a chance to look through my own pattern stash for possibilities yet, but any suggestions? 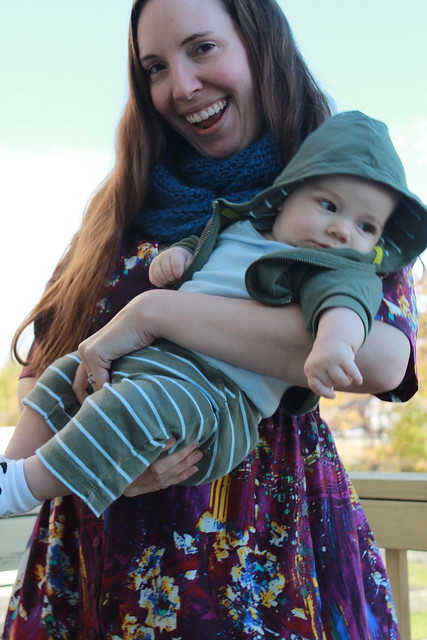 I’m going to leave this one with one of the outtakes from the cowl pictures, just because I like it.

And that wraps up my FESA for this year! For once, I picked a perfectly reasonable number of projects. And I’m quite happy that I actually finished my list, and ended up with three versatile pieces that make one cute outfit. Bonus: since I’m technically finishing these in November, I may be able to actually participate in this month’s theme at The Monthly Stitch (capsule wardrobe), if I choose my next project wisely. I should plan all of my future seasonal sewalongs like this!