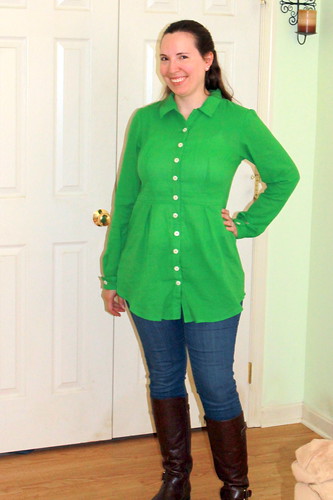 I’ve been eyeing the Deer & Doe Bruyere for quite some time, and I finally got around to trying it out! It took me basically an entire month, both because I had to schedule time to go to my parents’ early on teaching days so my mom could occupy Hobbit while I sewed, and because the cotton voile that I found to use as a wearable muslin was sheer enough that I had to French seam everything. (Except for the armholes, because I have never found a way to make that work.) But I think the effort was worthwhile, because I’m overall happy with how this turned out! Which is nice, since I’ve been feeling pretty meh about my finished projects for some time now. 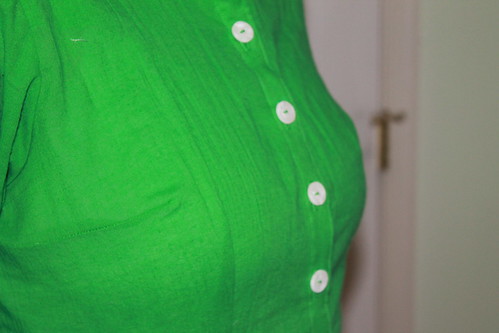 I did make a couple of changes to the fit. For one, I finally managed a successful FBA! The bust darts will need a little adjusting, because as you can see here, they’re sitting too high. But I’m going to hold off on making that alteration to the pattern until I’m done nursing and can see where they end up when wearing a bra with actual support. (The underwires on my third and final nursing bra fell out about a week ago, so I have literally no options for a decent one now. Nursing bras are a special kind of lingerie hell.) I added a bit of length to the sleeves as usual, and made the bottom the length of the largest size. It’s a change I’m definitely keeping, and I’m looking forward to seeing how it looks with pants that actually fit!

The cream buttons aren’t ideal, but I couldn’t find anything at Joann’s that was a match for the green. So I did the best I could with the options that I had. It’s so nice to have something in such a happy color for the spring! 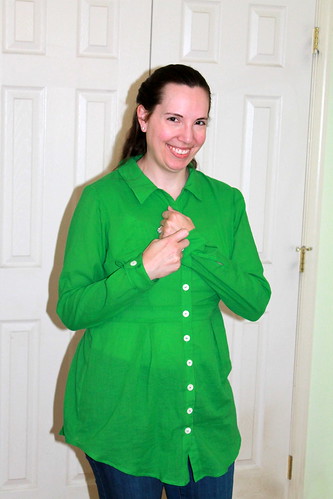 I’ll admit that there is a part of me that can’t help wondering if this just makes me look huge. The bright white cami underneath doesn’t help that, I’m sure, but I had limited options that are actually wearable right now for me. I’m having a little trouble reconciling myself with my new, bigger size, even though I’d decided long ago to wait to actively try to lose the extra weight until I’m done nursing. Extra calories and all. But at least my older clothes are starting to somewhat fit again, even if they’re leaving me with obvious muffin tops that I didn’t have before. And I do like the style of this shirt very much! I’m thinking a flannel version for this winter would be lovely, though I’m wondering if not plaid might be the best way to go. All of that matching would be a pain with the pleats and waistband! But would a more solid or non-plaid print flannel just look weird? I don’t know.

On a slightly related note, to go back to those nursing bras, I did use some birthday money to buy the basic bra fitting/construction class on Craftsy. I still need to get a supply kit, which has to wait until I can figure out my post-nursing underwire size, but that will be an interesting project for the summer!

Wow, I didn’t intend to just skip from one monthly summary to the next. But this has been a month where I just didn’t finish anything large enough for individual blog posts. I have a couple of other things in progress, but they’ve been going rather slowly. (Fitting for this blog name, I guess.)

So without further ado, here’s what I did manage to get done. Mostly via instagram pics. 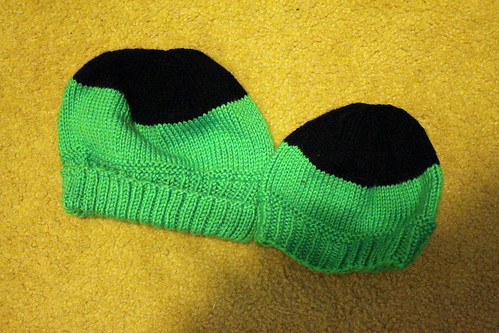 This was actually a pretty good month for knitting. I finished my second hat of the year, this time for Hobbit. And this was actually me planning ahead pretty decently! The hat size for him was 9-24 months, so this will be put aside for next winter. (He just turned 9 months this month, and is currently in a stage where all hats get violently ripped off his head within seconds anyway, so there was really no point in trying to finish it for this winter.) So now he and Doug have matching hats.

The pattern is Le Dane, which is free on Ravelry. Doug picked the colors, and I knitted them out of a soft acrylic. I added extra length to the ribbing on Doug’s at his request, because he wants to make sure he can cover his ears. I knitted Hobbit’s as is, since there’s no guarantee he’ll even leave it on!

Once I finished that, my intent was to do a second gauge swatch for my cardigan. But then I got distracted by pretty variegated yarn at Joann’s, bought two skeins, and immediately started knitting! This is the Garland Cowl, also free on Ravelry, knitted from Lion Brand Landscapes in the Apple Orchard colorway. (I’ve woven in the ends since this picture, but I haven’t tried blocking it yet.) It’s acrylic, so working with it was no problem for me, and I really enjoyed watching the colors change as I worked! I’m trying to simplify my knit accessories, since several of my older scarves are starting to look ratty, and I think this will really pop against my mostly black peacoat! I have about 100 yards left, so I’m thinking I’m going to reknit my Whittier hat. The alpaca in it does make my head itch if I wear it for longer than about 30 minutes, sadly, but I did enjoy the pattern, and it took me less than 100 yards the last time.

I did start that gauge swatch. But going down one needle size wasn’t enough, because it was ending up the exact same size! So I’m trying two sizes down, and hopefully that will be enough.

In the world of sewing, I’ve been working on a (hopefully) wearable muslin of the Deer & Doe Bruyere blouse. But I was only working on it at my mom’s sewing machine while she watched Hobbit, so it was slow going. (It’s done now, but in April. More on that later.) I cut out an Appleton dress with the intent of making it for The Monthly Stitch’s “Sew Hot Now” theme, but only got as far as modifying the pattern and cutting it out. I did finish two things, though.

The first was a second pair of the Cake Espresso leggings, from a rayon knit that’s been in the stash for some time. I did lower the waistband from the last time, and it worked much better. The only problem is that it doesn’t seem to go nearly as well with my existing cold weather wardrobe as I thought it would, so I’m having trouble finding things to wear them with! Maybe if we have a cooler day in May, I’ll find an outfit to use it in for Me-Made-May. Which I haven’t pledged yet, but I think I might on a biweekly basis or something. I don’t think I have enough clothes that fit yet to do more than that. Until then, have an instagram pic that at least shows the color. (Man, I look tired.)

I had about 3/4 yard left over, so I made a basic tank top based on McCall’s 5015. The largest size was medium, and I wanted to make sure it will fit, so I did a little FBA and added about 2 inches to the hem. It seems to have worked. I also changed the neckline and armholes to a binding rather than just turn under and hem, because we all know that never, ever works on a regular sewing machine without ripples. It did still ripple, and pressing it out without the fabric going shiny has proved difficult, despite using a press cloth and low heat. But I’m sure it’s still better than the other way would have been! (I’ve pressed it since taking this bathroom selfie, and it does look a little better now. Also, for the record, the leggings picture is closer to the color.)

So that’s my month. I used 1 3/4 yards of fabric up, and bought 1 3/4 to make a gift for a cousin who is expecting a baby this summer. (I also bought 3 yards of silk organza, but it’s for interfacing instead of stash. That’s my story and I’m sticking to it.)

Hopefully April will be a little more productive. On a personal note, we finally resorted to letting Hobbit cry it out at night as of last weekend, and it’s actually working much better than every gentler sleep method I’ve tried. So now that I’m finally catching up on some sleep myself, I’m hoping that some of this evening time can start getting used for making things instead of desperately trying to catch what little sleep I can before he wakes up.