Oh, hi! Now that we’re past Thanksgiving here in the States and the Christmas season is starting, I guess it’s time I actually write about Halloween, right?

I wanted to make a costume that would be easy for an active toddler to wear without much fussing, so an oversized hoodie seemed to be my best bet. And since Halloween in our house is basically just an excuse to make and wear the geekiest things I can, I decided (last December) to dress Hobbit as BB-8 from Star Wars: The Force Awakens. I’m mostly pleased with the results, which is good, since this hoodie took me a solid 2 1/2 months to make!

The pattern is the “Block Stripes Hoodie” from the Spring 2015 issue of Ottobre. This was my first time sewing any Ottobre, but I’d heard great things about the kids’ patterns, so I was excited to see how it turned out! The first half of this project was really just prepping the fabric, because all of that print is hand-painted. It went a lot faster after I finished that.

Overall, I was pleased with Ottobre’s directions. I had to wing a few things, because the directions assume you have a coverstitch machine, and I don’t. This was mostly problematic on the hood– I probably spent a solid 45-60 minutes carefully pinning the ribbed binding into place and sewing with the walking foot, only to have it end up rippling and flipping the raw edges to the outside. Maybe I should have shortened up the length of the ribbing, because it’s definitely much floppier than the sample picture. 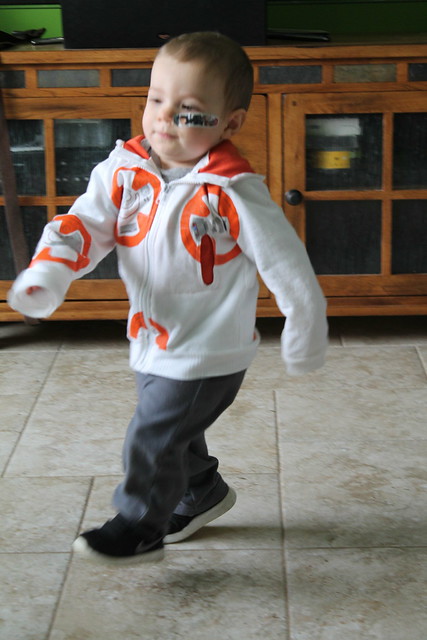 I made the 92 cm size, in hopes that he’ll be able to wear it for at least a second year. It’ll probably work, because as you can see (as well as I could capture him, because he was literally running in circles around my parents’ living room at the time), the sleeves and body are both a little long on him. But wearing it as his costume did work out well. He didn’t even fuss about having the hood up, which is really good for a kid that immediately rips hats off of his head.

My only Halloween shots were off my phone. I did a quickie Rey costume for myself, using a rolled up pair of hiking pants (plus a safety pin and belly band), the cream tee I made over the summer, my scrunchy grey boots, and some cut up cheap sweater knit. I paired his hoodie with a plain onesie and grey knit pants. 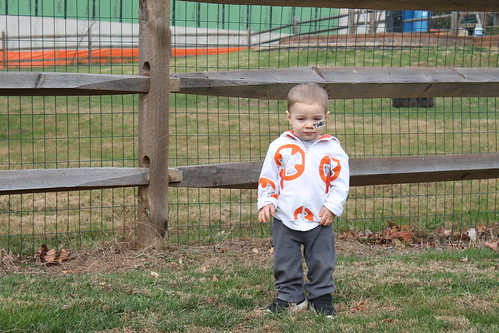 So there’s my October sewing, other than some bibs and burp cloths for a cousin. I’ve been spending most of my sewing time this month working on a Christmas shirt for Hobbit, and my own Grainline Archer shirt. And trying to figure out the best use of my sewing time for the rest of this pregnancy, considering that my sewing room will also need to be converted into a second nursery. We have found out that Hobbit is getting a little brother, but he still isn’t falling or staying asleep super consistently. So at this point, we figured that having them share a room wouldn’t be helpful, since the boys would constantly wake each other up. I am hoping that I can still make another thing or two in the midst of packing and decluttering. The current plan is to set up the machine in our bedroom so I can still try to work some time in. You know, if the boys ever nap at the same time.

On the plus side, at least I know that the handmade kid clothes that I have made so far will get some more use! If Hobbit doesn’t destroy them first…shortly after these photos were taken at my parents’ for Thanksgiving yesterday, of course he got the hoodie all muddy! But I’m pretty sure I got most of it out. I guess worst case scenario, BB-8 was a little dusty from all of the action, right?