I’ve had to be very intentional about it, but I’m still managing to find some time to sew! I spent the first month or so after my daughter was born making something for each of the kids, to give my body some time to recover and find a new normal before trying to fit something on it again. Both patterns used were from my tiny stash of Ottobre kids’ magazines.

First up, my daughter got the Wild Cat hooded tunic from the Spring 2015 issue. I made it from some scraps of a hatchi sweater knit that my mom recently used for one of her projects, since I cut this out while still pregnant and it was more readily available than digging through my own scraps! Construction was easy, with the main challenge being the invisible zipper on a bound edge. It was a good opportunity to practice finishing edges with fold over elastic, since I haven’t worked with that often. I made the smallest size for this (92 cm), EDIT TO ADD: I just noticed that I forgot to add the photo! (Thanks, sleep deprivation.) So this is actually her wearing it for her 3 month old photos. I have plans to make this again soon, as my older son declared that she needs a Little Red Riding Hood outfit to go with what I made for them. So I got some crushed red velvet and will probably make the next size up to be her first Christmas outfit. My family is aaaaall casual when it comes to Christmas gatherings. So this over a onesie and leggings will be perfect. I’m thinking I may tweak the front to avoid the zipper, though, since I’ve been struggling with how to finish those edges without making it look cheap. 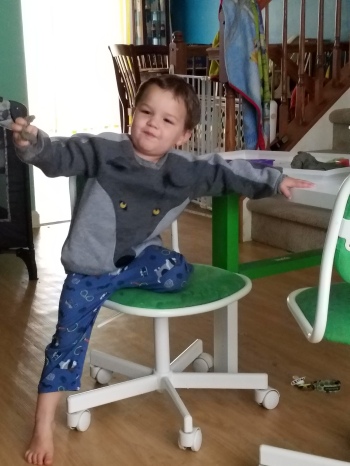 I made the boys’ shirts primarily with the younger one in mind. He has had a months-long obsession with stories involving the Big Bad Wolf, and it’s not uncommon to overhear him standing at the bathroom door while his brother is in there, yelling “little pig, little pig, let me in!” So when I saw this “Small Nice Wolf” shirt in the Autumn 2015 issue, I knew it had to happen. I had to purchase new for these, as I don’t have much gray in my stash, and knew the only shot at my oldest wearing it was to make it as soft of a fabric as possible. But I was able to use scraps for the face. 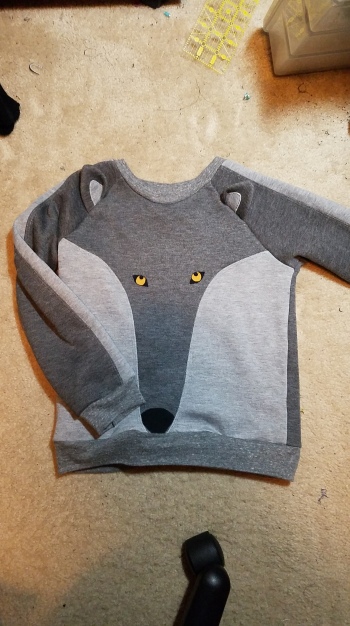 Construction wasn’t bad, particularly since I took the time to baste the curvier seams before sewing. Good thing, too, since a few pieces got mixed up between the two sizes while they were sitting on my machine, and I initially sewed the smaller side front to the larger wolf face! The one thing I’d change is to secure the 3D ears better, because they tend to flop down during wear.

I think the end result is simply adorable, and Padawan was quite excited about the results! He has worn it several times since. I’ve had a little more trouble getting Hobbit to wear it, despite him asking me several times while I was recovering from having his sister if I’d started making his shirt yet. He has worn it a few times, and gets excited when he gets compliments on it, but getting him to put it on initially can be a struggle. He does like to have things a certain way, and he did admit to me today that it bothers him that the ears flop down when it’s being worn. So I think I’m going to have to go back and hand-tack the ears to the shoulders on both shirts. 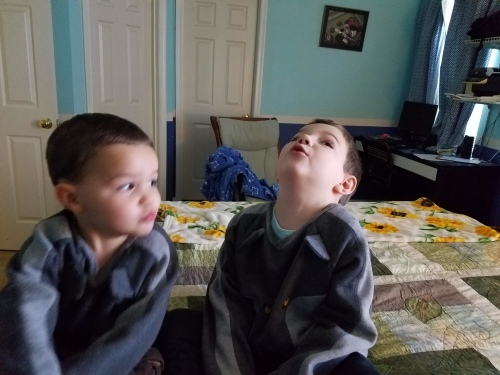 The best shot I was able to get of both of them wearing it. (I asked them to howl, and they enjoyed that part.) I have enough left that I can make them each a pair of pants, but I think I’m going to hold off on that. I’m feeling a little wary of sewing for Hobbit in particular right now, after the limited success of this shirt and what was basically a failure on the matching vests I made for them and their daddy. But I think maybe they’re warming up to my sewing for them again, as they’ve also renewed interest in the animal coats that I made for them last fall. (They still fit, since they were designed to be worn for 2 years, but it’s pretty obvious that neither of them will be able to wear them again next fall.) So we’ll see. I do have some knit panels on order for each of the kids, so I’ll need to decide whether to risk sewing for the boys again, or just make them into pillows or something.

Nothing exciting about all this gray, except that I actually managed to sit down at the machine for the first time in over a week. Getting kids to sleep in a timely fashion is hard in the longer summer daylight hours. Also, experimenting with a different approach to the pockets in the #itchtostitchfortuna .
I did not sew this new skirt. (It’s from @dharmatradingco, and #ithaspockets !) I did dye this skirt, though, finally trying the ice dyeing technique that I learned about from @elizabethmadethis . My goal was to make it look like the ocean, and I think it worked out nicely.
Between the humidity frizz and the uncooperative toddler, this is a rather derpy first look at my #ItchToStitchPrague top. But look, I sewed something! I’m not sure how I feel about the cold shoulder look on me, and I know I’m super late on that trend. But my 6 year old heartily approves of the dinosaur astronauts.
I finally managed to get some pictures of my latest @5outof4patterns #shenanigansskort . I altered it to add some side pockets, and ended up having to go back and hand-stitch around them to help them lay better. My 4 year old was on photography/styling (he really wanted me to wear this tee), and my 21 month old insisted on co-modeling. Thus the mix of regular and #keepingitreal photos. #memademomstyle
Today’s #memademay2021 : an oddly cold day for almost June = my lighter #blackwoodcardigan and #mountainviewjeans, along with a long time favorite thrifted top, for church. Now I need to change into warmer clothes and get hot tea because my husband and I have very different ideas about what an appropriate indoor temperature is.
Today’s #memademay2021: rewearing this #ponytankpattern, and RTW jeans shorts. Which I hear the kids are saying are out of style now, but if I’m old enough to get labeled “geriatric millennial” (seriously, who comes up with these things?!) then I’m old enough to not care what they think. So there. #sewover40 #sewistswearitagain