Now that it’s a third of the way through March, right? I’ll start off with another project that isn’t quite substantial enough for its own post. Having learned from my complete fail with Hobbit’s Christmas stocking, which is still cut out and completely disassembled, I decided to be more on top of things and make his Easter basket early! I got the instructions from here, and I’m not entirely sure I did it right, since mine looks very shallow in comparison with the picture. Let’s blame the fact that I’m still only averaging 90 minutes of sleep at a time before Hobbit wakes me up at night, ok? But it works. The outer light blue was from my stash, leftover from an apron that I made as a gift for a friend’s bridal shower. The stripey inside was from my mom’s stash, since she quite happily lets me bust her stash when I don’t have the right quilt cotton on hand. I tried to make it not babyish, so it can grow with him and be reused every year.

And here it is with the stuff we’ve collected to give him this year, minus one thing that I just can’t seem to quite remember to bring upstairs to put in it. Babies that put everything in their mouths but aren’t quite ready for finger food are hard to stuff Easter baskets for! Hopefully subsequent years will be easier.

State of the Stash

Well, I added a lot more than I wanted to, since in-laws left unwanted fabric at my figurative doorstep again. But I’m only counting what I decided to keep, since I already gave one piece away and the other three bolts are not things I can think of any use for. So those will be heading to the thrift store soon. Also, I did end up having to purchase a piece of fabric for diaper inserts. But I did also give away a significant portion of my scraps and small yardage pieces to my sewing student– yeah, that finally started up again this month, and she’s more likely to make doll clothes than I will anytime soon. In fact, she jumped right into two of those pieces at her last lesson to do just that!

Fabric sewn: (3.25 yards for the Appleton dress, .5 for the Easter basket, for the Plantain raglan, plus scraps)
Fabric given away: (3.25 yards plus a bunch of uncounted scraps to student)

Total in: about 14.5 (3 for the diapers, about 11.5 for the two bolts that I decided to keep from the in-laws.)
Total out: about 8.75
Total in stash: about 416. Hopefully this month I will manage to use more than I bring it. Surely that has to be the last of whatever Doug’s grandmother wants to unload…right?

Once upon a time, I used to binge cut fabric for upcoming projects. Cutting out isn’t my favorite part of the process. Something about the permanence of it freaks me out a little, especially if it’s fabric I really like. So I’d cut out two or three things at a time, sew them all up, and then repeat. I don’t do that so much these days, mostly due to not having those big blocks of time. But in this case, that habit resulted in something relatively rare in my sewing world: an unfinished project. 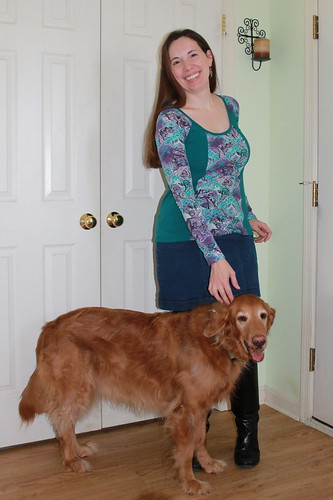 In this case, I never made it past the cutting and marking stage. I realized that I cut part of the front wrong, and set it aside to figure that one out. And then I lost interest in the pattern altogether. So this made it the perfect (and only) clothing candidate for both The Monthly Stitch’s UFO theme, and the Stashbusting Sewalong’s scrapbusting theme. After all, those pieces were mostly pretty small.

The original pattern was something Vogue. I don’t remember the number. It was a fitted enough top that I didn’t think it would fit my post-baby body in the size that was cut out, so I threw it away.  I do still love this print, though. I mean, turquoise, teal and purple? That is right in my ocean colored wheelhouse. The largest pieces were the raglan sleeves, and size-wise, they matched up pretty closely with the Deer & Doe Plantain tee. So I decided to give hacking that pattern into a raglan a go. 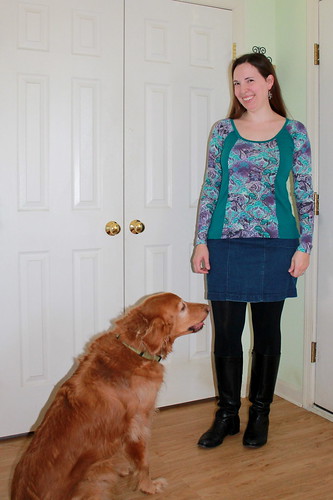 Overall, I’m happy with how it turned out! I had a smallish piece of teal rayon jersey (oddly, left over from my other Plantain tee), which I used to fill in the main part of the body. I did decide to break up the front some so I could feature the print more, and trying to accommodate that did make things a little less symmetrical than I’d probably like. But I do think this is definitely one of my most successful pattern hacks yet! 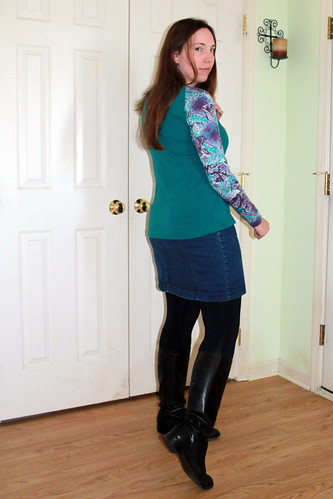 If I were to further alter this version, just for my future reference, I do think I’d change a few things: 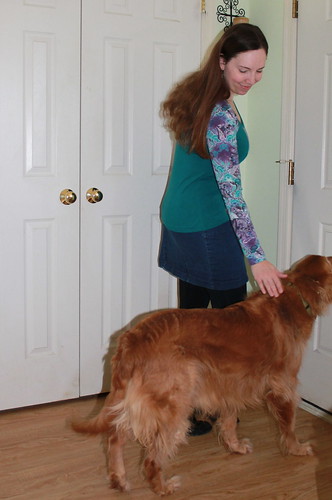 I did finish this on the 25th, just in time to wear it on my birthday. So it still counts towards participating in both themes, I think! And I do still have enough scraps left that I think I can try to squeeze a lingerie experiment out, finally. I even printed some Seamwork patterns off to do so, but then I discovered that it printed too small. So I’ll need to retrace those. Which means I’m probably going to push that off for another month or so while I try to knock out some seasonal transitional clothing… oh, look, another UFO!

And, yeah, I know these aren’t fitting well with my attempts to follow along with the Better Pictures Project. Stupid portrait mode, insisting on flash. But this was the best I could do while leaving Hobbit fenced in on the floor, with a dog who was very insistent on helping, and stuck inside to supervise them both (along with the not-pictured goldie.)