I finished a thing! It only took me about 8-9 months! The sad thing is, it took me that long to finish a sweater for Hobbit. Who is not a super-tall human. And it was with bulky yarn. Isn’t that supposed to be fast to knit? 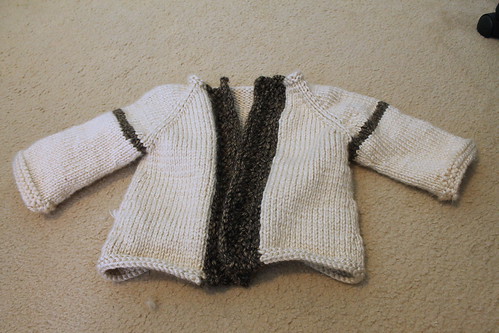 Technically, I never actually finished it. There were supposed to be pockets, but I literally ran out of yarn. I didn’t block it (it’s acrylic anyway, so it’s not like that would do much), and I was supposed to sew on some buttons, but figured that pushing buttons through those tiny little eyelet buttonholes while trying to restrain a toddler was probably a lost cause. Anyway. 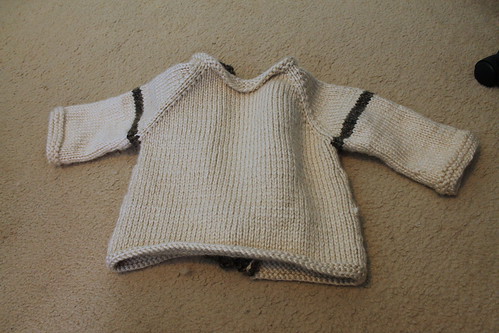 The yarn was Lion Brand Hometown USA, which I originally got from a cousin who had tried knitting and decided it was too physically hard on her hands. There were two skeins of the cream and one skein of the brown, and I figured it would be good colors for something boy. It looked like there would be enough yardage, based on what I read on Ravelry, so I went for it. And wow, was I wrong on the yardage. I actually had to go back to the store twice to buy more of the cream, and the last time I went back for more, there wasn’t any. The brown stripes on the sleeves were out of necessity, just to get enough length to finish. (And as you can see on the left side, I didn’t have quite enough of that either.) I also discovered that knitting super-bulky yarn isn’t that fun for my hands, either. I guess it’s because I knit pretty tightly, but it hurt. So I had to keep picking it up and putting it down and occasionally knitting another project instead.

The good news is, since I knit a larger size, even though it’s spring now and he probably won’t need this sweater, it’ll probably still fit him in the fall. The bad news is, I’m pretty sure he hates it. I tried to get it on him just long enough for a photoshoot, and these were the best pictures I was able to get: 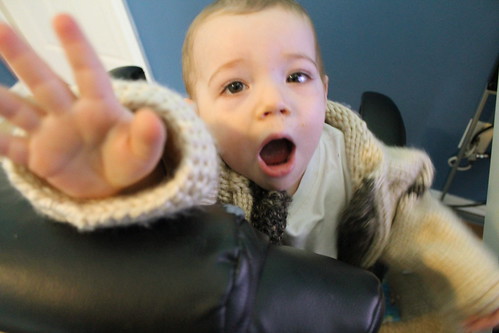 This one was while yelling “nooooooo” and reaching out so I’d pull this horrendous thing off of him. 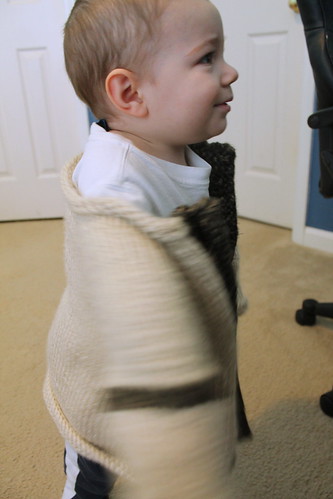 And if he looks happier here, it’s because he was managing to shrug it off himself. Sorry for the blur. I blame toddler physics– the kiddo in motion tends to stay in motion until an outside force acts on him and forces him to take a nap or something.

Oh well… I’ll try again in the fall. And if he still hates it, maybe Padawan will wear it? I hope so, because as long as this took me, it’s sad to think that it might have been a complete waste of time.

So you know how, at the end of every year, it’s pretty much traditional to share your sewing goals for the following year? And I’ve had “try making a bra” on there for several of those in a row now? Well, I finally did it.

And to be honest, I’m a little embarrassed to show the results. But in the interest of honesty and lifelong learning and all that, I’m going to do it anyway. 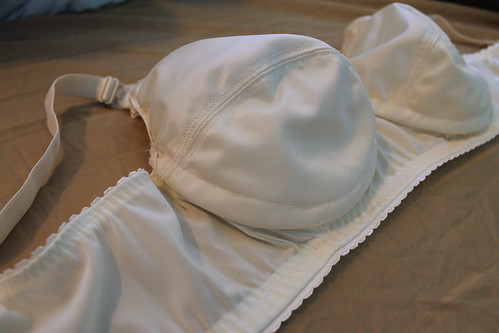 The thing is, it was never going to be anything more than frumpy to some extent, since it’s a nursing bra and therefore pure function over form. I got the pattern from Bra-Makers’ Supply, as it was the only one I could find that wasn’t a little bralette for, shall we say, the less endowed. (Especially when nursing. Ugh.) I had to completely guess at the supplies, since the sizing listed on the website was a bit confusing. So, given that I’m a complete newbie at this particular type of sewing project, I decided to just buy 3 of the large bra supply kits, along with the necessary nursing clips, and hope for the best. 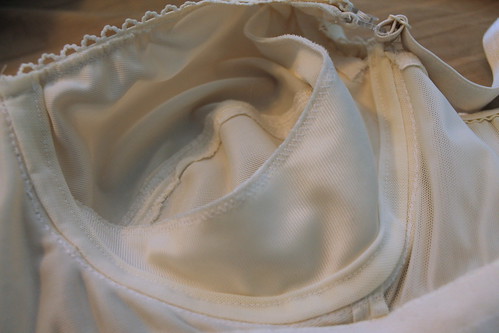 The good news is, that strategy mostly worked. (“Mostly” being the key word.) I had plenty of the band and trim elastics, and enough of the main fabrics to still have scraps left. Though not enough to line the cups. I wasn’t planning to do it to this one anyway, since I wanted to test the fit before I went to all that trouble, but I was hoping to be able to do it with the other two colors. I cut those out this afternoon, and just could not make that work. Oh well, I’ll be having to stuff these with nursing pads anyway.

This was SO fiddly to sew, moreso than any project I’ve done in some time. I guess it could be partially because of having to add that extra cradle bit to make the cups nursing friendly, and then having to wing it on finishing that seam. (It called for a strip of lightweight tricot, but the kit didn’t have it and the supply list didn’t say anything, so I had to just cut a strip of the leftover powernet and try to just make it work.) But mostly, I think it was all the elastic. That, and the seam finishing that left a lot of raw edges showing. I really feel like the whole thing looks sloppy, and if this is something I’m going to continue playing with past these nursing bras, I’m definitely going to have to clean up my technique. 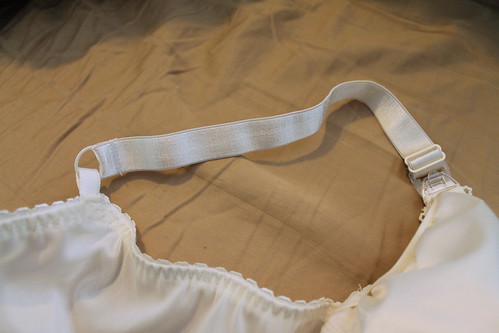 Aside from that inside cup finishing, the place where the bra kit really didn’t quite cover it was the straps. I suspected I’d be in trouble as soon as I pulled it out and saw just how short the strap elastic length was–it looked like barely enough for one, and I really wasn’t sure I’d be able to get two. I just managed to squeak it out, by adding a bit of extra length using the underwire casing that I hadn’t actually needed for this pattern. As you can see, there is virtually zero adjustability to this strap. So for the next two, I think I’ll be lengthening the casing bit.

I’m not about to put pictures of me actually wearing this thing on the internet, so as far as fit goes, I’ll say it’s probably good enough. If this was more of an everyday bra, I’d say that it really should have some more lift to it, but since this is one where my size will be changing multiple times a day and the underwires were problematic with my store-bought nursing bras, it’s fine. I’m actually wearing it right now, and it’s way more comfortable than my non-nursing bras that I’ve been forced to make work, and still more supportive than my saggy baggy older nursing bras. So in that, at least, it’s a win.

As stated, I did cut out two more today, and am hoping to get them knocked out before this baby actually arrives. It’s cutting it close, as I can only sew in short bursts before I just get too uncomfortable now. (But then, the same goes for everything else in my life right now, so…) And I’ve only got about 3 1/2 weeks before my due date, so wish me luck. Also, any of you more experienced lingerie makers have any tips for how I can get this elastic to stitch on a little nicer? Or what to do with the seam finishing to make this look better?

I’m not going to do a February wrap-up post this time, as there’s really not much to say. I did, however, recently finish a pair of nursing camisoles, with a third in the works. (Which I cannot fit over the bump, so floor modeling it is.) This is the second pattern of the nine that I specifically chose to focus on this year, the Uptown Camisole from Peekaboo Pattern Shop with the nursing add-on. The black is a rayon knit that I bought several yards of to make basic tops, and the charcoal is a long-stashed remnant left over from binding the edges of a Butterick knit dress that I made, oh, 8 or so years ago. It’s nice to have finally mostly used that up.

Overall, the construction of this one was very straightforward, so the biggest challenge for me was using it as a way to further acquaint myself with the coverstitch machine. I did make a rather important discovery while experimenting with using it to sew on the binding, rather than turning it under 1/4″ and topstitching, which I’ve always found rather fiddly on knits.

The first attempt was a complete disaster, which resulted in my having to rip the (thankfully shorter) neckline binding piece off of both camisoles and recutting it. Mostly because, as you can see here, I ripped it full of holes. I guess that’s what I get for black thread on black fabric while sewing in a room with zero natural light at night, right? *eyeroll* I did still have to do the fold under/topstitch on one of the two after this, because I serged the new binding onto the shirt and quickly learned that it’s just too thick for my coverstitch to go through and still function well. I had much better luck with the second one, where I used the stretch stitch on my regular sewing machine to attach the binding before sewing it down.

I was also able to use the coverstitch for the hems (obviously), the elastic that holds the lower portion of the front in place, and the straps. I still have a bit of a learning curve to go on here, since the stitching on the back didn’t quite catch in several places and I did a less-than-stellar job of lining up the needle with the raw edges for the hem, despite pressing in place and measuring from the folded edge while sewing. But that’s part of what’s enjoyable about sewing, right, that there’s always something new you can learn?

Which, frankly, I need right now, because I’ve been coming to the realization that aside from the coverstitch experiments, I’m just not excited about sewing these days. Or, more precisely, I’m not excited about what I’ve been sewing. I guess it’s to be expected, given that everything I’ve made so far this year has been strictly practical, and I’ve had a run of projects at the end of last year where I was less than excited about the results for one reason or another. That, and I’m at the point of this pregnancy where I’m sick of everything I’ve been wearing, and even have a little less to pick from since it’s been mostly colder than my last third trimester. Frankly, I just want to sew something that I don’t necessarily need, just for the fun of it, that will make me feel great when I wear it. But I’m not sure what that could look like right now, given that I have somewhere around 5-6 weeks of pregnancy left, and then the whole postpartum thing where my body just isn’t going to be settled enough to really fit anything for months. I’m hoping I can have a little more success in squeezing in some activity this time, since I’ll have Hobbit to chase anyway, but still. Exercise has never been something I’ve enjoyed, so it’s hard to motivate myself to do it. I also still have a few necessities that need to be taken care of, mostly hemming the nursery curtains and some badly needed nursing bras.

Have you ever been in this kind of sewing slump? Any suggestions for a fun project that might help, given my constraints? Or should I just take a break for some knitting or something?