Wow, how has it already been a month since Hobbit was born? It’s been both rewarding and challenging. On the one hand, aside from some occasional crankiness, I’m surprised at how well I’ve been able to function while averaging 4-5 hours of often-interrupted sleep every night. And Hobbit does nap well…the challenge is more that it’s mostly while he’s being held, and it was just last week that I managed to successfully get him to take some naps while I wasn’t holding him and could actually get some stuff done–namely, making the project that is the subject of this post! (Also, he eats SO much. Hobbit was a very appropriate nickname!)

(And thanks for all of the kind comments! We think he’s pretty adorable, but we may be a little biased.)

The other challenge has been getting dressed. I knew that my figure wasn’t going to immediately go back to what it was pre-pregnancy, but I was honestly surprised at how very, very few of my clothes actually do fit right now! Including some things that I thought would fit decently enough, like my Tiramisu dresses. It’s been very strange for me, since I was fortunate enough to have a pretty steady weight/measurements for most of my adult life, and now all of my shirts are extra-tight and I literally only have about 5 things that I can get over my hips, all elastic-waist. Needless to say, I’m having a bit of a wardrobe crisis. (I’m especially a little freaked out at the thought of cooler weather hitting and having literally no pants or jeans.) So as soon as I could find some spare time without a napping baby on my lap, I made a thing! 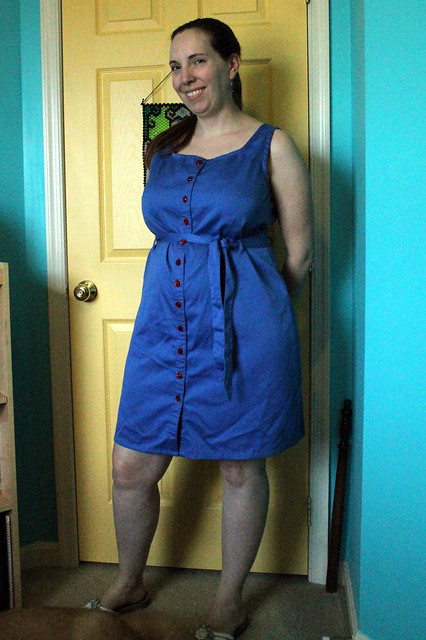 This is the Adelaide dress from Seamwork magazine, chosen both for its supposedly fast sewing time and for how forgiving it looked like it would be for my post-partum figure. That, and it looked very nursing-friendly, which is going to have to be the theme of everything I make for my upper half for awhile, I think.  I wasn’t 100% sure about the fit, since I was never completely satisfied with the Sorbetto on me, so I opted for the wearable muslin route. The fabric is a mystery woven, probably a poly-cotton blend, that was given to me for free when someone else destashed it to my mom–when this happens, she passes on whatever isn’t good for quilts to me.

While I like the color well enough, I thought I’d get bored with a solid dress. Also, I don’t have the right kind of set-in snaps on hand. So in the interest of stashbusting, I decided to swap those out for these sparkly red buttons that I originally got with a Beignet skirt in mind, before deciding that a red skirt wasn’t something that my closet needed after all and giving away the fabric in a swap. I kept the buttons, though, because sparkly, so I’m glad I finally found something to do with them! To tie those in better, I topstitched the placket, neckline and armholes in red. But I stuck with the blue for the belt and belt loops, because I don’t want to draw that much attention to my waist while I’m (hopefully) losing the extra weight. 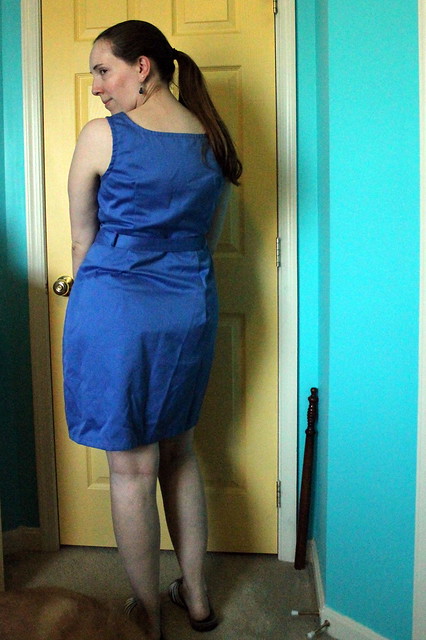 I’ll be honest–I don’t love this dress. It does serve its intended purpose, and it did knock an entire piece of yardage out of my stash–2 3/5 yards, for the record. I guess I just don’t feel like it’s entirely me. I’m not sure how much of that feeling is a commentary on the solids, or that my body is a stranger that I’m having to get to know all over again.  It might be worth giving the pattern another shot sometime, because I do feel that it’s more of a fabric issue than a stylistic one. I wonder if I’d feel better about it if it was in a print, or a fabric that draped a little better so I wouldn’t have that bit of gaping in the neckline. Or maybe just a different shade of blue?

But at this point, I’m also feeling like this beggar can’t be too choosy. And there are plusses to the utilitarian stashbusting–I don’t really have to iron this one after washing, and I don’t particularly care if he spits up on it.

I do have a couple of other projects in mind that will hopefully carry me through the warmer portion of the fall. And once I get cleared to be more active again, hopefully in 2 weeks, I figure I can start taking Hobbit for walks. Maybe, if all goes well, I’ll at least be able to fit into my collection of Thurlow pants again by the time it gets cold. After all, they worked until the end of my first trimester, where all of my other pants failed, so a girl can hope. Right?

Have you ever had to rebuild your wardrobe almost from scratch? How did you deal with it? Or, for those of you who have had kids, how long did you hold on to your old clothes (especially me-mades) to see if they would fit again or not?

Believe it or not, I can actually do a small June round-up. Although I haven’t had a chance to take pictures yet, for the most part.

So this month, I…

Oh yeah…and I finished this project.

He was born on June 22 (a week and a day past his due date), 20 3/4″ long and 8 pounds 10 ounces. He’s 10 days old now, and though it’s been pretty exhausting, it’s been fun getting to know this little guy, too. He’s usually pretty happy, except when he has to get a bath or I take too long in getting ready to feed him.

Of course, when I do feed him, then he looks more like this:

Speaking of feeding, he’s ready for that again. Hobbit was a very accurate nickname.
Back later…