The latest two sewing projects–both things for the baby–were ideas that I found on Pinterest, and they (mostly) worked out. So I figured I’d just show them both at the same time. You’re getting all phone photos/previously taken Instagrams today, since the DSLR is packed with the hospital bag now. It’s also been rather dreary weather here all week, so I apologize in advance for the not-so-great lighting on the first item in particular. I just wanted to get this post done before I’m a little…distracted. Ahem. 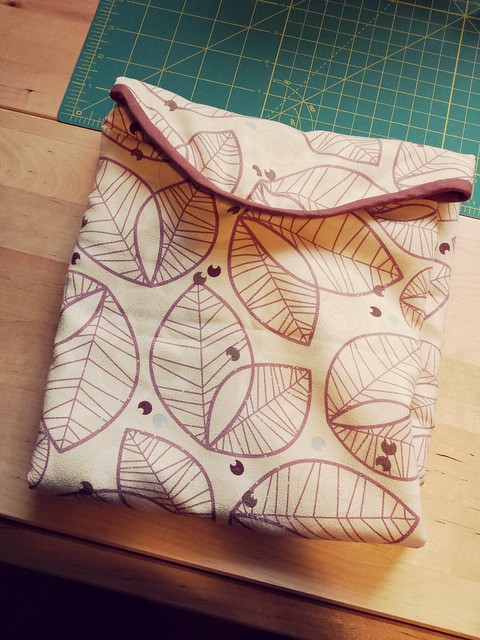 Not the most exciting make ever, but it was necessary. The co-hosts of the Small Human Being Sewalong put together a lovely Pinterest board that had all sorts of useful items on it. Among them was this baby changing mat pattern/tutorial. Which I basically just used to get the curve of the top, and then completely winged it instead, haha. I basically just wanted something I could throw into the diaper bag that I could use when I’m having to change him at other people’s houses/those public restroom changing tables, fold up to contain potential messes, and then throw in the wash. I also thought that using up a little more of the leftover fabric from the bag would be nice! Though, sadly, I didn’t manage to finish the suedecloth off.  The snap setter I bought for the diapers came in handy for coming up with a hidden closure, though. 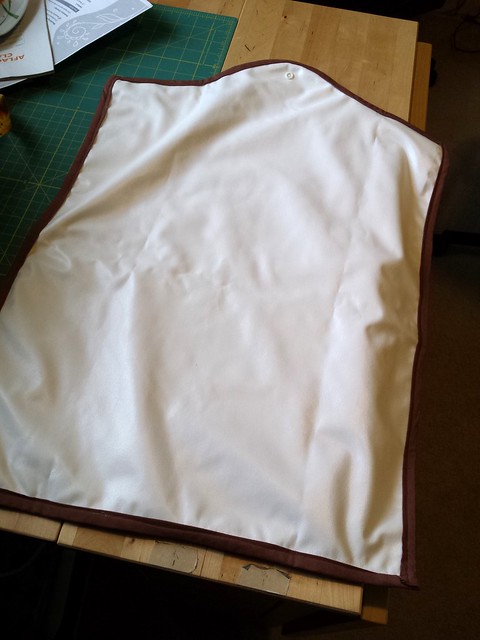 I decided to make the dimensions wider/longer than the original, and leave off the two pocket wings on the side. I didn’t think they’d be very useful with the extra bulk of cloth diapers, especially once he’s in the larger sizes. It’s not like I won’t have the bag with me at these times anyway. The inside is a double layer of polyurethane laminate, since I’d had to buy an extra piece at Joann’s to finish off the diapers and had leftovers, and I know it’s washable. Even though it makes the inside look a little more boring than vinyl-covered cotton prints would have been, which is what the original pattern called for.

I’m glad that I had to get a little distance on this one to get the full shot–the binding really isn’t all that great, because I forgot how to do the corners. But this one’s more of a function over form project, anyway. At least, that’s how I’m justifying my less-than-stellar work to myself.

I’ve been racking my brains for months, trying to figure out what to do with these adorable felt ornaments that my mom made:

She made a whole bunch of these as favors for my baby shower, which had a children’s book theme. That’s also mostly what I Doug and I decided to go with for the nursery. So we have representatives from all sorts of picture books: a Fox in Socks, a moose (for If You Give A Moose a Muffin), the owls are from a book called Who’s Hiding–which is what gave her the idea to make these in the first place, the frog and bear come from Brown Bear, Brown Bear, What Do You See, the rabbit is for the Beatrix Potter stories (after Peter Rabbit loses his coat and shoes), and the penguin is for a book called How Do Penguins Play? (And also for my mother-in-law, who is completely obsessed with all things penguin.)

As for the dogs…they’re little felt versions of our Malkin and Crosby!

Anyway, I was originally thinking of making a mobile, but was having trouble figuring out how best to make them to accommodate the ribbon loops, and not create a potential safety hazard on the crib. Then I saw this Pinterest tutorial for a homemade play gym that’s lightweight, easy to deconstruct for storage, and had felt ornaments. And I knew it would be super-cheap, because I already had everything to make it except for hula hoops! I wasn’t originally planning on having a play gym, since they’re so overpriced, but it was too cute of an idea to pass up. Hopefully the dogs won’t be all over the baby with this…

Instead of a quilt, I opted to make a solid fabric mat, because I had yards of this swirly green quilt cotton that I can’t remember what on earth I bought it for in the first place. (That, and quilts take longer.) I also had some solid green leftovers from my last round of geeky bibs, and more of those snaps. I managed to use up about half of each piece, so once again, I need to figure out what to do with leftovers. Oh well.

I had to kind of wing it on the tabs–I did manage to sew them into the hula hoop cover tubes, but then discovered that the original length would leave the ornaments hanging way too low. So I wrapped them around the tubes a couple of times and hand-tacked them down, then added the snaps in the appropriate places. Overall, I’m quite pleased with how it turned out, though!

The dogs were less impressed.

Aside from following a Pinterest tutorial for making a couple of old camisoles a little more nursing layering-friendly, hacking the Ikea curtains and the blackout curtains that we got for the nursery together, and starting work on another felt quiet book (Doctor Who this time), these two things are pretty much all I have to show for the month. Which leaves my stashbusting total at somewhere around 3 yards. Not my best month, but I didn’t buy any fabric, so that has to count for something!

Aside from that, Doug and I have been working hard on finishing up this project: 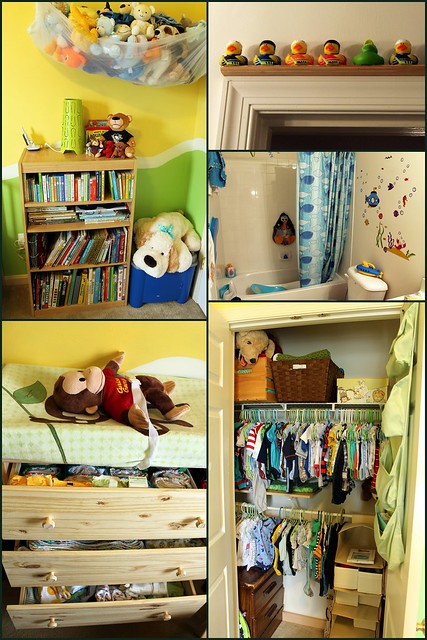 We both did the wall decals, but he pretty much took care of the extra bathroom otherwise. And he helped with organizing the closet, but I took care of dealing with the rest of the laundry and hanging things up otherwise. (And that laundry was not an easy task, because we had the baby shower on Saturday. Between a giant clothesline full of baby clothes that Doug’s mom/sister/aunt put together, outfits that other people bought us, and some extras we hadn’t had before like hooded towels and crib sheets, I seriously had a pile as big as our larger dog!)

Now that that’s all taken care of, and my music teaching work is more or less wrapped up for the next couple of months, I just need to figure out how to occupy myself for the next week and a half or so while I wait for the kiddo to make his debut. I do still have hand-sewing, but finding comfortable places to sit long enough to get anything done on that, or read, is a bit of a challenge right now! I may spend some time playing with my scrapbooks again, though, since the chair at that workstation seems to work better for me for some reason.

So I guess this is my last post for a little while, until I am physically able to/can start sneaking in some time to make things again! In the meantime, wishing you all lots of summer sewing fun!