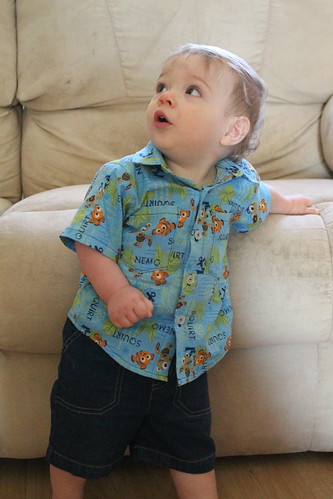 Okay, seriously…how the heck is my little boy a year old already? His birthday was last week, and so my main project this month was to make him a new little shirt to wear for that day.

The pattern is the Classic Oxford by Peekaboo Pattern Shop. I seriously wish I’d known about this site about 18 months ago, because they have several women’s knit patterns that have the option of buying a maternity and/or nursing add-on, and they’re all pretty cute in both the pregnant and non-pregnant versions. But they also have cute patterns for boys, which are notoriously hard to find. I strongly suspect I’ll be revisiting this shop for shorts and hoodies and the like. 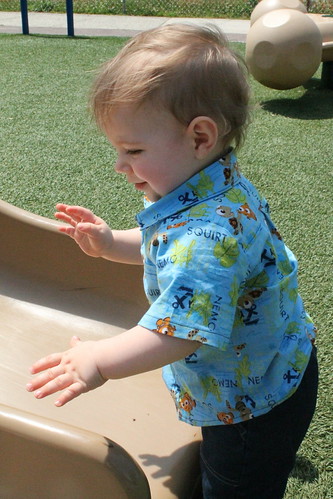 I sewed up the 18 month size, out of some fabric I’d bought on sale shortly before he was born. It was a rather timely make as far as characters go, too! Though I haven’t seen Finding Dory yet, and probably won’t make it to the theater #becausehobbit. Oh well, that’s what DVDs are for, right? As you can see, this fits him pretty well. Which is a huge relief, after the sizing issues I’ve had sewing up big 4 baby patterns. (I’m still sad that the Star Wars shirt ended up so unwearably wonky in sizing.)

I was pleased with the directions overall, too. There was one point with the yoke where I just could not make heads or tails of how the instructions wanted me to do it, but I figured out an alternative that worked just as well and still left everything clean on the inside. I particularly liked how the collar stand worked out, because she added some extra length to the pattern and you had to line it up by stitching to the edge, not anything too fiddly. 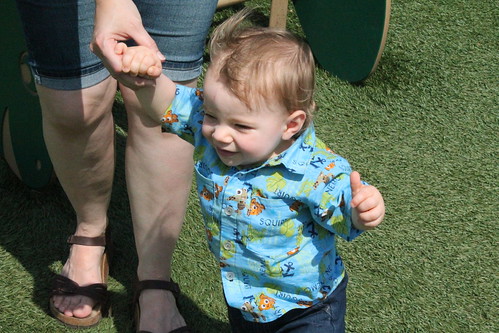 I do kind of wish that I’d had thread that matched better instead of the navy blue. And the buttons were just regular shirt buttons raided from a giant jar that my grandmother gave me when she was downsizing to move. But I guess that’s ok, because boy clothes are more suited to just regular old shirt buttons. I did do two pockets instead of one, since the print is a little more reminiscent of a Hawaiian shirt, and was very happy with how the print placement turned out for those! So hopefully he’ll get several more wears out of this before he outgrows it. But at least I can always do the unbuttoned layered shirt thing to take this one into the fall. The pattern does go up to sizing for approximately 12 years old, so I’ll definitely be getting more use out of this pattern. Especially because it also has cutting layout hints for recycling men’s shirts for it, and I’ve already saved a worn out work shirt or two of Doug’s– I find the idea of him wearing shirts made from his daddy’s shirts adorable! 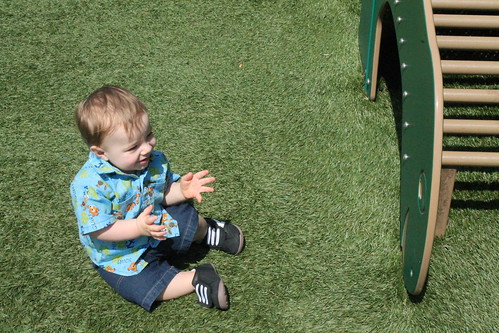 One last closing shot. Aside from this, the bulk of my sewing this month has been altering a bridesmaid dress for my sister in law. But that’s almost done now. So I’ll wrap this up so I can finally cut out something for me! 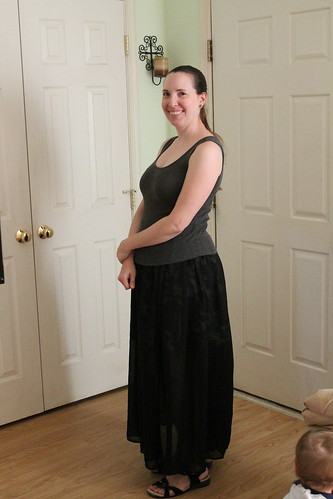 So, May in a nutshell, this skirt. I really wasn’t expecting something this relatively simple to take me almost an entire month, but such is the nature of my sewing life these days.

I say that my husband designed this, because it was basically his idea. We had a conversation somewhere during my third trimester that went something like this…

Doug: So I saw this girl at the mall today…

Pregnant me: Why were you looking at this girl?

Doug: I liked her skirt. I thought it would look good on you after you’re done being pregnant.

He went on to describe it as a long sheer skirt over a shorter skirt. It sounded simple enough to make, and it’s not often that he notices women’s fashion, so challenge accepted. I bought a couple of yards of black chiffon and some wide elastic and waited for my stomach to shrink enough to make the skirt that he liked.

Like I said, I wasn’t expecting it to take so long. On the one hand, it’s essentially two rectangles gathered into a wide elastic waistband. On the other hand, I ended up with a wider tube than the elastic would stretch to, so I ended up having to do a bunch of little pleats to gather it in. That took me a couple of tries to get the spacing right. 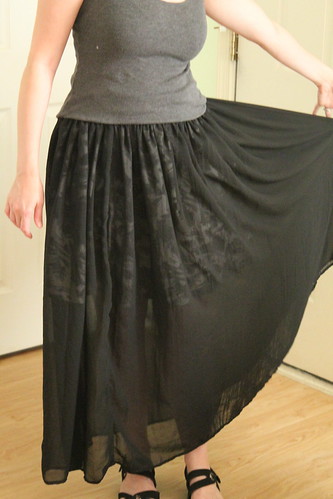 The outer layer is just black polyester chiffon from Fabric.com, purchased specifically for this purpose last summer. The inner layer is a silky polyester from Joann’s, bought years ago with a more workwear-type top in mind that I never got to. I put it shiny side in for a more subtle effect, but I really like how the print looks underneath. The background is a rather stark white, and going through the Wardrobe Architect process made me realize that ivory tones are better on me anyway, so I’m pleased to have found a use for it that better suits my palette. Now I just need to figure out a use for the leftover 2/3 yards.

I’m still trying to sort out how best to handle these wide exposed elastic waistbands. The stitches skipped and wobbled less on this one than on my refashioned plum skirt, but the waistband itself is more rippled. I guess it’s a good thing that I rarely tuck anything in. I also wish the hem was a little neater. Fighting for these little scraps of sewing time is really doing a number on my finishing skills. I just get so desperate to actually get something new into my wardrobe. Especially since a good chunk of things still don’t fit. And I don’t expect that to improve for awhile.

I feel like I should at least mention Me-Made-May, even though we’re halfway through June now and everyone’s moved on. I played along loosely via Instagram, while trying to pull out older stuff from the closet and see what still works and what doesn’t. My overall takeaway was a good news, bad news sort of situation. The good news is that I still have more workable me-mades than I thought. The bad news is that a lot of what I’m having to let go of are the majority of my basics, which is making the whole outfit thing tough. I’m especially hurting for pants and jeans, and even basic tank tops and tees. But I’m honestly not really sure what to do about it, given that I’m averaging about 1 project a month right now, I’m so dissatisfied with the styles and fit of store bought clothes these days, and (hopefully not TMI) there is talk of when to start trying for a sibling for Hobbit. It seems pointless to go through the pants fitting process just to end up with a closet full of pants that I can’t wear anymore again…any suggestions for my dilemma, mom-types?

On a happier note, this skirt busted 3 2/3 yards. It’s progress, even if just a small step.

Hopefully it won’t be weeks before I post again. Photos were the delay in sharing this one, and this month’s project is for a much cuter model!