Most of my August sewing time was dedicated to the continued restocking of my pajamas. My lightweight ones were getting particularly ratty, as they bore the brunt of both third trimesters and the most frequent nighttime nursing sessions. So I made myself two new sets, featuring some of my favorite things! 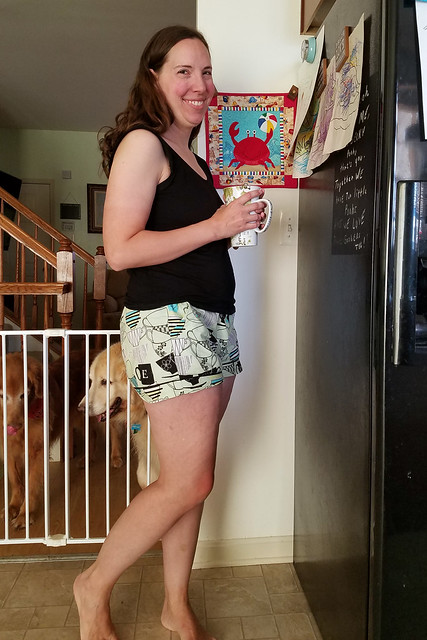 Since I’d already worked out the fitting adjustments for the Closet Case Carolyn pants back in the winter, I figured I’d keep rolling with that. Plus they have pockets. So I just copied the exact same backside adjustment when tracing out the shorts, and went for it for both pairs.

For the first set I finished, the most challenging part was forgetting to sew the back piece to the cuffs and having to unpick it. Oops. But it had also been awhile since I’d done a project with piping, so it was good to refresh my memory on how to handle that. The fabric is a quilting cotton that my mom gifted me last Christmas specifically for this purpose, with tea mugs all over. 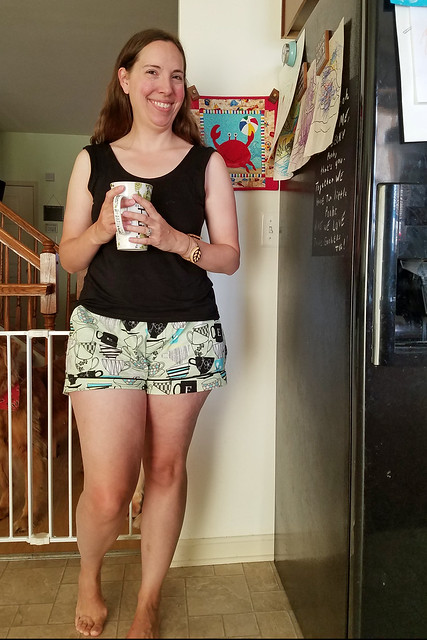 The accompanying shirt is the tank version of the Sew Liberated Stasia tee, which I’d wanted to test anyway. I was hoping that I could have this one do double duty for wearing in public, since basic color tank tops are something I’ve found myself lacking in this summer. But alas, while this (rayon?) jersey knit is super comfortable to wear, it just didn’t have the right recovery, and adding the binding to the armholes stretched them out. You can see it a little better on the left side of the picture. Pajamas it is. That being said, I’m quite happy with the results otherwise, and will have to try this again with a less drapey knit. I think it just might be the basic tank pattern I’ve been looking for! I really seriously considered adding a stencil to the tee with a cute tea-related slogan, but it reached the point where I just needed to get it done. 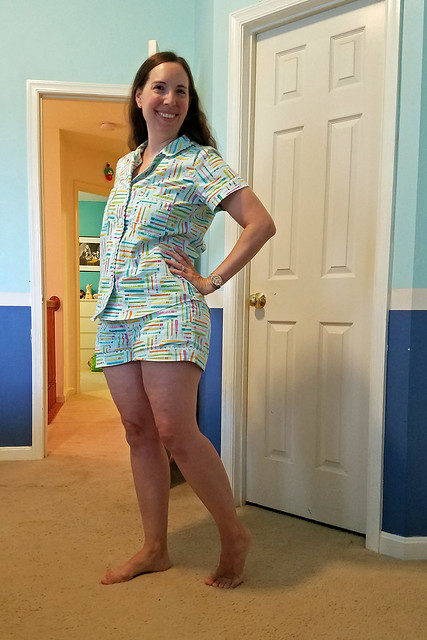 For the second set, I made the Carolyn pajama top, which was new to me. It seems to fit very well straight out of the envelope (I made a size 14). The only changes I made were doing 4 buttons instead of 5 (I misplaced one during the sewing process and couldn’t find another in the stash to match), and swapping out the trim. 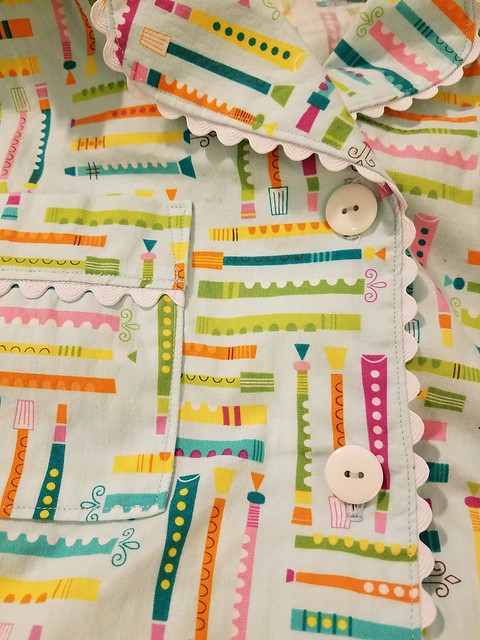 When I went to Joann’s, they were completely out of white piping, and I didn’t want to spend my precious sewing time making plain piping. So I bought rickrack instead. It might have been too cutesy little girl on another fabric, but I think that it ended up complimenting my funky flutes well! The resulting scallops echoed the keyhole shapes in several flutes on the print very nicely. 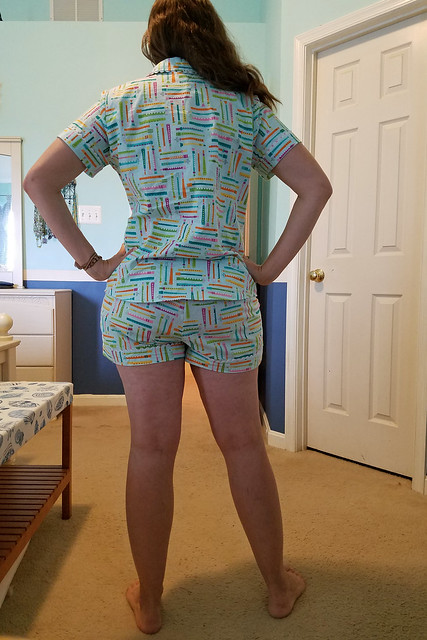 Since this was a project I made in my mom’s sewing room and I didn’t want to rethread her serger, I did take the time on this set to finish the insides very nicely– French seams and hand stitching the facing to the shoulder seams and such. It’s another quilting cotton, and I was wearing this overnight before I took the pictures, which is why it’s a little wrinkled. It’s a very comfortable shirt to wear, though I generally prefer tees for sleeping. I’m actually quite tempted to try making one in a regular shirting fabric for everyday wear, though if I ever do that, I’ll definitely have to do something about that pooling in the back. The width across the back is good, though, so I don’t think it would be an issue for when I’m actually playing the flute and not just wearing them!

I’ve started my fall sewing now, but it’s still warm enough around here that I am getting at least some use out of these pajamas this season. I don’t think I’m quite done with this pattern yet, as I could use a pair of pajama pants that are lighter weight than flannel but warmer than shorts. But since I have other things to make that need to take higher priority, I seriously doubt I’ll get to it this year!

On a more personal note, since our two golden retrievers liked to photobomb me on here fairly regularly, it’s only fair to pay tribute to the one we had to put to sleep yesterday. The photo I have further up with the tea pajamas is one of the last ones I have of Malkin (the blonde retriever). We noticed back in April that he had a tumor growing on one of his front legs, but by that point, it was too late to try and do anything about it. So we’d just been trying to make him as comfortable as we could over the last several months. He took a turn for the worse this week, though, so it was time to end his suffering. He’ll be missed greatly, though, especially by Crosby (our redhead retriever) and Doug, who had both of the dogs before he met me. Rest in peace, boy.