It’s not something I do often. The last time I made one was in 2010, so I guess I’m averaging one a decade? But my and Doug’s 5 year anniversary was earlier this month, and I wanted to do something special for him. One of my friends alerted me to a specific pattern awhile back that was absolutely perfect him. Because… 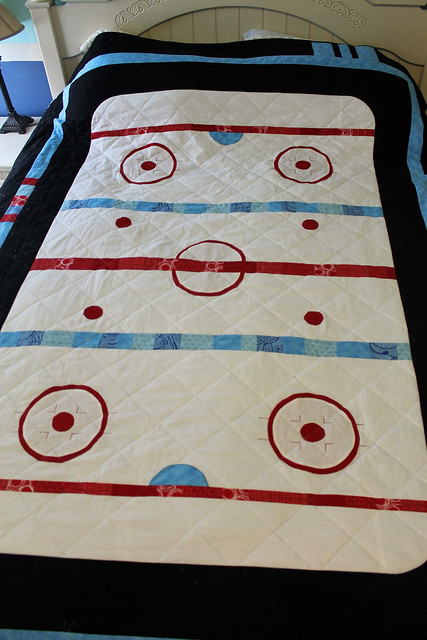 … It’s a hockey rink! This is the “Good Old Hockey Game” pattern, by Kirstie of Obsessive Crafting Disorder. My husband is a huge hockey fan. It’s the only sport he follows, he talks about it like I talk about my favorite geek topics with my friends, and his favorite team winning the Stanley Cup two years in a row probably ranks with the births of our sons in his top 5 highlights of our marriage so far. Like any serious sports fan, he sometimes gets a little stressed out during a tight game, so I thought a blanket to watch with might be a little comforting, you know?

As you may know if you’ve been following along here, my mom is a serious quilter. And I sew in our walk in closet. So the best way for me to keep it a secret was to do the entire project at her house while she watched the boys. I actually started this last July, to allow myself plenty of time. (Which was good, since I interrupted myself a lot for things like cutting out other projects and working on the coat that I still haven’t blogged from the winter. Oops.) She was a really huge help for things like helping me figure out  the best way to handle the appliques, and she even did the actual quilting for me because that was the part I was finding the most intimidating, with all of that white space. Thanks, Mom!! 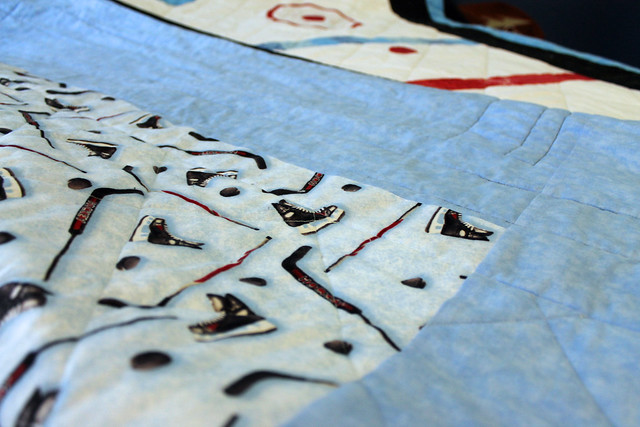 This wasn’t the best stashbuster, because as a primarily garment sewist, I don’t have a ton of quilt cotton on hand anymore. But I did manage to use one stashed piece: one yard of the rare hockey print that actually showed up at Joann’s. I bought this back during my first pregnancy with the thought that I could make a car seat cover with it, but never actually made it. It’s probably just as well, because throwing a regular blanket over the car seat in the winter works just as well, and then the baby can use it in the car too. But I digress. Thankfully, the colors worked very well with what the quilt called for anyway! 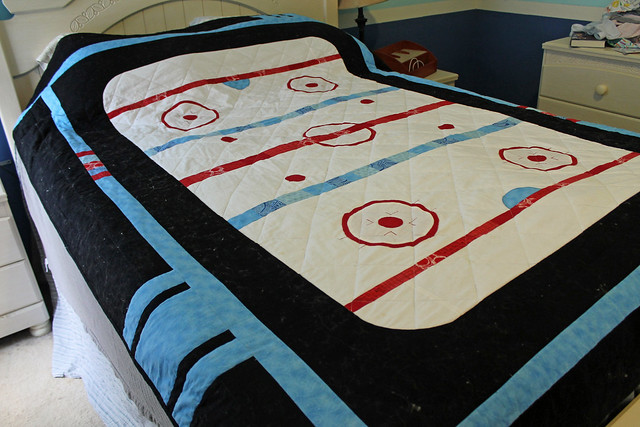 I think he liked it, because he’s insisted on having it on our bed ever since, despite the fact that it’s a twin size quilt on a queen size bed and it doesn’t quite cover anything on the sides! I’ll take that as a compliment, though.