First off, wow, thanks for all of the compliments on the jeans! Provided the metal doesn’t disastrously rip out in the wash (which I’m going to be so nervous about until I actually wash them), I suspect they’ll be a staple this fall. 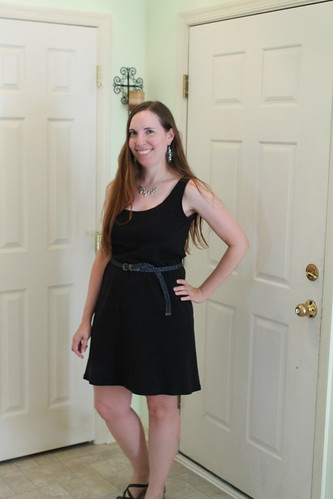 Speaking of staples, this finished project probably won’t be all that exciting to look at, but I think it does fill a little gap in my wardrobe. I took a break from DragonCon sewing to knock out this little black tank dress, so I could get it done in time for The Monthly Stitch‘s monochromatic theme month that’s currently going on. I also wanted to make sure I got this done before the end of the summer, so I’d have it for traveling–Doug and I booked a trip to Paris! I’ve never been to Europe, so you can imagine my excitement. I’ve also been told that he’s ok with me buying a little souvenir fabric, so I will happily take suggestions for places to shop there! (Especially places that are reasonably priced and have interesting prints. Despite what this dress may make you think, I’m definitely more interested in buying those!)

The pattern is McCall’s 6559, and it was a quite easy sew. Two pieces, and the edges are just turned under and stitched. I’d probably do a binding on the armholes and neckline next time so it would lay a little flatter. I’d originally thought to make this a more fitted maxi-dress. Obviously, that didn’t happen, because the fabric said no. It ended up being too narrow at the bottom for the full width of the skirt. So rather than slim the skirt and end up annoyed walking in it–I definitely have a long stride–I figured I’d just go for the shorter length. So I still have maybe a yard left over, but it shouldn’t be terribly hard to figure out something to do with a lovely black organic cotton interlock, right? 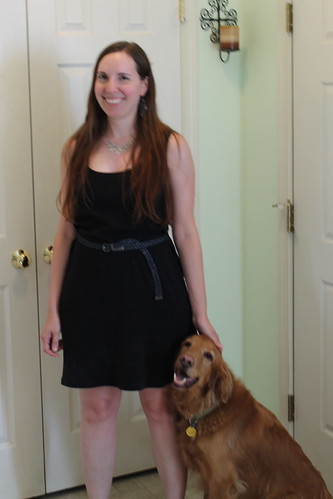 (He just can’t stand to stay out of the photos for long!) I did take it in at the armholes a little, and would normally have taken in the waist more, too. But I think I made the right choice in leaving that as is. The interlock doesn’t drape as smoothly as it would probably need to for a more fitted dress. So I figured that leaving it looser would give me some styling flexibility, plus probably be a little more comfortable when August around here is doing its usual 90+ degrees with 2000% humidity thing. This was how I wore it for its first outing, to see a local exhibit of costumes from Downton Abbey. (Yes, I took detail shots, and will happily share them in a future post if people are interested.) 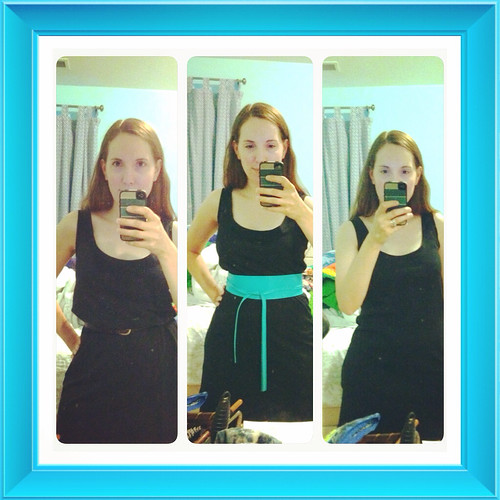 But I also did some playing around on Instagram after I finished it–the right is unbelted (and you can see a little how loose it is), and I tried it with a wider belt and then a skinnier belt and blousing it out a la the Sewaholic Saltspring dress. I do think it kind of needs some kind of belt to work on me, to be honest. 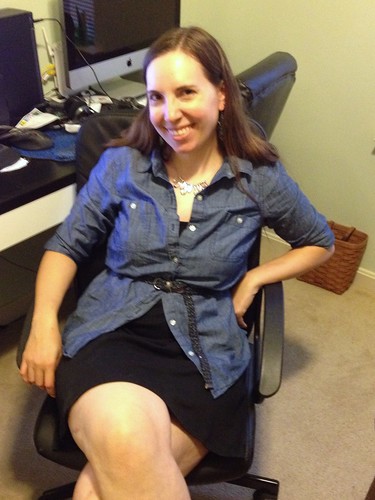 But I do like the versatility of it. This was from last night– after I got home later than expected, Doug suggested we hit the Waffle House instead of me cooking dinner. Isn’t he great? So I threw on a recently-acquired chambray shirt, threw the belt back over that, and was ready to go. I’m glad I did, because I get cold in air conditioning fast.

So, even though it wasn’t quite what I originally had in mind, I’m satisfied with how this turned out for such an easy thing to make, and I’m sure I’ll have fun this fall with layering it up to make it more functional for that season, too.

8 thoughts on “listening to the fabric”