I’ve long had an issue where if I feel like I failed at something, I have a really hard time overcoming that sense and picking it up again. There was this one time during my college years where I did a week-long music workshop out of state, and one of the people running a masterclass there was the principal flutist of the Philadelphia Orchestra. I picked a piece to play for that with the help of my flute professor, worked my tail off on it, and got ripped up one side and down the other for my performance of it. It was a solid two years before I could pick the piece up again to do even a very small performance at a nursing home with it. I used to draw and paint all the time when I was a teenager, and since I dropped out of being an art major after one horrible semester, I’ve barely been able to pick up a sketchpad–even though I’d love to get back into that sometime, the inspiration just hasn’t been there. And even though it wasn’t really a failure, ever since that time a couple of years ago where my best friend and I tried selling our wares at a craft fair, and then I set up an Etsy shop to try to get rid of the many, many extra pieces I had afterwards (which sold nothing), I haven’t even really tried to make any jewelry.

But Me-Made-May made me miss it. I honestly got more comments about my jewelry on my Instagram pictures and the Flickr group than I did about my clothes! (Not really sure what that means about my style, but oh well.) So I pulled out a couple of my bead boxes and made some stuff during the course of watching a movie with Doug one night a couple of weeks ago. So even though these may not be anything exciting, they’re important to me, because it represents finally getting past a mental block. (Also, they’re all completely from stash, which is always good!) 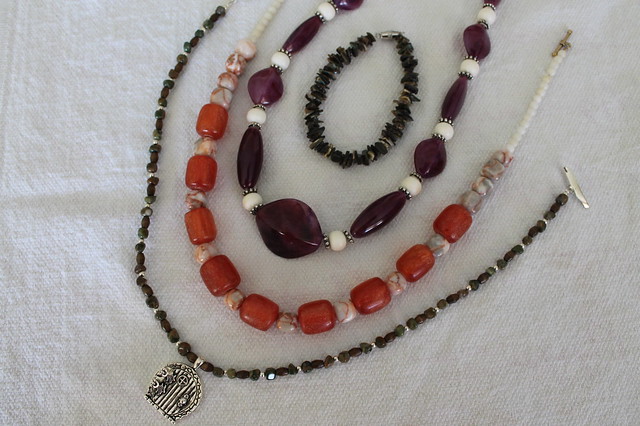 I made three necklaces and a bracelet. I haven’t had a chance to wear the bottom necklace or the bracelet yet, but I’m wearing the purple one today and I wore the coral one recently. After all of that palette work for the Wardrobe Architect project, I realized that coral and plummy purple were both things I could use more accessories in! 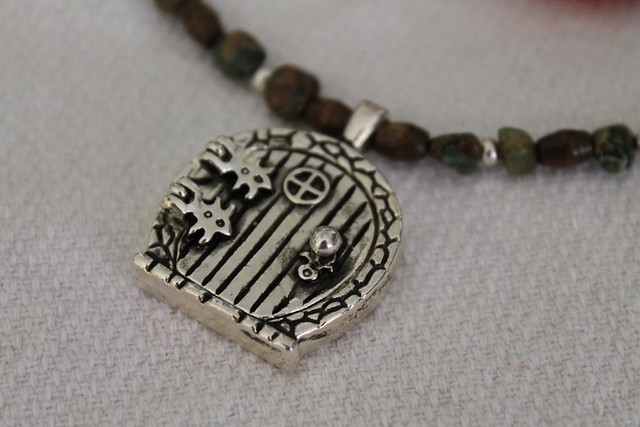 Isn’t this pendant cute? My sister-in-law gave it to me for either my birthday or Christmas last year. It’s actually a little locket, and the package said fairy door, but we all know it looks like a hobbit hole door, right? 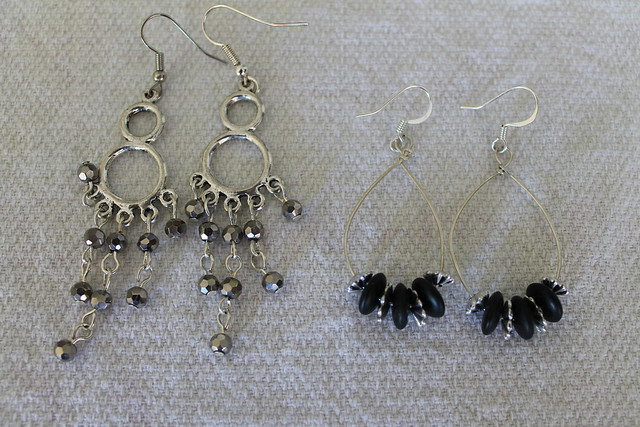 I also made a few pairs of earrings. One of my basic black earrings fell out of my ear and got lost a few months ago, so I needed something to replace it. I’m actually pretty proud of myself for bending the teardrop shapes out of the wire myself! They’re also slightly hammered, though you can’t really see the texture in this picture. The other ones were basically just making bead drops and dangling them off the pre-made 8 loops. 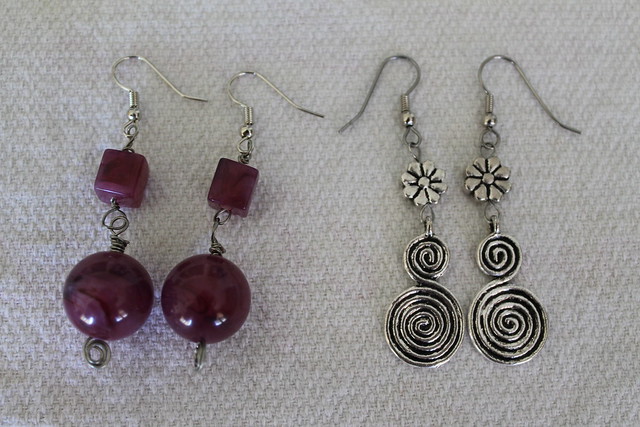 And then I also made a few more basic beaded earrings. The spiral loop 8’s were pre-made like that, but I did the wire wrapping on the purple pair myself.

2 thoughts on “back in the saddle”