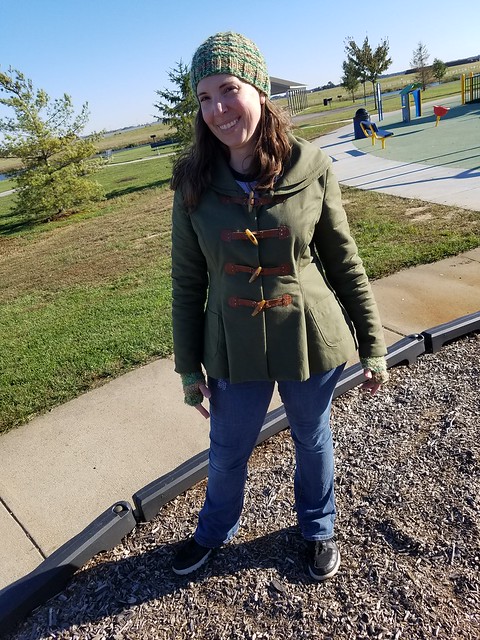 I’m finally showing the 8th project of my 2017 Make Nine list. Yeah, that’s right, I’m well over half a year late in blogging this! I actually started writing this post last winter, but didn’t have an opportunity to get pictures before yesterday. This coat had been on my list since the previous fall/winter, when I ran into a big chunk of days that were ridiculously hard to choose outerwear for. You know those days where it ranges somewhere between a low in the 40s and a high in the 60s Fahrenheit? We get those pretty frequently in the fall and spring around here. And it always ends up that my Thinsulate-lined winter coat is too hot by the afternoon, but my unlined jacket is too cold for the mornings. I have this vintage leather jacket that was my mom’s in the 70s that I used to wear on days like this, but alas, it’s too snug now. Plus something I can wash more easily is helpful these days, with my messy little boys. So it was time for another coat. 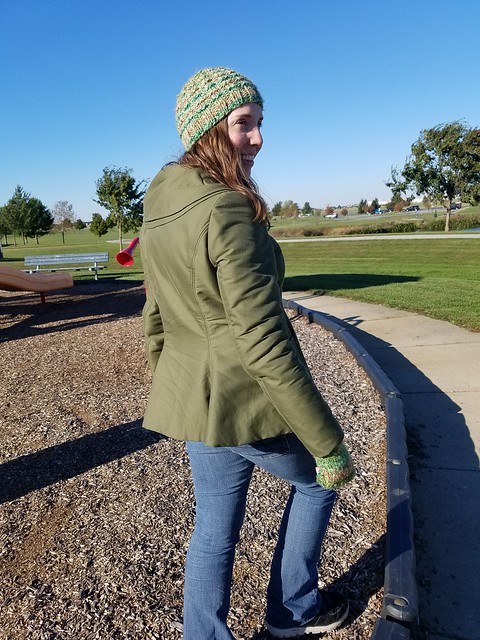 My sewing process over this last year or so has been to keep one project going at home and one at my mom’s sewing room, and this was the latter project from last September through January of this year. I was hoping to finish this by November, but obviously that didn’t happen. I used Simplicity 8262, which is a design by my favorite Project Runway winner, Leanne Marshall. I just couldn’t resist that huge double collar! I’d originally thought to do the longer version with the asymmetric hem, but decided that the shorter version would work better with the lack of drape that I’d be working with. My workaround for my skin’s lack of wool tolerance was to underline a cotton twill that I had on hand with fleece. It was quite the process; first I hand basted the fleece to the outer pieces, then I trimmed down the seams, then I catch stitched the seams down to the fleece since the thickness wasn’t pressing as flat as I wanted. I ended up topstitching down the lengths of several seams because of this as well, and I like the sort of corded effect that was the result.  (You can see it on the back princess seam here.) For the record, I traded the fleece for the best quality woven interfacing I can buy around here on the collar and facing pieces, to avoid the bulk. Then the whole thing was lined with a gold Bemberg that I’d originally purchased for a Reglisse dress lining, before the size I’d traced but not cut yet became too small.

There were a couple of things in the directions that I really wish had been written differently. It’s hard to plan ahead for changing the steps when a project takes a solid 4+ months. The flared hem was tricky to navigate, with its partially bagged lining. That’s not a technique that I’ve really had a chance to work with, but I think it would have sewed better if the hem had been completely by machine and the lining got closed up in the back seam or something. I also wish I’d sewed the toggles on before putting in the facing, both for ease of installation and to avoid the obvious mess of stitching inside. 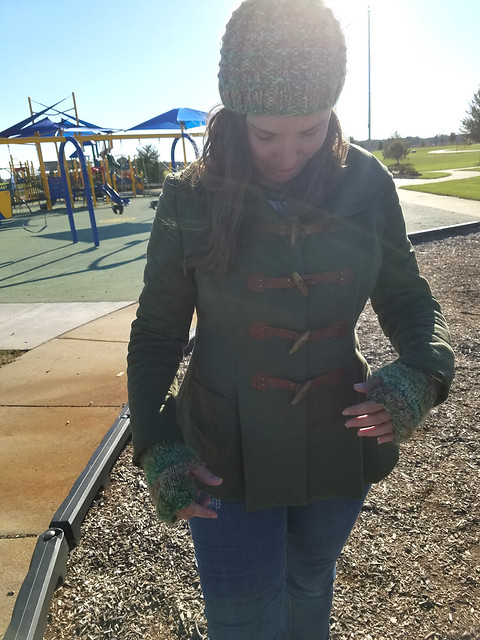 These toggles literally brought me to tears, though thankfully I like the finished look, at least from the outside. The last time I tried to sew leather was several years ago, and it did not go well for me at all. So many stitches got skipped that the resulting bag was unusable. I’d hoped that this time would go smoother, since the toggles were mostly a single layer of leather and I had access to an actual leather foot and needle this time. But nooooooo. I realized quickly that the stitching was still skipping, even when I switched to a triple stitch in hopes that it would catch more. I ended up just sewing over it to punch holes in the toggles, then having to go back and hand stitch over at least half of the edges to reinforce them. The inside looked like such a mess after this that I ended up sewing small patches of the twill inside to hide the stitching. So I didn’t get pictures of it, but it makes the facings and lining look a little odd in those spots. I do wonder if not having the extra layers of twill and interfacing inside would have helped it sew better, but I’m also wondering if maybe I just wasn’t meant to sew with leather. (So frustrating, since a project I’ve been plotting for a few years now involves stashbusting some pleather I bought and never used for a costume that didn’t work out. I’d still like to make it, so any tips? Especially from Bernina users?) 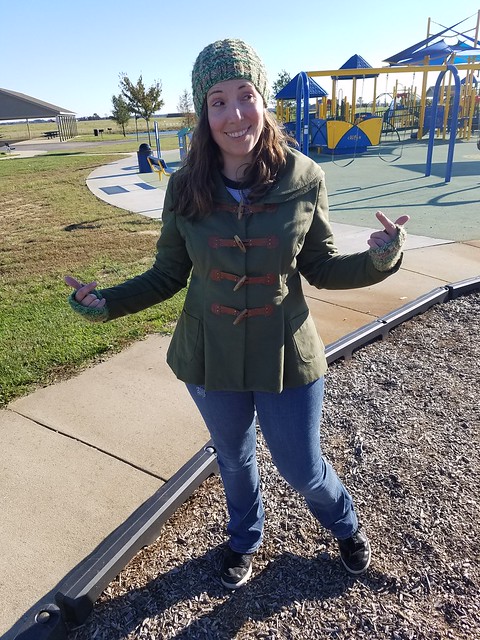 I didn’t get to wear this a whole lot last season, since our spring warmed up very quickly. Just a couple of random warmer days in February. But it did prove to be the perfect weight for those days, so I’m hoping to get some good use out of it this fall. It’s been the go-to coat pretty much this entire week, and I didn’t freeze or sweat during an extended time on the playground, so I think I nailed what I was going for! As a bonus, I already had the perfect set of hand-knitted accessories to coordinate, with this hat and handwarmer set that was one of my first successful knitting projects. Since it is taking me ages to knit anything these days– seriously, I’ve been working on the same cardigan for over two years now, and though I do have a scarf I’ve been leaving at my parents’ house, I really haven’t been working on it more than one row every few months– it’s nice to know I can pull from my accessories stash on this one. Thanks, past me.

With the exception of the toggles, I did enjoy the process of making this coat. I do like doing those really involved projects every so often, since those are the ones that often help me the most with building skills. And with all of the hand sewing that seem to accompany my coat builds (and the lack of opportunity to wear more formal dresses in my life), they’re the best way to practice my couture techniques! This was a good stashbuster as well. The twill was actually free, destashed onto me from my husband’s grandmother. The fleece was all remnants I had on hand, so if this Instagram shot actually links (I have the worst luck with IG embeds on here, the pictures always show up blank), you can see some of the weird hodgepodge of the underlining. There’s something like 3 different colors in there! And, as mentioned, the lining was from a dress that ended up not happening. So now I just need to figure out what to do with the outside fabric for that, haha. The toggles were from an Etsy shop based in the UK, and were the only thing I had to buy new other than the pattern. And though the pockets are useless for hands, they’re a good size for my phone. So overall, I’m satisfied with this project!

7 thoughts on “falling for coats”