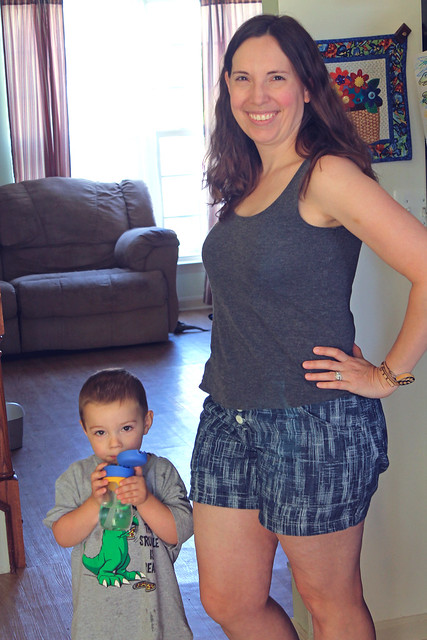 As promised! I’m very pleased at how these turned out, especially since this is the first garment I’ve made that has a fitted waistband in about 3.5 years. Fitting pants has been a scary thought for me, with all of the changes that my body has gone through. I’ve honestly been having trouble resigning myself to my increased belly curviness and waist measurement, even if it’s for the best possible reasons. (One of whom is photobombing me here.) But since I only had about two pairs of shorts with varying degrees of actually fitting, by which I mean belts are a must, this was a necessary experiment.

I've got some very strange shapes to remove from this pattern, and a baby in the carrier who is trying to jam his finger into my eye. Wish me luck on both fronts. #patternalteration #fittingpants #workinprogress #sewing

I did have to make quite a few fitting tweaks, as you know if you follow my Instagram. (See above for an example.) My original plan was to make a wearable muslin before cutting into this super fun denim, but it quickly became apparent that it needed too much work. I had to take a  small wedge out of the center back seam to avoid the gapping, which I expected. But I also had to take some serious length out of both the front and back crotch curve altogether. I know it’s supposed to be high waisted, but it was just soooo saggy. I think that I’ll add a tiny bit of length back into the front crotch the next time, though, because these are just a little uncomfortably snug when I’m sitting, particularly in the car. Not enough to be a dealbreaker for this pair, but still. I also had to let out the hips quite a bit, so it’s a good thing that allowances for that were included in the pattern. I added several inches of length to the legs as well, because short shorts aren’t my thing. 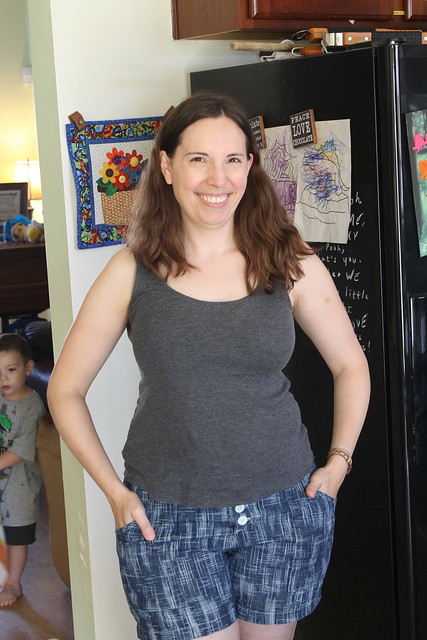 But look at the results! I’m a fan of the patch pockets on these, the size is perfect for my phone and I like the 70s vibe. I also am digging this fabric. It’s an Art Gallery denim that my mom gave me at Christmas, and just basic/neutral enough of a print that I can experiment with some print mixing. I actually have about 2/3 yard left over, so I’m debating whether I want to try to squeeze out a skirt or mix it with another denim to make a jacket. The jacket would be cooler, but coordinating the denim could be tough. We’ll see. I like the texture of the fabric and it seems to be good quality so far, so I’ll have to keep an eye out for more. As for the buttons, they’re vintage, from a collection that my grandmother gave me while downsizing her stuff to move in with my parents.

I finally finished my #landershorts , and my husband's favorite hockey team just won a playoffs game, so we're both having a good night. Now I just need to get real pictures. #sewing #handmadewardrobe 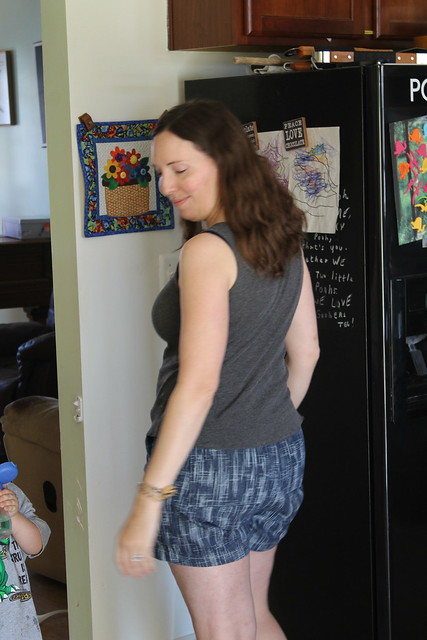 This was my first time making a True Bias pattern, since I’m probably the only user of indie patterns on earth who hasn’t tried the Hudson pants or Ogden cami yet. I was pleased with how clear everything was in the instructions, especially since this was my first time making a button fly as well. I’ll likely get the zip add on at some point, because these will definitely get made again. In fact, I already have a piece of lightweight black twill marked to make the pants, so I’ll have to see if I can knock them out for the fall. I do think that the cleaner zip look might be good for that pair, since I often wear black pants in music performance contexts.

As the only pair of shorts that fit without constantly hiking them up, these have been in heavy rotation this summer. And it’s definitely a boost to my sewing/body confidence that I can still fit a non elastic bottom piece. Which is good, since I’m seriously itching for some me-made jeans in my life again!

2 thoughts on “The long awaited Landers”