We’re about a third of the way through Me-Made May now, so I thought it would be a good place to recap what I’ve been thinking so far, share what I’ve been wearing, and show off my most recent finished project! Let’s start with the latter, shall we? 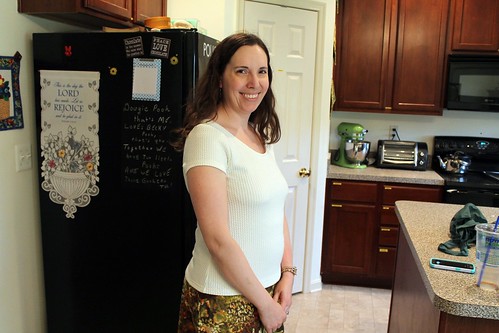 This is the Stasia tee from Sew Liberated. I had it on my Make Nine list for this year, and one of the things I really loved about this pattern as soon as it was released was that it had options for both a tee and a dress. I’m sure that the dress will get made at some point– I have an ITY that’s perfect for the shorter version, and the maxi version has been calling my name since I first laid eyes on it. But since I’m really trying to build up my TNT stash, and the top was the perfect way to test the fit, I figured I’d start there. 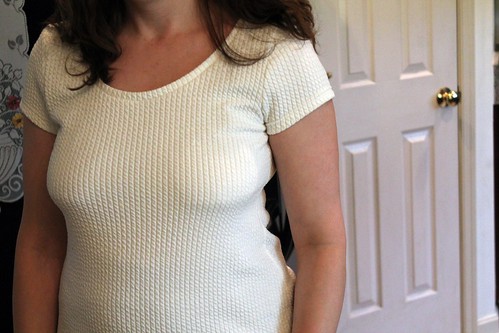 The color is pretty plain vanilla, but one thing I’ve been trying to add to my closet for awhile is a cream tee to go with some of my crazier print skirts, like the Gabriola I’m wearing it with here. This fabric was an unplanned recent purchase at Joann’s. But I loved that it has this faux cable texture, which kept it from feeling too boring in my head, and it was actually thick enough that you can’t see undergarments through it. That is so hard to find in cream. The fabric was easy to work with, coverstitched like a dream, and I was efficient enough with my layout that I have a substantial chunk left. I’m thinking I may have to hack together a hoodie out of remnants at some point, because wouldn’t this make a lovely hood? 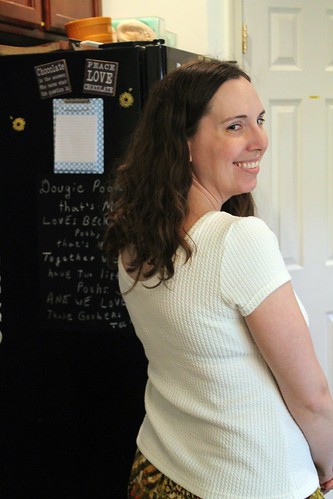 The tee pattern was really great to work with, too. I finished this in two sessions– one for cutting, and one for sewing in its entirety, so this is a great palate-cleanser sew. I made it as is out of the envelope, aside from I graded up one size between my waist and hips (yeah, I think I’m a little more pear-shaped than I used to be, thanks kids), which I think worked out well for me. The pooling isn’t quite as bad in the back as it looks here, I was kind of twisting for this stance. I like the little scoop in the back. I also think it can easily stand in with my beloved Renfrew and Plantain patterns as a basic, hackable tee without feeling redundant. Also, it can be made as a tank, and I really don’t have a good knit tank pattern, so this tee gives me high hopes for this! I would very much recommend the pattern, and don’t be surprised if you see it popping up again before long. (If nothing else, I have plans and fabric to use it to make a top for some much-needed summer pjs.)

Now, onto Me-Made May… 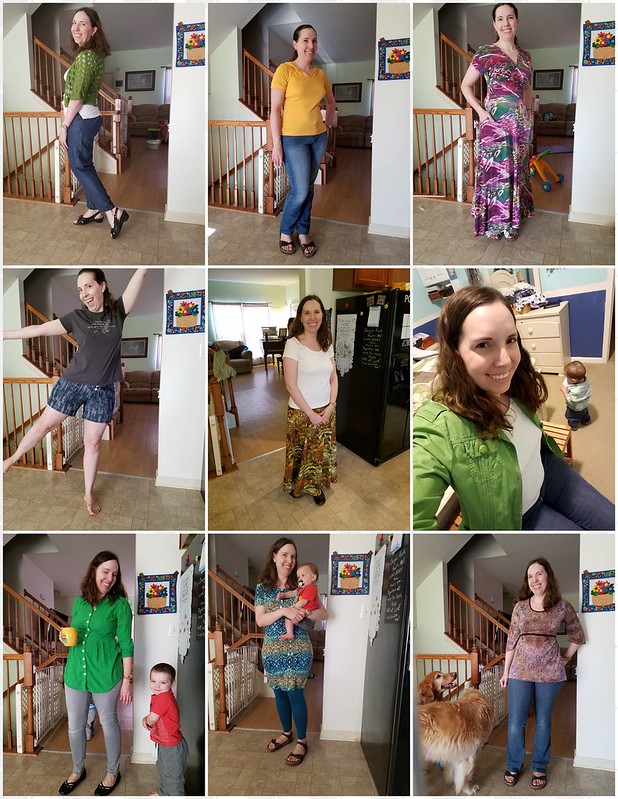 Here’s what I’ve been wearing so far, for days 1-9. (Note: I skipped last Saturday, since we were doing yardwork for a big chunk of the day, but I did have two outfits for Sunday.)

Row 2: My new True Bias Lander shorts (not yet blogged, but hopefully will be soon) and a RTW graphic tee // The Stasia tee from above with my Sewaholic Gabriola skirt, and then switched to a slightly refashioned thrifted jacket with some jeans that I recently did some invisible mending on. (Yes, I’m totally counting those as me-made at this point.)

Row 3: One of my Deer & Doe Bruyere shirts, sleeves rolled up, with RTW jeans // My Seamwork Mesa with Cake Espresso leggings // an old Simplicity 2883 hack with the me-mended jeans

And here’s what I’ve learned so far:

1. I still have a lot more handmade garments than I thought. I counted up my entire me – made wardrobe, not counting maternity clothes, outerwear coats, or things in my refashion bin, just before May. At the time, I had around 70 different pieces. (This was including long sleeves, so I wasn’t necessarily planning to wear everything over the course of the month.) It’s just that after multiple necessary closet purges over the last couple of years, a lot of what I have are at least semi-orphans.

2. The surprising hole in my wardrobe. What honestly surprised me was how hard it was to find things to wear on the more temperate days when I had to dress in what passes for work-appropriate for me! The hot days were easy, I could just bust out a maxi dress and be done with it. But I seem to be oddly lacking in short-sleeved separates. It doesn’t help that I only have four pairs of pants that fit and can be considered work-appropriate in my closet right now– my tencel denim Jalie pants, and 3 pairs of Old Navy jeans in grey, mustard, and teal. Somehow, the only top I have that goes with both the mustard and the teal is the plain cream Stasia tee that I just made. Which leads me to ask, how do I not have short sleeved stuff that goes with teal?! I mean, that’s basically a neutral for me!

3. The not surprising hole in my wardrobe. I knew going into this that casual at-home days were going to be a struggle to find something I made to wear, which is a big part of the reason why I signed up for 4 days a week. I do have a vague plan to sew some more casual tops and pants at some point, though I don’t necessarily have patterns in mind yet, nor do I feel a need to go 100% on my me-mades. I’ll be honest, the one thing in RTW that I’d probably have the most trouble letting go of is geeky graphic tees. I do love wearing my fandoms on my sleeve, so to speak. But the other thing is that the boys are getting to an age where dirt and art supplies are going to be a more daily part of life, and I do need some things that are either super-easy to get stains out of, or that I don’t care if I mess up.

4. I need to stop making 3/4 sleeved tops and start making more layering pieces. Seriously, they’re virtually useless in this climate. Mid-Atlantic seasons tend to bounce between winter straight to summer, with occasional weeks of spring and maybe about 4 weeks of autumn. I’m ok with the Bruyere, since it’s really long sleeved and I could just roll the sleeves up, and the cardigan because I can just take that off when it’s warmer, but the Simplicity top was feeling a little too warm by the afternoon.

So, to sum up, the number one thing on my sewing wishlist from this first third of the month is short-sleeved knit tops in prints that go with mustard and/or teal. I wonder if I even have anything like that in my stash!

3 thoughts on “Lessons learned from Me Made May, part 1 (and a new top)”