Once again, I’ve fallen behind on the blogging! So I figured I’d knock out two projects at once. Really four projects, because I made one of each of them for both of my boys, but still. 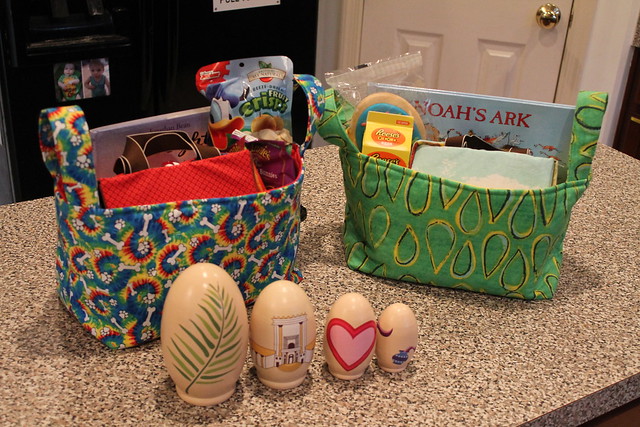 The first project was the main gift in each of their Easter baskets this year. The “Kid City” play mat pattern from Peekaboo Patterns came out near the end of last year, and I just could not resist. Here, you can see them tucked into their Easter baskets (my mom made them the baskets, I wanted some small ones that we could reuse every year), along with a book each and an age-appropriate snack. 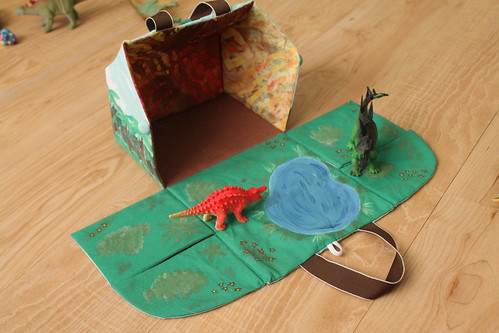 Hobbit has had an increasing obsession with all things dinosaur since he was 18 months old. So of course I had to make him a dinosaur house. The inside has a batik print fabric that I thought had a prehistoric lava filled cave look to it, and I painted the fold out part with plants and a lake so his dinosaurs can drink. 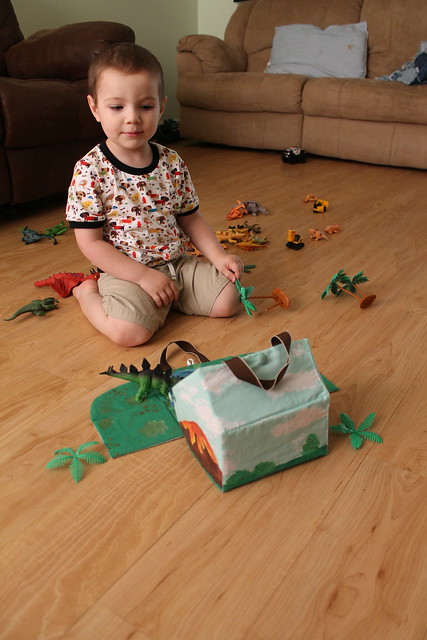 The outside is painted with shrubs and palm trees and a volcano to make a little prehistoric world. 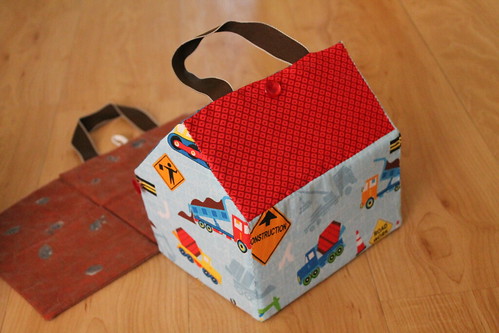 It’s a little early to tell what Padawan is into, but he seems to be gravitating towards cars and trucks. So I made him a construction site house. This is what the outside looks like… 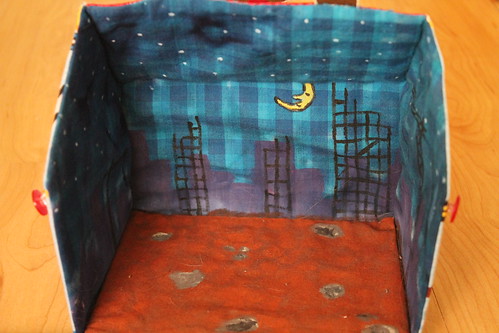 …and I modeled the inside after the artwork in “Good Night Good Night Construction Site”, which has been a favorite book.

If I was making them again, I think I’d add a little batting over the plastic canvas to have the fabric sit over it better. It was listed on the instructions as optional, but it probably shouldn’t be. I also had to hand stitch a lot more than it called for, because there were so many different colors involved that I didn’t want obvious misses on the “stitch in the ditch” directions to close up the canvas inside. Aside from that, and just the time it took to paint, it really wasn’t hard to put together, and I could see myself using this pattern again sometime, if circumstances call for it. (Future hobbit house, maybe?) This was also a really good scrapbuster! Everything except the construction truck fabric and the red fabric for the roof of that house was already in my stash. The checked fabric for the night sky was left over from the lining of a bag I made ages ago, probably back in college. The cloud fabric was left over from my flamingo wrap skirt. The batik was some random scrap from my mom, the solid green was from the baby play gym, and I forget where the brown was from, but it was there. I didn’t entirely use up any piece of fabric, but every little bit helps. 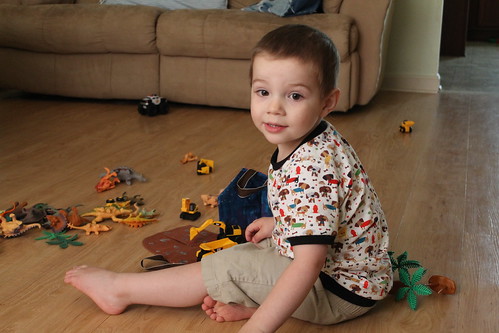 The other thing I made for them recently was their shirts!  This is the Ringer tee from Brindille & Twig, which is a free pattern! I got the dog print a couple of Christmasses ago, specifically to make boy clothes, and figured I should use it before the boys outgrew the single yard I had. I needn’t have worried, since I was easily able to get two entire shirts out, and still have about a third of a yard left! Here’s Hobbit being a very good model. It was really gratifying that when they woke up from the naptime that I finished sewing these during, and I told him I’d finished up his new doggie shirt, he insisted that he and his brother should wear them right away! I made him the size 3-4, since he’s currently wearing 3T in RTW. 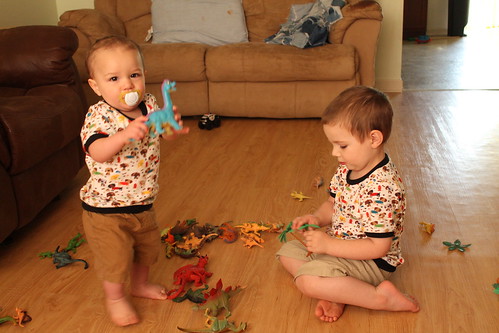 This is about the best shot I could get of my less cooperative model. He’s walking now, and will not stay still, so every single picture I took of him blurred in some way. This was one of the best ones. Anyway, Padawan is on the small side for his age, and is still pretty firmly in 9-12 month clothes, despite being close to 13 months old now. But I made him the 18 month size so he could at least wear it through the summer. It definitely has room to grow, but isn’t ridiculously huge on him.

It was a really easy pattern to sew, especially since I could construct it entirely on my serger. I did do a little bit of hand basting just to get the intersection of the side and sleeve seams to line up correctly, because it always seems to shift on my serger no matter how much I pin. That worked out well, so I think I’m just going to have to suck it up and do that on my knit projects from now on. The only issue I had was that I accidentally sewed the neck ribbing on Padawan’s shirt backwards, so that the seam is in the front, but I don’t think I’ll bother to fix it since he doesn’t seem bothered by it. The pattern goes up to size 6T, so I’ll very likely use it again. It’s a bit of a looser cut than the Ottobre pattern that I tried out, which I think they’ll probably like better. Their daddy likes his shirts oversized, and they seem to like things a little looser too. And I liked that I didn’t have to fiddle with coverstitching such a tiny sleeve opening on Padawan’s shirt in particular! I do have some of the black ribbing left over, and another yard of boy-friendly print fabric that would coordinate, so maybe I’ll tackle that one next year or something.

This probably won’t be the last of my sewing for the boys this year. I have an adorable coat pattern that I’m itching to sew up for each of them, before they get old enough to be self conscious about wearing animal coats. And Hobbit keeps asking me to make him a Tyrannosaurus Rex costume. Guess I know what I’m doing for Halloween this year…