This is really a catch-up post, since this is what I spent most of January and a little bit of early February sewing. One of my #2018makenine goals was the Carolyn pajamas by Closet Case Patterns, because my sleepwear stash was in really rough shape! Especially my winter pajamas, since everything was either falling apart or horribly stretched or just too small now. So I’ve replaced all but one set with some brand new pajama pants, plus some knit tops. 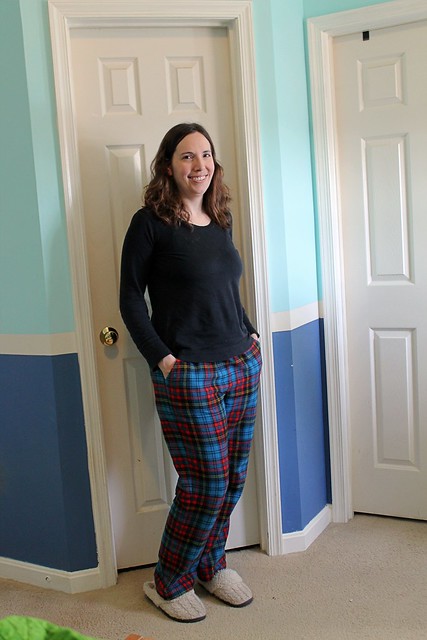 First up, the plaid pants. I actually bought this flannel to go with a Doctor Who-themed Christmas tee, not pictured here. The pants overall were pretty simple to make, especially since I just used black thread for all three pairs and knocked them out assembly-line style. The hardest part was probably just cutting this pair out, because of the plaid matching, but I think it went pretty well. The top that I’m wearing with this one is just a store-bought knit shirt that I used to wear at my garden center job, but never really pulled out for everyday wear. I don’t know why, it’s a perfectly serviceable black shirt, but it works well for free pajamas. 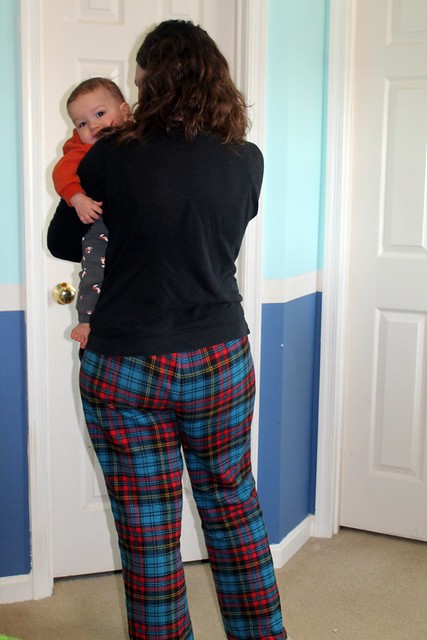 I did have to make two adjustments on here. The length was oddly long on me, so I just chopped a couple inches off of the hem. The less expected one was that I actually had to adjust for my backside. When I was tracing them out, the crotch curve seemed kind of short to me. So I took some measurements, decided that it might be best to add some length to it, and quickly looked up how to do that. I think it was a good choice, because I’m pretty sure I’d tear these up in awkward places sooner if I hadn’t. (Hi, Padawan!)

Also, can I say how nice it is to have pajama pants with pockets? Let’s be honest, life with kids means that sometimes I don’t get my pjs off before mid-morning, so it’s nice to have somewhere convenient to keep my phone. 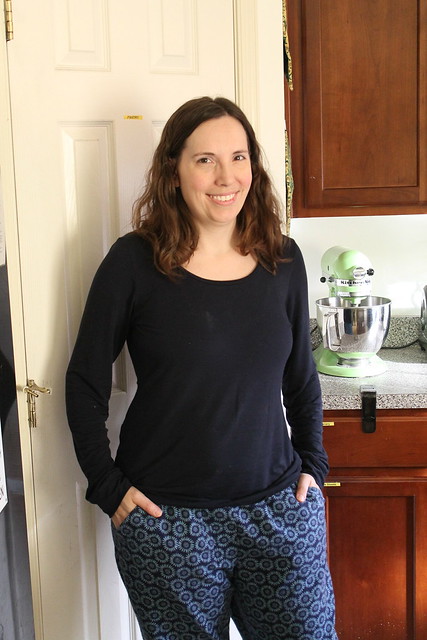 My second print is navy with some lighter blue sunflowers, and for the top, I went with the Sewaholic Renfrew. If it looks a little saggy in a few places, it’s because of the drape of the fabric. It’s one of those bamboo rayon blends that is probably all wrong for the structure of this top, but oh so comfortable to sleep in. Mostly, I wanted to do a wearable muslin so I could sort out my new sizing, after the complete disaster that was the basic black nursing tee that I made last summer. I’m happy to say that this worked out much better! I ended up going down another size, and grading in another size around the waist. So I’m feeling much more confident about my chances of success, next time I decide that I need a quick knit project and want to use one of the knits I’ve been hoarding for this pattern. Yay, I have one of my favorite TNTs back again! 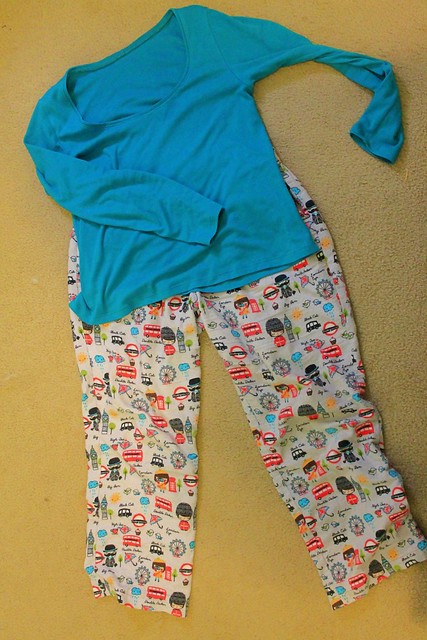 Since actually taking pictures of me wearing things is generally the thing that stands between me and more frequent blogging, I decided to let the floor model the last set. It’s this adorable cartoon London-themed print, and I paired it with a cotton-poly interlock that had been in my stash for ages. The top, of course, is the Plantain tee, since apparently that is what I make for something like every third project right now. 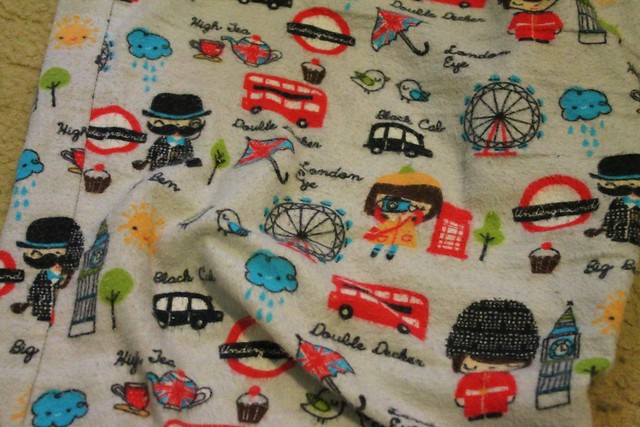 Seriously, how cute is this fabric? It has Union Jack teapots!! No TARDIS, but the Anglophile in me is still quite satisfied, and ready to curl up in these to read some Brit lit while listening to the Beatles or something. Hmmm, the next book for the book club I’m doing now is set in alternate universe England…

This definitely won’t be the last time I use this pattern. Especially since my summer pj collection also needs an update, and I got Christmas fabric to make 2 more warmer weather sets! Including one with the actual shirt from this pattern. I’ve got two summer-specific projects that I’m in the very early stages of tackling first, but watch this space.

So now I’m only one project behind on sharing finished things. I just need to get pictures first…