I’ll just say up front that this took forever. My plan was to make this shirt for the Sewcialists’ TNT theme month, to see if it would work well in a second iteration. Considering that ended over two weeks ago, obviously that didn’t happen. Between little boy sleep difficulties and rehearsals all over the place, it feels like I’ve barely been able to spend any time in my little closet!  But finally, I have a finished project to show again. 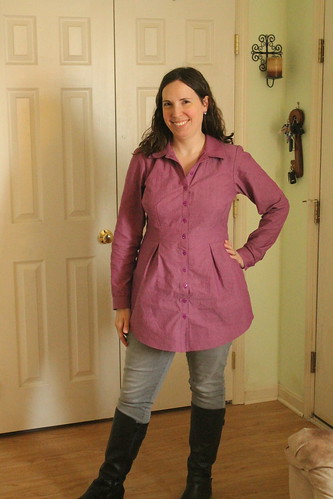 The pattern is the Deer & Doe Bruyere, and while I’m not sure it’s quite a TNT yet, I think it’s well on its way. Since my first iteration was a fabric that I have to wear a camisole under, it’s much easier with this one to see potential fit issues. The one thing I did know would need to happen was dealing with the bust darts. I lowered the horizontal bust darts about an inch (the gauze I used for the first version pressed nicely, so it works, but those darts were not designed for the post-nursing chest!) It didn’t cross my sleep-deprived mind that lowering meant I’d also have to shorten both darts. That took a couple of attempts at ripping out and restitching to point in the right place, but I think I got the horizontal ones sorted. The vertical ones still need to be about 3/4″ shorter, I think. The lengths are written down, so I just need to transfer that to my pattern. I think I’m also going to have to mark the point on the cuffs to gather to better, because there was more overlap on my green one and it made the plackets lie better. 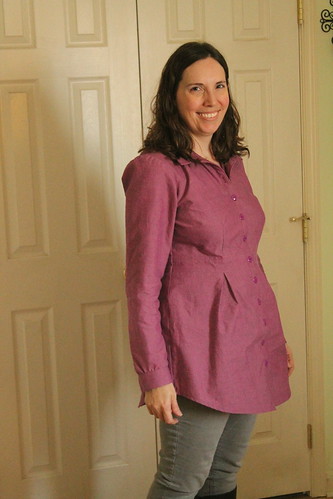 Another thing I think I’m going to have to do is lengthen the bodice just a bit. Maybe 3/4″ or so. I discovered quickly that the undergarments are important with this one, because I initially wore it with one of my old nursing bras that the underwire fell out of ages ago, and everything lay sooooo much better when I switched to one of the more supportive me-made ones. But it still feels like the waistband is sitting just a tiny bit high.

Can we talk about the fabric? It’s a raspberry colored chambray from Robert Kauffman, and it was a delight to work with. It presses so well, and held up really nicely to the seam ripper. I’ll need to see how it fares in the ironing department, but I’d not mind using this quality of chambray again at all. 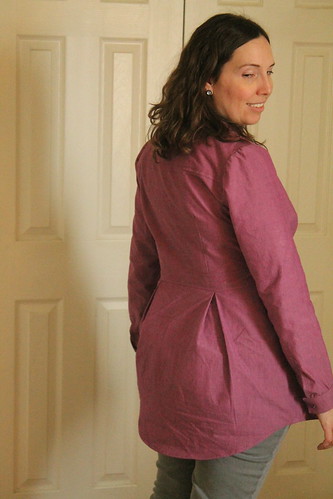 The only downside of the chambray was the occasional thickness of the layers, despite my efforts to trim and grade. There were a few buttonholes that I had to redo multiple times as a result. If I do get my hands on this fabric again, I think I’d better find my rubber mallet that I got for jeansmaking. I know it’s in the downstairs supply stash somewhere… but anyway, look how crisp the pleats are! (Please ignore my derpy face. This really was the best shot of the back of the shirt.)

I think I’ll end up having to replace the buttons at some point, because the ones that were the closest match to the color at Joann’s were in a package labeled as craft buttons, and the quality is awful for garments. Despite my efforts to allow for buttonhole space when sewing them on, I discovered that they’re really hard to work. They’re so thin that I feel like I’m going to snap them in half every time I shove them through the buttonholes. Not to mention that it literally hurts my fingers to do so. It’s really impractical for what’s supposed to easily be a nursing-friendly shirt in particular!  I’m just not sure what to replace them with, since my color matching difficulties means I’ll probably have to go with a contrast. Any suggestions? 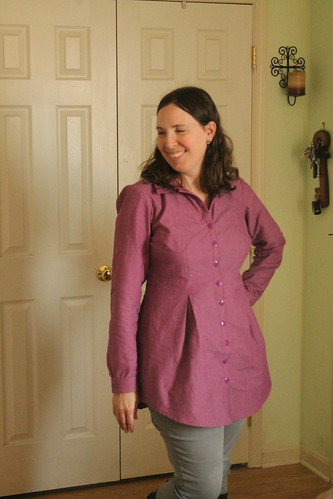 I do have ideas in my head of how I can use this pattern for at least two more garments, so I do think it will be worth getting those last few fitting tweaks worked out so I can start hacking. Especially because, in spite of the waistband feeling a little high, I feel good about how I look in this shirt. It’s been a really long time since I’ve been able to say that, with all of the weight fluctuations and lifestyle changes over the past three years. Honestly, I feel like the opacity of the fabric makes it more flattering than my green voile version, even though I do still love the color. Since there’s a fairly good chance that this will be my last finished garment of 2017, though I’m very close to finishing another, it’s good to go out on a high note.

6 thoughts on “the berry Bruyere”