Now that it’s December, I figured I’d better do a little bit of catchup on some unblogged things. After all, it’s Top 5 season! 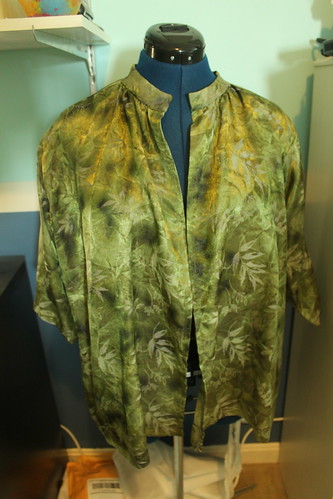 This make is actually getting close to three months old! It’s just been really hard to get pictures of it, and I’m honesty still on the fence about whether it was a success. But here goes.

I liked how my last Matcha top turned out in the end, in spite of my sizing issues. So I decided to give it another go. I traced two sizes smaller than the original top, and pulled out a lightweight silky print that had been languishing in the stash for a decade or so. Long story short, a) I really need to find some finished garment measurements for this thing, and b) bad fabric choice. It was still huge, and boxy, and just didn’t have the drape that this shirt seems to need.

I played around with cinching it in, and toyed with the idea of making a belt with the scraps that are left, but decided against that, because the silky fabric would shift out of place and into unflattering territory fast. I actually did find a wide belt elastic that’s nearly a perfect match, but haven’t successfully located a suitable buckle to make that. So since the tied fabric belt made me look like Robin Hood anyway, I decided to err on the side of art teacher chic and turn it into a kimono style jacket. I guess that means this counts as the second piece for my Refashion Redemption Project. (The only picture I actually have of me wearing this is an Instagram selfie. But it’ll have to do. Incidentally, I’m also wearing one of the nursing camisoles I was never able to do a modeled shot of because I was super pregnant at the time.) 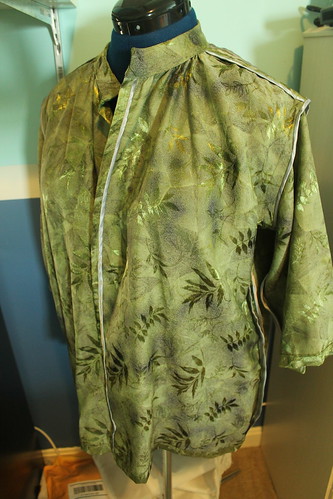 I’m really glad I’d taken the time to finish all of the insides with a bound seam allowance, since they’re visible now! I should have cut the strips wider, but live and learn. The bias strips were actually a recycle from an old bias cut, pull on skirt that I sewed ages ago. Refashion bin success!