The first couple of projects after Padawan was born were rough. Two things that I cut out while still pregnant ended up not really fitting well. Another thing didn’t have finished garment measurements and ended up too big. But since all three involved navy blue thread, I figured this would be a good time to knock out a kid’s project before Hobbit outgrew the amount of fabric, so I could take a break from fitting myself. And since he’s turning 2 today, it seemed like a good day to  share! 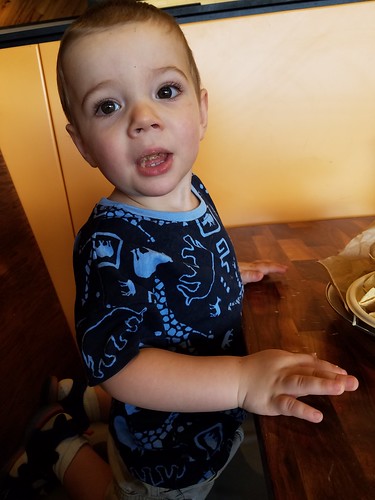 So how do you  get a clothing-averse toddler to model? Bribe him with food. (I took these photos on my phone while we were out to lunch for Father’s Day on Sunday. This is about as still as Hobbit gets while awake! I’m just glad he kept the shirt on for these pictures, honestly. He’s begging for them to come off every chance he gets these days.)

This is the “Be Cool” tee from the Spring 2015 issue of Ottobre. Obviously, without the extra time of adding the applique. I’m on the hunt for a good, basic tee pattern that I can use as the boys get older, but I’m not convinced that this one is it. 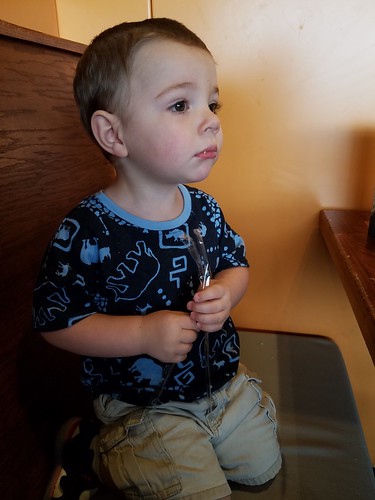 The pro: It was super-easy to make, especially now that I have a coverstitch machine. I was able to knock this one out in about 3 sewing sessions, which is really good for me these days. (My sewing sessions don’t even last 10 minutes sometimes, since I’m at the mercy of that lovely little Venn diagram of that time when both boys are napping.)

The con: Apparently I’m that stereotypical dumb American who can’t work the metric system. I had a printout that converted the centimeters to inches, specifically for their size chart. But either I measured something wrong, or my sleep-deprived brain read something wrong on the chart, because this thing ended up huge. It doesn’t look it here, because I learned from my mistake on a shirt that I haven’t managed to blog yet (ha!) and recut this down to size when I realized it was going to be ridiculously big on him. 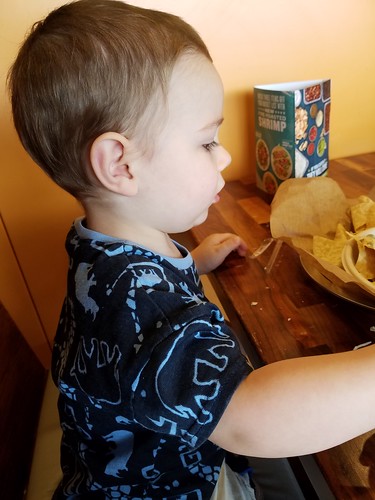 He’s currently right on that edge of outgrowing 24 month clothes/2T, so I figured I’d make this shirt about a 3T so he’ll get more use out of it before it gets passed down to his little brother. After initially cutting out a size 104 on the toddler chart– what I believed was one size up from his measurements– I compared it to a hand-me-down 3T shirt we were given and ended up cutting it down to the size 92. As you can see, the shoulders are still way too wide for him, with that shoulder seam falling a couple inches too low on his arm. 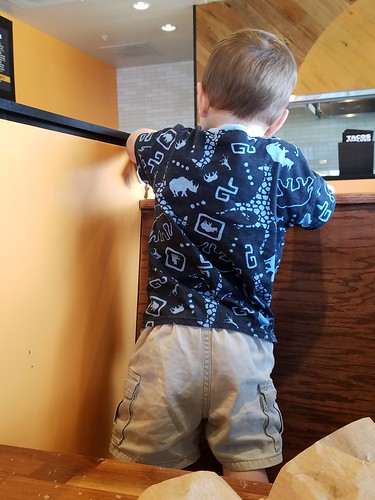 That being said, the length of the shirt overall is pretty good. He’s got his arms raised up here, and the waistband is still covered. So I don’t know if Hobbit is just skinny and tall for his age, or what?

The fabric is a knit of unknown origin, that my parents gave me for Christmas 2015 to make a shirt for him. Hobbit has been on an animal kick for awhile, and definitely recognized several of the animals on here, even if he still names them by the noise they make rather than what they’re actually called. I didn’t need to worry about him outgrowing my yardage, as it turns out, because I easily have enough of this left to cut the main parts of a raglan tee in a larger size. I thought about making something matching for Padawan, but we just have soooooo many baby clothes that I’d rather use my limited time to cover the larger sizes where we actually need things. At least, until he’s old enough to get jealous, if he even cares about getting new clothes vs. hand-me-downs.

As for the ribbing, I harvested it off of one of my tees after I realized that the navy blue ribbing I bought looks really purple next to the background of this fabric. Sadly, several of my favorite geeky tees are just too short/tight after two pregnancies this close together. So my plan is to recycle those into something useful so I can keep the graphics (eventually), and in the meantime, I got a much nicer contrast ribbing for free.

So my quest for the perfect basic boys’ tee pattern continues. I do have another one to try out, so stay tuned…

4 thoughts on “a little safari shirt”