I’m sure you remember the blog series that Colette Patterns put out a few years ago, right? I enjoyed the chance to take a really in-depth look at the things I like to wear in hopes of making the most of my handmade wardrobe, though the only place I really got to implement it was when trying to put together my maternity wardrobe. It did certainly help that I already had that base when I added a few thrift shop extras back in the fall to compensate for the overall colder weather that I’ve had this second time around, because I was able to quickly zone in on the colors that already went with the things I had. But I’ve also been thinking that it’s time to take a second look at this process, because a lot has changed since I went through it in 2014.

When I did it before, I was working more, my weight had been generally stable for a long time so I had a good idea of what actually worked on my figure, and I could focus more on form rather than just function. Now, I still need clothes that are professional enough to teach music lessons in and nice black outfits for concerts, but I’m also a mom of two very young kids. (Just haven’t quite met the second one yet.) I only had a couple of months between wrapping up nursing before and the beginning of this second pregnancy, so it’s been awhile since my body hasn’t been constantly changing. It’ll be awhile longer, given that I’ve got all the new baby weight to lose on top of the bit I hadn’t lost from Hobbit yet. And I did a massive closet purge back in the summer, but still haven’t really been able to evaluate how well the things that got left will work for me, since I haven’t been able to wear most of them for months now. 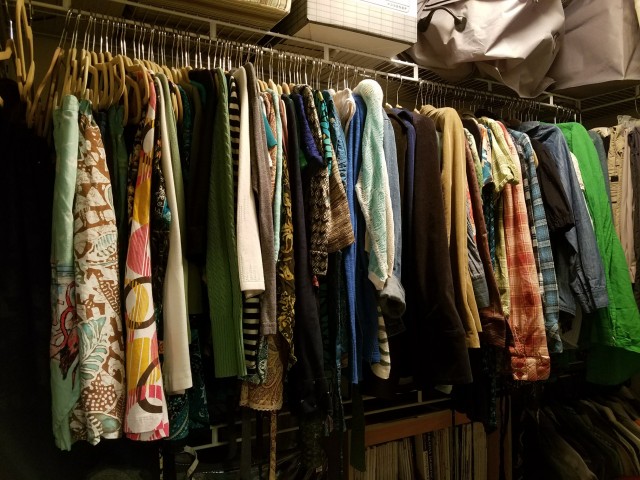 (Most of what’s left, minus the skirts and dresses that wouldn’t fit in the picture. And t-shirts and stuff.)

I don’t think I’ll need to go quite as in depth this time, because the color palette that I like, my love for prints over solids, and the general feel that I want for my wardrobe haven’t changed. But I definitely need to reevaluate the silhouettes that might work on me, and how my current lifestyle affects what I need. And I feel like this is a good time to do it, since my ability to physically sew is limited right now. (Though I did manage to finish the second nursing bra, at least. We’ll see about the third.)  If nothing else, I could use the distraction, because the end of this pregnancy is so much physically harder than I remember the last one being! More to come…

It’s been a rocky start, but here’s proof that I still know how to use this sewing machine. #waiwot #homemadehalloween
I finished up my #ItSFortuna shorts last night, with a few changes from the pants version that I made a couple of months ago. My least favorite feature of the original pants is how saggy the pockets get when I stick my phone in them, so I added some reinforcement with a self facing this time. So far, so good. I also added some extra stitching through the elastic underneath the drawstring tie, since the back stitching hasn’t been enough to keep it from twisting. And to try to reduce the gym shorts vibe, I ended up rolling the hem to the outside to make a faux cuffed look. The fabric is a soft French Terry and very comfortable, but I think that next time, I’ll need a more fun color or a print!
Recent thrift store score, minus Gandalf. I finished my personal sewing project last night (maybe I’ll take pictures today, if the kids let me). Given how it’s taken me all summer to sew three knit garments, and we’re starting up our homeschool again in a couple of weeks, I need to start Halloween costumes now if I want to have any chance of finishing in time! The boys decided they wanted to do LotR costumes this year, and I am HERE for it. So hopefully, I’ll succeed in turning these four valances and single curtain into a wizard and an Elf. #refashioning #costumesewing
Nothing exciting about all this gray, except that I actually managed to sit down at the machine for the first time in over a week. Getting kids to sleep in a timely fashion is hard in the longer summer daylight hours. Also, experimenting with a different approach to the pockets in the #itchtostitchfortuna .
I did not sew this new skirt. (It’s from @dharmatradingco, and #ithaspockets !) I did dye this skirt, though, finally trying the ice dyeing technique that I learned about from @elizabethmadethis . My goal was to make it look like the ocean, and I think it worked out nicely.
Between the humidity frizz and the uncooperative toddler, this is a rather derpy first look at my #ItchToStitchPrague top. But look, I sewed something! I’m not sure how I feel about the cold shoulder look on me, and I know I’m super late on that trend. But my 6 year old heartily approves of the dinosaur astronauts.