Since it’s time to tie up the loose ends of 2016, here’s a few unblogged projects, my stashbusting update, and some exciting updates to my sewing space!

Unblogged project #1: Hobbit’s Christmas shirt. I had just barely enough of this homespun type plaid that one of my grandma’s friends offloaded onto me, and I did have to supplement a bit with some plain black. Most of it was straightforward sewing, especially since it is a larger size of the same pattern that I used for his first birthday shirt. The one place I did have trouble was the sleeve placket. I don’t know if it was the particular method given in the instructions, or pregnancy brain, or what, but I could not make sense of how this was actually supposed to work! And I know I ended up doing it wrong– the inside of the placket is so wonky, and there is absolutely no way I would have been able to add the button mid-placket that the instructions called for, even if I hadn’t opted to go with the more casual buttonless look. I couldn’t find any pattern help for this part online, so I’m definitely going to have to do a practice run or find another method before I make the long sleeved version of this pattern again! 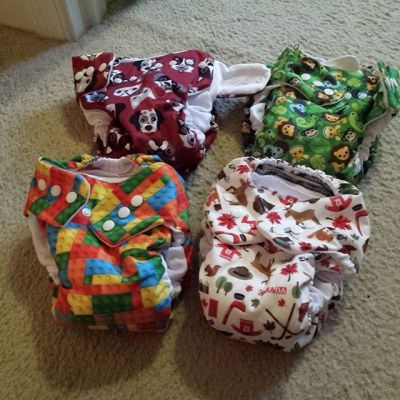 Unblogged project #2: I made another batch of diapers, using some PUL prints that I was given last Christmas for this purpose. It more or less took me literally all year to sew these, because I just worked them in between all of my other projects. But I’m hoping that this will be the largest I have to go, since Hobbit will be getting to an age where I can attempt toilet training next year. I can’t say I’m entirely done with diaper sewing, because a friend gave me some brand name adjustable size covers that she didn’t need, and I’ll need to make some inserts so I can use them as backups for either boy when I’m behind on laundry. But I’m getting close, and that’s nice. Now I just need to figure out some use for these large scraps that the oddly shaped pieces left behind!

The stash update: I started the year with around 426 yards of fabric, and ended with around 394. It’s finally going down! It looks like I used a total of close to 61 yards this year, and acquired about 30 1/2. Admittedly, about 17 yards of that was Christmas gifts this year, but I already have specific plans for most of those pieces due to the wardrobe holes that my mom knew about. She’s good like that. My stashbusting plan for this year is to donate several pieces that I just don’t think I can use, mostly pieces that other people destashed onto me that aren’t necessarily my taste. And then sew as much as the boys let me. I will have to purchase for a couple of specific projects, namely nursing bras/my coat lining/Halloween costumes, but I do want to focus on using what I have as much as I can. 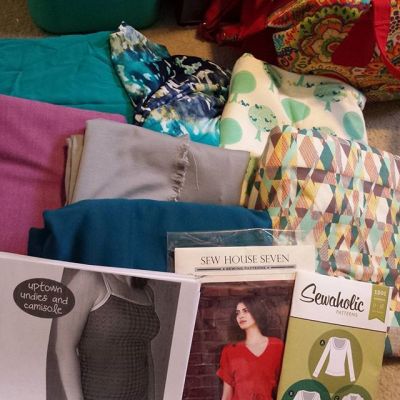 Right now, I’ve been busy going through my jewelry supplies and drastically downsizing. Then I’ll have to tackle fabric, yarn and scrapbook paper. But I’m hoping I can get the room cleared and my new space set up as quickly as I can, because I have all of these pretty new fabrics and patterns, plus new toys to play with! Doug surprised me with a coverstitch machine for Christmas (eeeeeee!), and my mom recently informed me that she’s passing on one of her extra sewing machines to me, since she has multiple of those on hand. So I’m getting a newer model Bernina! My workhorse from the late 80s-early 90s is still running fine, aside from that one incident where the electric went out in the middle of my wedding dress, but I have to admit that it’ll be nice to have an actual stretch stitch that isn’t guessing at zigzags. And, well, a light on my machine that works, since that one has been useless for probably a decade. We’re still trying to sort out how exactly to configure the new space, but the most likely option at this point is to buy a wardrobe to store our clothes in the main part of the room, and then set up my sewing machines in the walk-in closet so that we can close the door and keep Hobbit away from all of the sharp pointy things. (As well as his little brother, who will henceforth be known here as Padawan, once he’s starting to get mobile.)

2 thoughts on “Year-end wrap up”