Taking a break from the top 5s to actually show something new–I finally finished the second of the two personal projects that I started before I knew I was pregnant. The nice thing about this one is that I can still wear it! For now, at least. 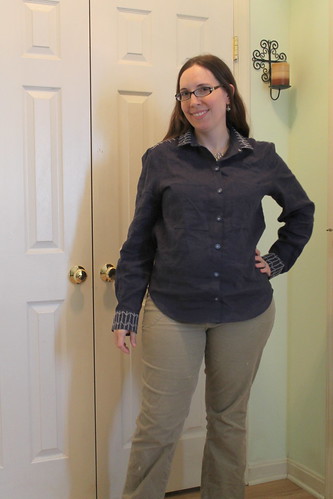 The pattern is the Grainline Archer shirt, and I’m probably the last user of indie sewing patterns on the internet to take this one on. I’ve had the pattern and fabric for awhile, but timely sewing is not my forte these days! And I’ll admit that part of what delayed it was fear of being bored. Not with the pattern itself, but the fabric was just plain ol’ navy blue. Not the most exciting.

An issue of Seamwork’s online magazine earlier this year was just the inspiration I needed to finally get this one started. There was a feature on sashiko embroidery. And since the fabric had been listed as a Japanese linen, it sounded like the perfect canvas to give it a try! So I splurged on actual sashiko thread and needles, found a design online that looked doable (plus I liked that it does kind of look like arrow fletchings, given the name of the pattern), and got to work. 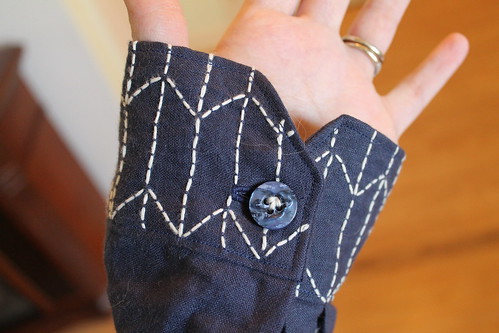 The embroidery was definitely the most time consuming part of sewing this shirt together, but I genuinely enjoyed the process. Once I got the hang of spacing the stitches, it was a great project to just chill and catch up on a show while Hobbit napped. Having the right kind of needle definitely helped! I think I would revisit this technique sometime. Either for embellishment, or I’ve seen an amazing example of visible jeans mending that uses the sashiko technique. I’d almost want to use it on brand new jeans! (You know, whenever my weight stabilizes enough that I feel like I can actually go through the jeans fitting process again.) I put it on the collar, cuffs and back yoke, and then had a little fun with trying a different design for sewing on the buttons. (Arrows, because I’m seriously geeky like that.) 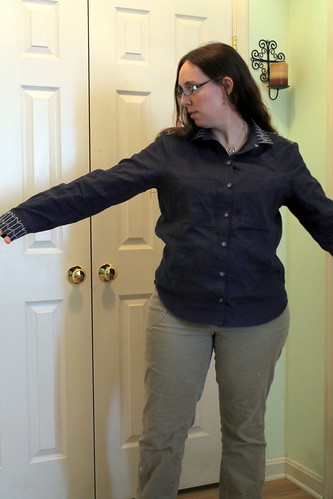 So let’s talk about the fit, shall we? I’m honestly having mixed feelings. On the one hand, yay for something new that still fits! On the other hand, I’m not entirely satisfied with the look. Probably a big part of it is that I did size up– I had enough foresight to use the bust measurement I had back when I was nursing Hobbit full time, so this fitting after the next baby should be no issue at all! But that does make it super boxy around my shoulders and arms, and not in a good way. 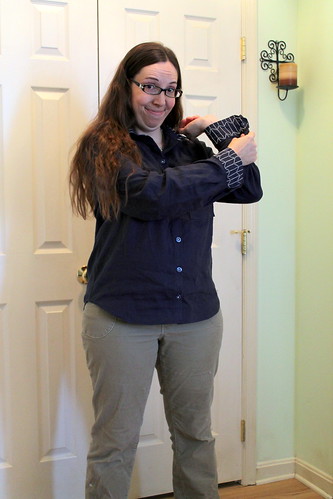 I mean, look how much extra fabric there is around my arms here!

I do have fabric, thread, and even buttons to make a flannel version, which I’d like to tackle before April so I have it for fall and cooler spring days. But I definitely need to do some tweaks to this pattern first. I can’t really think about anything below my ribs for fitting at the moment, other than maybe adding some length so it covers my hips better, and that those weird bubbles around my waist when I raise my arms will probably disappear once I’m not doing the baby belly thing, I hope? But I am considering if there’s anything I can do for the sleeves in the meantime. I’m good with the length of them, because I can raise my arms into flute playing position and my wrists are still covered perfectly. But the shoulders are dropped about an inch too low, so I need to figure out if there’s a way to get that back onto my shoulders without changing the depth of the armhole. That hits in a good spot.

I could also definitely stand to slim down the arms some, because I can seriously push the sleeves fully above my elbows without unbuttoning. (Granted, part of that is that I was completely guessing at buttonhole placement when I did the embroidery, so it’s out too far. But still.) 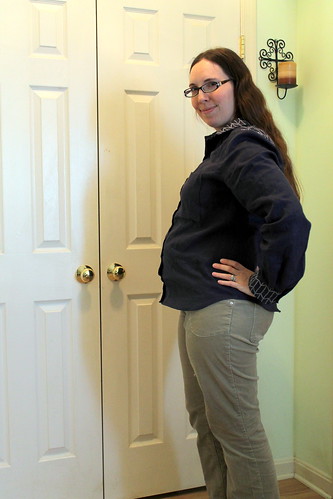 So, all in all, maybe not the most flattering look…but then, not much is when you’re halfway through a pregnancy (see bump), rarely getting enough sleep because your toddler still isn’t sleeping through the night, and got stuck wearing glasses for a couple of weeks. (I know, positive body image and all that, but the truth is, I’ve always felt more confident when wearing contacts vs. glasses.) But it’s wearable, and I really am proud of the embroidery and the overall construction. I’ll need to figure out how to style it post-bump, too, since literally the only non-maternity pants that I own that sort of fit before this are one pair of black pants for performances, and one pair of blue jeans. I do have some grey denim to make jeans that I got specifically with this outfit in mind, but then we’re back to that confidence in jeans fitting while trying to lose weight… yeah.