Man, where did August go? There’s actually been quite a bit of crafting going on in Casa Adagio. But I just couldn’t seem to get it together to, you know, actually finish something this month. But I do have several things in progress, so here’s my monthly update.

So here’s what’s been happening in my little world… 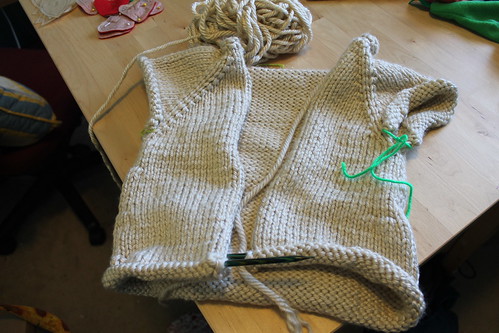 1. Knitting project the first. Awhile ago, I started knitting the Latte Baby Coat for Hobbit, after inheriting some bulky acrylic from a cousin who tried knitting and decided it wasn’t for her. I thought this would be a quick project because of the thick yarn. Boy, was I wrong! For one thing, I had to entirely frog and restart it, because I originally started to make the hooded version. Then I realized that I misread something, and was several stitches short. That, and the hood took nearly half of my main color of yarn. So I started again, with the admittedly less cute hoodless version. Hobbit currently hates all things resembling hats anyway, so I guess it’s for the best. And this is how far I’ve gotten. I had to buy another skein of yarn anyway, as this is much more of a yarn hog than I’d anticipated. I’ve discovered that bulky yarn is hard on my hands, too. So I can only do a few rows at a time. I’m glad that I started this as early as I did, since I’m not sure if it would be ready for the cold weather otherwise. You know, if he even lets me put it on him in the first place. He’s in full fledged toddler mode now at 14 months, so you never know! 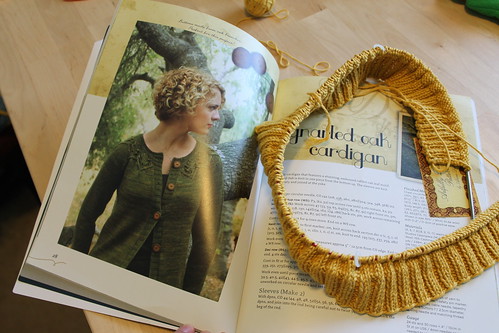 2. Knitting project the second: I decided to mix it up and also start a long-planned project for myself. I’ve been wanting a nice mustard cardigan for awhile, so I finally started it. I still need to acquire one smaller cable needle for it. Amazon sent me the wrong needle size, and trying to wrestle Hobbit into the car seat to drive five minutes to the post office to do a return and hope they send me the right size doesn’t seem worth it. So I’ll just order another one sometime. Like in a year or two when I’m close enough to finishing this cardigan to actually have to think of button bands. Did I mention that I am quite possibly the slowest knitter on the planet? 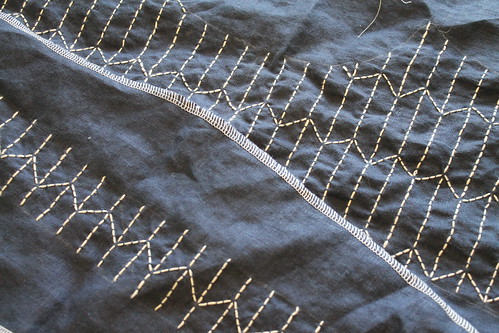 3. Sewing project the first: I finally started the Grainline Archer shirt that I’ve had queued for, oh, two or so years. I think what was holding me back was the fabric. It’s a perfectly serviceable, lovely-feeling Japanese linen…but oh so plain navy blue. I just couldn’t get excited about that, especially since 2 of my 3 pairs of pants that vaguely fit are blue jeans. (I do have some gray denim to fill that particular wardrobe hole, but you see how long it takes me to actually sew things on my list…) But thanks to some inspiration from a fairly recent issue of Seamwork, I’ve gotten past my mental block, and am quite excited about my embellishment! This is the yoke and the collar, with the addition of sashiko embroidery. I’m also going to do this on the cuffs. I won’t go into more details now, since I’m also possibly the last indie pattern user on the planet to make this shirt and I’ll need something to talk about in the finished project post. But I am quite pleased so far. And, surprisingly, enjoying the process quite a bit. 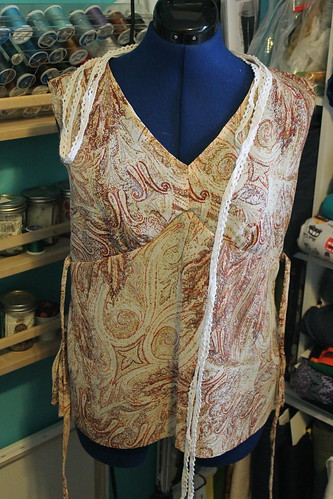 4. Sewing project the second: I have fall sewing on the brain, and therefore cut out a shirt from some fabric that’s been in my stash for at least a decade. It’s stuck here for two reasons at the moment. My attempt to tea dye some stark white inexpensive crochet lace trim resulted in barely any color change at all, and I need to give that a second go. As you can see, it’s still too bright. Also, I ran out of thread that was even remotely matching, and couldn’t refill my bobbin until I bought more. But hey, I’m stashbusting!

5. I did the worst closet purge of my life. I had to part with so many me mades this time that still just don’t fit anywhere remotely close to well. A few things that I couldn’t bear to fully let go of, like this jacket and all of my Thurlow pants, are going into the refashion bin. Maybe those pants can at least be revived as kid’s shorts or pants, because I only got about one year’s use out of them and the fabric is still in great condition. Plus then I get to keep the buttons. Still, I’m rather bummed about this whole process. 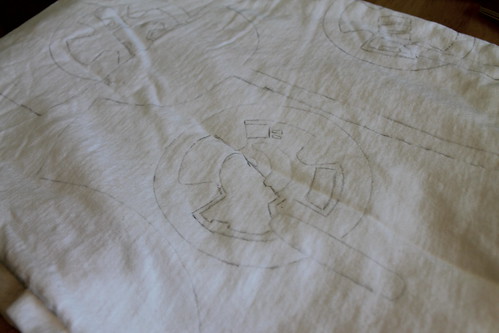 6. I did buy some fabric. Mostly for Hobbit’s Halloween costume this year, which I’ve gotten as far as tracing some pieces and sketching out for some hand-painting that needs to happen with it. But I also did some selfish shopping for a sewing dare. Gillian dared me to make myself an everyday outfit based on Lord of the Rings costumes! So I bought a piece for my main component. (I needed something for free shipping on Fabric.com anyway.) More on that later, since the Halloween project has to take higher priority.

7. On top of all of this, I’ve sloooooowly been making a fourth and hopefully final batch of cloth diapers, which will hopefully last through any growth spurts that may come before Hobbit is ready for us to start the dreaded toilet training process. I’ve got the covers done as of this month, but need some time to do the inserts. It’s just serging around rectangles and adding some stitching for fold lines, but I still have to cut about half of them out in the first place, too.

I think that’s all of it! So I’ll have something finished to show. Eventually.

3 thoughts on “I move slow and steady…”