The good news: I finished a thing! Two things, in fact!

The not so great news: They’re both from a very basic pattern I’ve made before, and therefore not super exciting. But a girl’s gotta sew what a girl needs in her closet, right?

Both of these tops are from the Maria Denmark Kirsten Kimono tee. And basically solids. Which is generally not something I particularly enjoy sewing, given my printaholic tendencies. But I’ve realized that I am sorely lacking in some basics, as I’ve been slowly purging my closet since May started. 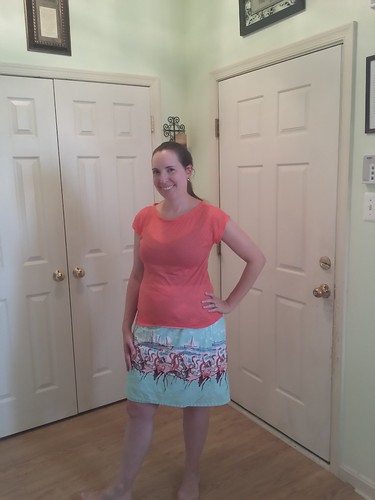 This first one is from a coral hatchi-esque knit that I got for Christmas this past year. When going through the Wardrobe Architect, I discovered that basically everything in my closet was cool colors (you know, since I tend to gravitate towards blue and green everything), and I need to inject some warmth! The fabric was mostly ok to work with, though I had an awful time with the neckline. My old Bernina just doesn’t have a stretch stitch, so I usually have to fake it with long, narrow zig zags. And despite that and using the walking foot, it stretched out like crazy! I ended up turning it under and stitching it inside the shirt. The three-layer thickness still makes it lay not that great, but it’s definitely better than it was. 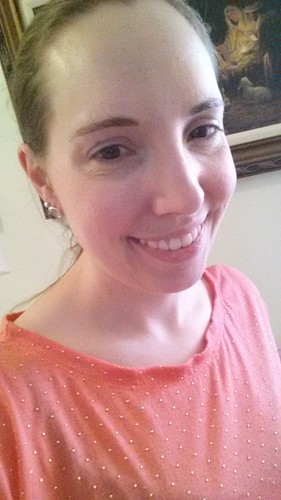 The fun element of this one is that it has metallic gold raised polka dots! They’re very subtle, but it still makes it feel more print-like to me. And I’ve been wearing it a lot lately. It’s done well to help my flamingo skirt from last summer graduate from its near closet orphan status, too. (Gotta love my phone selfie pics, right? But it was either this or possibly not post for another month. Oh well.) 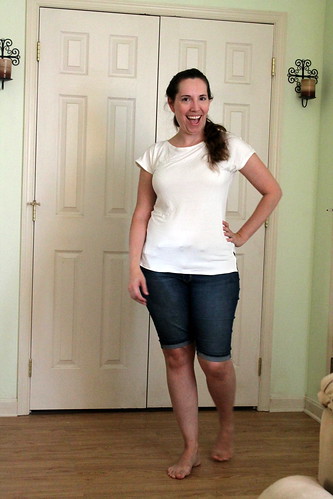 The second shirt is just a plain, solid ivory. I recently bought 3 yards each of ivory and black rayon jersey from Joann’s, because I need multiple basic tops in both. (A third of these in black is likely to happen soonish. I literally have no plain black tees, and with my skirt collection, it’s badly needed.) So to make this one more interesting for me, I decided to hack the pattern slightly. My idea was to channel Rey from the latest Star Wars movie. So I lengthened the sleeves a bit, and added a slight curve to the hem. I also ended up just doing a simple turned under neckline hem– I wanted to try the fold over elastic method mentioned in the instructions, but the stuff I had looked absolutely yellow next to this cream knit. So that will have to wait. 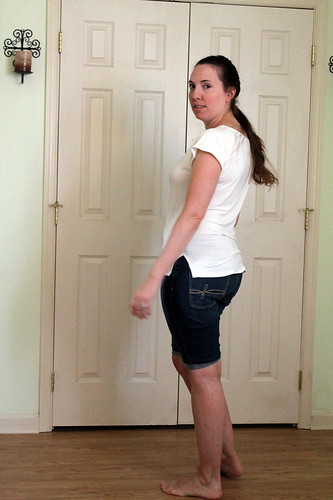 When sewing it together, I ended up deciding to add a split in the side seam to make it easier to get the hem smooth. In retrospect, I’m very glad that I did this, because the shirt looks a bit unflatteringly snug around my midsection if I don’t wear it with something thicker like jeans. So I probably should have added a little more ease in the front, but the split definitely helps. Either way, I think this is probably going to end up more of a layering tee than anything else.

I’ll admit I’m a little disappointed in how both of these turned out, especially since my previous Kirsten tee still fits in a much more flattering way than the ivory one, despite being sewn pre-pregnancy, and the neckline actually did what it was supposed to, unlike the coral one. But I can still use both of them in my wardrobe, so I guess that’s about the best I can hope for right now.

And I did have one more project for this month, so expect to see that in a couple of days.

8 thoughts on “How very exciting.”

Opinion time! Since my next step on my project involves the collar, I need one largish button on the tab. So I raided my stash, and here’s what I found. Should I use the blue button (salvaged from a falling apart raincoat), the Celtic looking horses (taken off of one of my old jackets that I outgrew with the babies), or the coat of arms (left over from an old Jack Sparrow-esque pirate costume)?
Jasper sweatshirt progress. It’s been slow going, though isn’t it always with me? But I think it’ll probably go a little quicker now that the bulk of the construction is done. Just hem bands and collar to go. #workinprogress #jaspersweaterdress
First time making it in the sewing room since about a week ago. So I guess I forgot to grade the pocket slant out with my hips. Meh. We’ll call it a design detail. #waiwot #jaspersweaterdress
I finished the #NewLook6298 dress this weekend, after some fitting tweaks to make it look less sack-like. It works better with the scarf, I think. #freshoffthesewingmachine
Progress shot of my New Look sweater dress, though I’ve added the neckline since. It needs some tweaking, since Big 4 over-easing strikes again and I can’t seem to make any dresses that aren’t just frumpy middle aged mom clothes since the third baby came. (Yeah, I’m a bit discouraged.) #workinprogress
If you don’t show off when #ithaspockets , are you really making a dress?