Once upon a time, I made a pair of jeans for a Craftsy class. They weren’t perfect, and I stupidly made them from non stretch denim, because the jeans I based the pattern on weren’t stretch either, and my weight didn’t really fluctuate all that often. They were the best-fitting pair of jeans I’d made so far, and I wore them proudly. But after several years, during which I got married, gained a couple of pounds, got pregnant, gained a lot more pounds, and the belt loop in the back irreparably tore off from wear, I had to retire them. 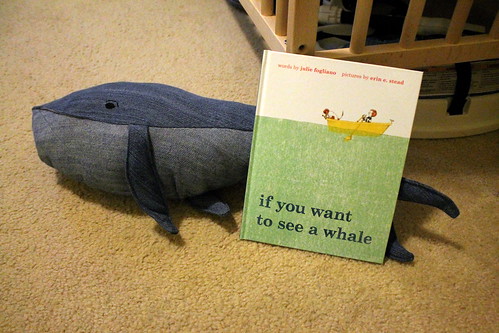 While I was still pregnant with Hobbit, I went to Kohl’s with my mom one day. They occasionally do this thing where they’ll sell picture books and accompanying stuffed animals, and donate the proceeds to charity. Reading was my very first hobby love– I honestly can’t even remember learning to do it, because my parents taught me really young. And children’s literature is something I’ve continued to love. So of course I couldn’t resist buying one of the books. The one that I picked out of the four options available was called If You Want To See A Whale, and it’s a cute little story about how patient and observant you need to be if you want to see a whale. But I couldn’t really justify buying the stuffed whale to go with it, especially since I’d already saved a denim whale tutorial on Pinterest. 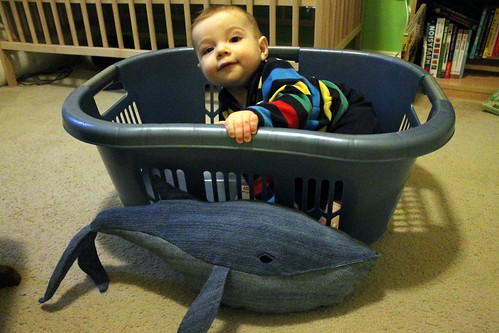 I cut this out and embroidered the eyes back in December, but then set it aside in favor of organizing the room, so I’m counting this as a UFO project. That’s not something I usually have lying around, but finishing those is the theme over at The Monthly Stitch this time, so let’s just roll with it, shall we? It was a fairly quick and easy sew, other than getting the front fins turned. There’s still a bit more lumpiness at the tips of those and the tail than I’d prefer, but I clipped and graded the seams as much as I felt I safely could. It’ll just have to do. 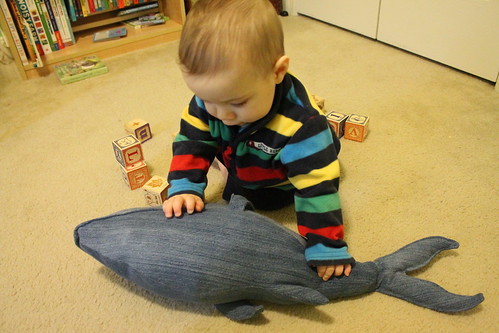 Since the theme at the Stashbusting Sewalong this month is using up scraps– and because stuffing is expensive– the whale is mostly stuffed with the leftover blue lace from the shirt I made in December, and the yarn left over from my Roheline cardigan. Since that was an unraveled thrift store sweater to begin with, and the yarn is kind of kinky and splitty as a result, I didn’t mind using it up in this way. I did still have to use some stuffing to finish it out, but since I was was able to minimize it, I have enough left to at least start the next toy project, whenever I get to that. I have to admit that even if it’s not necessarily stuff he needs, I’m really enjoying the chance to make stuffed animals and toys! Especially since he’s still at the age where all handmade clothes get outgrown in 3 months. This is (maybe) a better use of my time where I can still make stuff for him, and it did keep some perfectly broken-in denim out of the landfill! 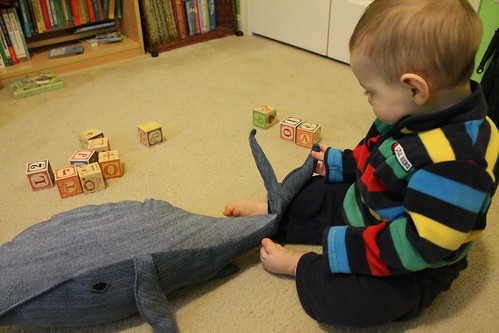 Hobbit’s opinion, so far: it’s interesting, and he seems to like the floppy tail. He loses interest in it pretty quickly, especially if there’s blocks to knock over or a doorway he can try to escape from, but maybe he’ll like it better when he’s older, and the ability to crawl isn’t such a novelty. Especially, I hope, for cuddling up with for a story.