If you were to ask me what the hardest thing about parenthood so far is, hands down, it would be the sleep factor. On the one hand, I’ve learned that I can survive, even function, on far less sleep than I thought possible. (Most days, anyway.) On the other hand, it’s driving me absolutely bonkers that most days, Hobbit will either barely nap at all, or literally only nap when I’m holding him. Believe me, I’ve tried putting him down, and it usually results in waking up the second his body touches the crib mattress and then crying if I put him down the rest of the way. It’s a good thing I’ve been trying to embrace the slow crafting lifestyle…

As you can imagine, I’ve gotten a myriad of advice from well-meaning people. I won’t get into that here. The relevant tidbit is that one of my best friends, who is on her second child (3 days younger than my own, they were meant to be friends!), suggested that I try this swaddle blanket thing. It’s basically supposed to be this miracle thing that instantly improves the baby’s sleep. I thought about it, I really did. But given how many different things I’ve tried so far, I just couldn’t bring myself to pay almost $40 for something that might not work. Especially since it looked like it really wouldn’t be that difficult to come up with something similar. After asking around on a boy sewing-specific group on Facebook, someone pointed me to the Star Sleeper from Koerbs Bros. 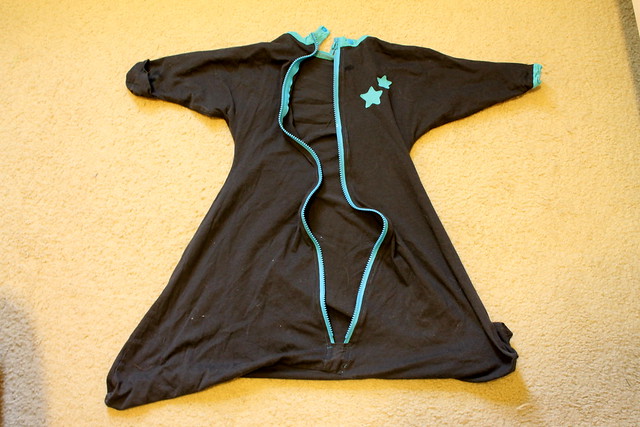 So this is my version. I modified it a little, mostly to straighten out the lines between the feet to make it more of a sleep sack. But I also added a tab to go behind the zipper stop, because I was afraid it would scratch up his neck– the separating zipper was pretty stiff and plasticy at the ends. I had to buy the grey fabric, because I literally didn’t have enough yardage of any knit that wasn’t straight-up polyester. And Hobbit gets hot easily, so natural fibers and breathability was a must. The blue bits are scraps from this top, which has been languishing in my recycle bin ever since it started developing holes almost right away. 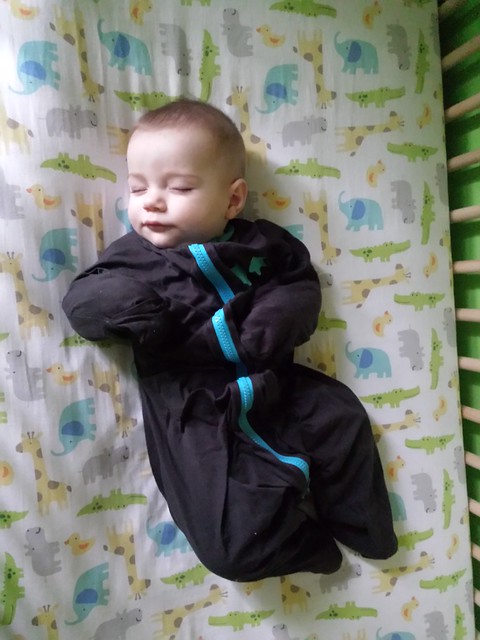 And here it is on him. The verdict? Well…. I’m not sure yet. The first time I tried it on him, his first stretch of sleep was longer than it had been. But then he was still waking up every 1-2 hours after that. I have gotten him to nap in it, but only for about 45 minutes, tops. And lately, it’s all been out the window, as we’re in teething hell and he will literally only sleep for longer than 45-60 minutes if one of us is holding him. So maybe once these two teeth pop out, I can really try again and see if this thing actually works? As it is, I’m really glad that I did this $18ish version instead. 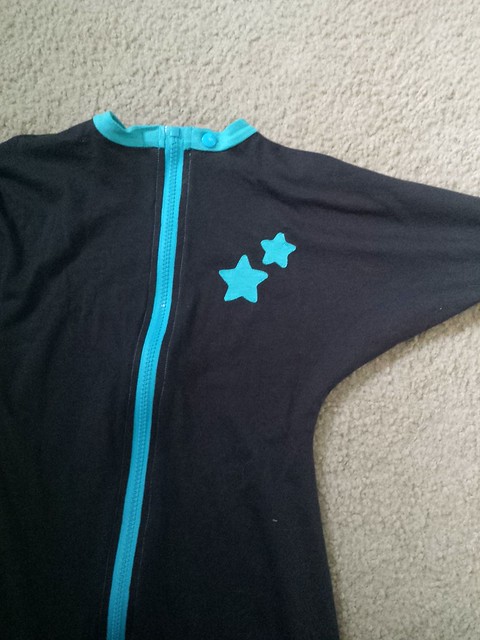 Oh, yeah… I actually finished this on December 31st, so this is the real last project of 2015. Hopefully it won’t be too much longer before I actually can start on a project this year! I’ve spent most of the time lately getting my fabric stash reorganized and updating my spreadsheet, and it looks much better now. Not to mention much more accessible, since I made sure to put all of the fabrics that I know what to make them into out where I can easily get to them, and paired with the relevant patterns when at all possible. I counted up at the end, and I easily have my next 50 projects here, so I’d better get some sewing time soon!