Since falling off the wagon was a recent topic of discussion in the Stashbusting Sewalong group on Facebook, this really is the best analogy I was able to come up with! The thing is, I actually have been doing well with not buying fabric overall. I bought only two yards of fabric in November, and both pieces were for immediate Christmas projects for Hobbit. It’s just that people keep destashing onto me! This time, it was a friend of my grandmother’s, and my mom and I ended up splitting this pile based on what we each thought we could use. I haven’t had a chance to tally up the yardage yet. But at least this time, there were pieces that will be good for little boy clothes. Mostly plaid. 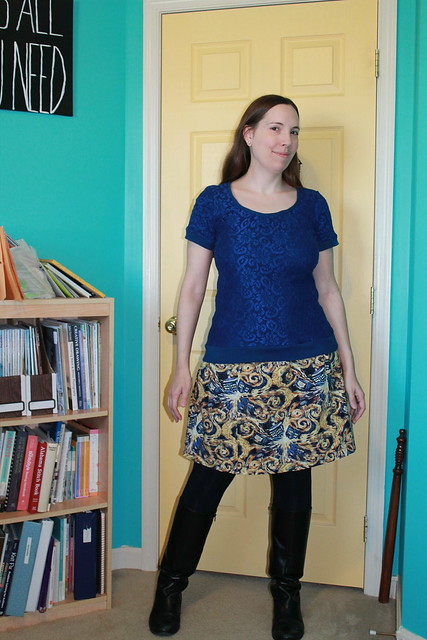 Another thing it had was a piece of mystery blue knit, which I was actually able to mostly use up right away. The November theme for The Monthly Stitch was a capsule wardrobe. Since I technically finished my black Espresso leggings in November (and they fit SO much better after tweaking), I decided to pair that with my exploding Tardis Rae skirt as my pre-sewn piece, and add a top. The last pile of free stash had this blue mesh lace stuff, and the mystery blue knit from this pile, while not a perfect match, went well enough with the mesh that I decided to layer it. 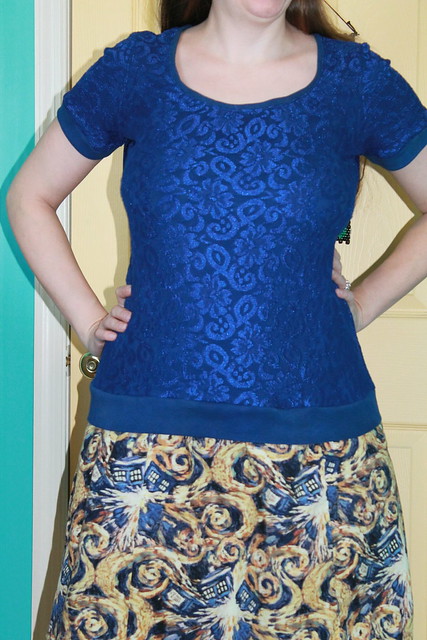 It’s another Sewaholic Renfrew, of course. The bands in plain knit would be easier to deal with than cleanly hemming the mesh and knit together. Also, I was fairly confident that I could adjust it to work a little better for nursing, since my older Renfrews, while admittedly snug at the moment, can still be pulled up for access as needed. I didn’t make this a full blown nursing top, but I added back to the waist (my old ones were graded down two sizes), and also added an extra inch to just the front.

I couldn’t do a pattern hack, no matter how small, without issues. This time, I forgot that adding to the front did not mean I should also increase the neck binding circumference. I ended up with a baggy, saggy neckline that took me a week to rip out. I’m going to blame sleep deprivation for this one. November was rough with the baby, to the point where we’re having to start solid food earlier than I’d intended just to see if more food in his tummy will keep him sleeping for more than two hours (or often less) at a time. (Day one, which was Tuesday, worked out pretty well. Day two, which was yesterday, saw him still waking up every two hours like clockwork. Ugh. At least it’s less than a month until we were going to start him on solids anyway.) 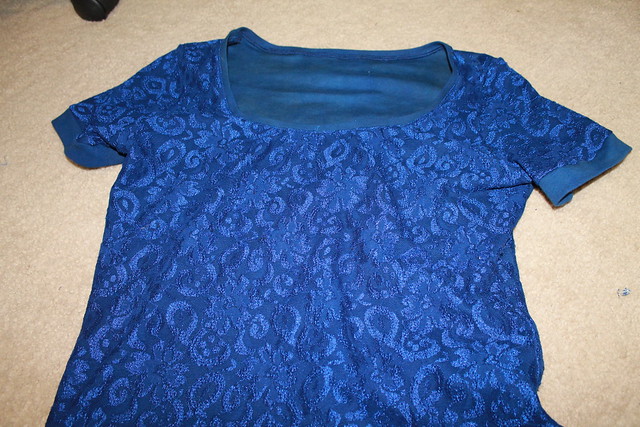 On the plus side, once I finally got that neckline off and gathered the excess to fix that–and the extra stretching that happened when it was stitched on the first time–it came together really fast. Even though I still had to break it into three sessions, and therefore didn’t finish until December 1st. Oh well.

I had to make it short sleeved, due to the amount of fabric I had–I have just enough for a baby tee shirt left over. I think. But I’m ok with that, because this one will be easy to layer and will also go well with a couple of my older print skirts, assuming they’ll fit again as well. The lace and two toned blue keeps it from feeling boring to me as a solid top, which is usually my big issue with solids. All told, I think I busted about 3 yards on this top, though I didn’t measure the knit before starting. I do have some of the mesh left over, but it’s admittedly kind of cheap fabric–good for an experimental top like this, but not something I necessarily want to bother making another outfit with. So I honestly might just use it as stuffing in a plushie I’m making for Hobbit!

I have to say, I’m really liking this mini-capsule/complete outfit style of sewing! My love of prints has definitely left me with orphan clothes more than once, and this is an easy way for me to get more cohesion in my wardrobe without resorting to sewing all neutral basics. I still don’t feel like I’m at a point where I can really justify picking out my own fabrics to add to my stash, given what I’ve acquired lately. (Even though I did buy two things yesterday to use as wearable muslins for some recently acquired patterns, because I just didn’t have the yardage required. I think I’m going to have to up my default “I don’t know what I’m going to do with this but I like it” buys from 2 yards to 3.) But I think I’d like to continue this way of adding to my closet as I can.

10 thoughts on “the stashbusting wagon ran me over”