Given how long it took me to assemble the Lord of the Rings book, I’m utterly amazed at how quickly the second book came together! Granted, I had all of the pieces cut out and ready to go, since I cut out everything for both books at the same time. But the pages on the Doctor Who book were smaller and overall simpler, and had a lot less of sewing two layers together to make one piece. So even with my limited ability to use the sewing machine, both due to the small size of a lot of the pieces and the large size of my baby bump, the pages were all sewn/embroidered and ready to assemble into a book in about a month. I think the LotR one took about 4 times as long! So I’m really glad that I did that one first.

Of course, it probably also helped that Hobbit was quite comfortable where he was, and I had about a week and a half of end-stage/past-due pregnancy where I had nothing to do except watch tv, work on the book, and see if I’d actually go into labor or not. I did wait until after he was born to do the final assembly, since my sewing machine was needed. But aside from that, I’m pretty sure the kiddo was waiting until I finished his toy!

Anyway, here is the Doctor Who quiet book. Once again, I did not design this pattern, it was from an Etsy seller named BantamBB– I’m guessing the designer discontinued his/her shop, because I can’t find it on the site anymore. 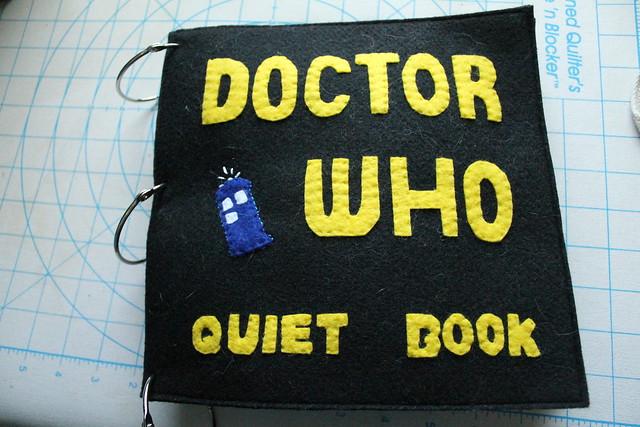 The cover page, which is pretty self-explanatory. 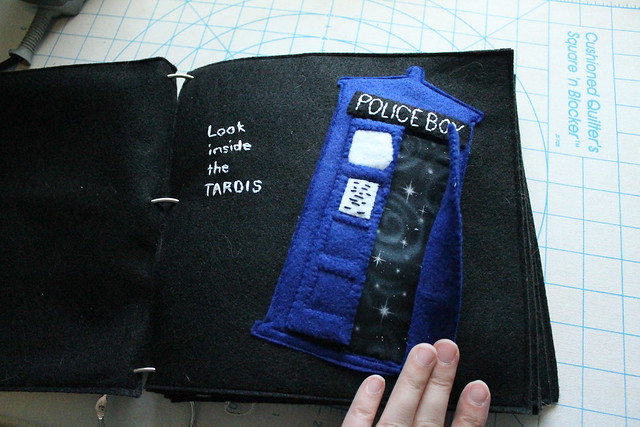 The pattern originally called for a piece of plain black felt inside, but that wasn’t exciting, since the background is also black. So I raided my mom’s quilt scraps, and found this swirly space-looking print. Much more wibbly-wobbly timey-wimey, don’t you think? 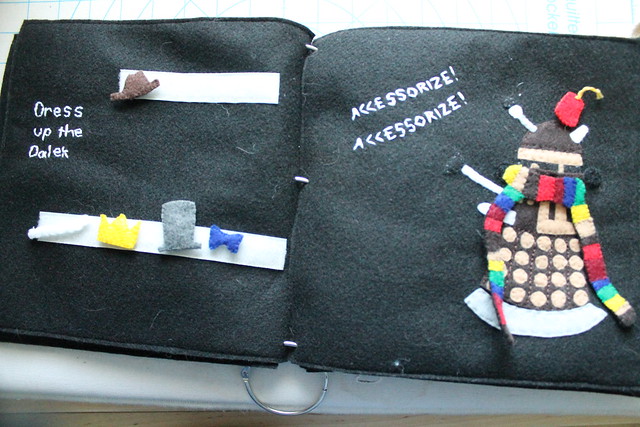 The accessories for this were a little fiddly. Especially the scarf– I did glue it all together first, but didn’t trust the glue to hold long-term. I was having enough trouble getting it to stay short-term! But the Dalek wears a fez now. (Which can be easily removed and swapped out for another hat.) Fezzes are cool.

Also, I guess these are the WWII Daleks, given the colors. 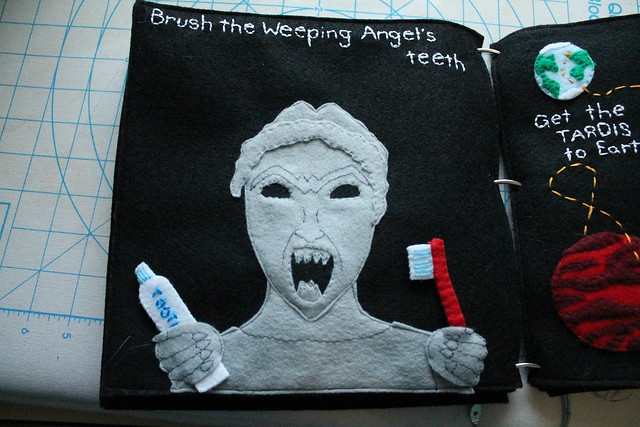 The difficulty with geeky quiet books, which I encountered to a lesser degree, is trying to make some of this stuff a little less creepy for a kid. Which was really hard to do for a Weeping Angel. The toothbrush/toothpaste does make me laugh, though. I’m hoping they aren’t too hard to get in and out of the hand “pockets”. 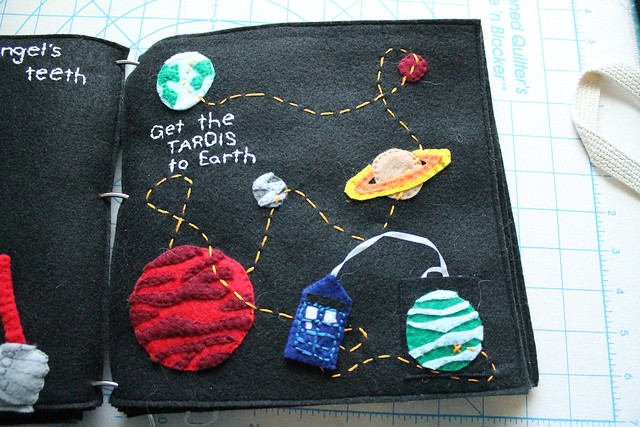 The thing about the pattern for this page that didn’t make sense to me was that it was a line to follow to get the TARDIS to Earth, but the pocket that holds the TARDIS was located right underneath Earth! So I moved it to the opposite diagonal corner. 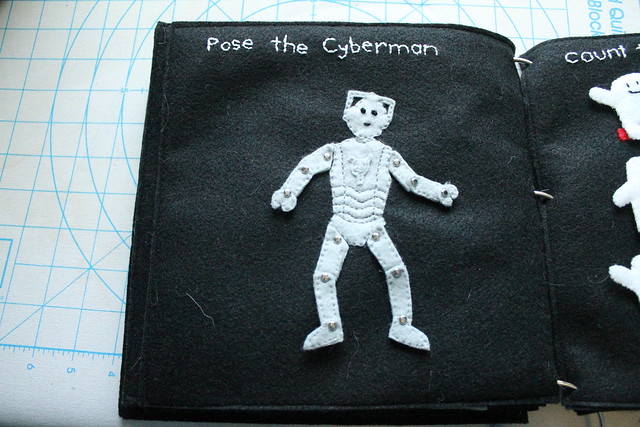 I’m not 100% sure this page is going to function the way it’s supposed to, because I was having trouble getting the brads loose enough to actually make the limbs move, yet tight enough to hold it all together. I guess only time will tell. (I really don’t mean that as a pun, considering the subject matter of this show.) 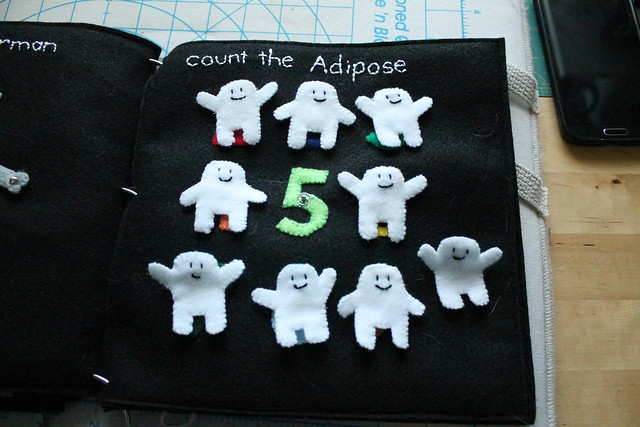 See, it’s educational! And the other quiet book didn’t have anything for number recognition, so I like that this one does. 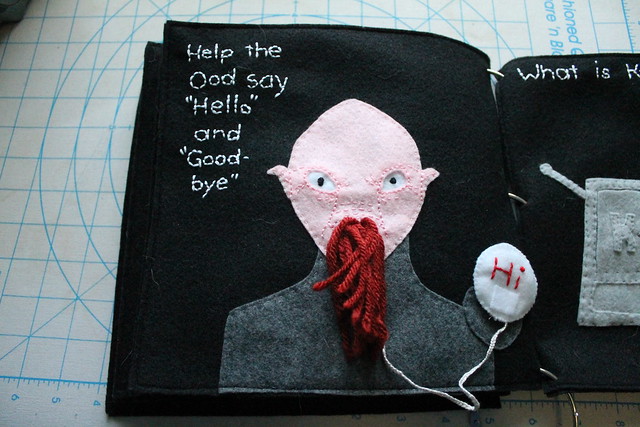 This was another one that I had to try to make a little less creepy. It didn’t help that the pattern example had the red-eye version that wants to kill you. So I opted for the less creepy one, since this is supposed to be a friendly Ood. The ball flips over to say “Bye”. 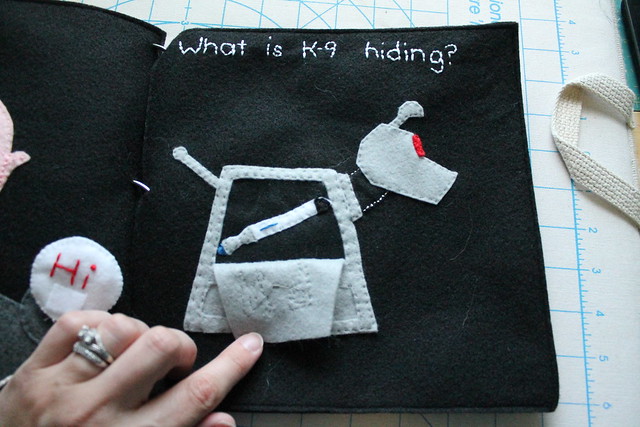 The pattern didn’t actually specify what K-9 would be hiding. So I did my best felt approximation of the Tenth Doctor’s sonic screwdriver. Because, seriously, a Doctor Who book without a sonic screwdriver would be blasphemy.

So that’s it! I’m quite happy to take a break from anything too hand-sewing intensive for awhile, though I’m sure this won’t be the last toy I make for Hobbit. In the meantime, I’m reacquainting myself with knitting, since I’ve found I can somewhat awkwardly hold the needles over him and knit for short bursts during his post-feeding food comas. It’s been a refreshing change, after 6 months of hand-stitching tiny bits of felt.

3 thoughts on “Quiet Book the Second: the Whovian edition”