Now that I’m getting close to the end of my pregnancy, and in lieu of my participating in Me-Made-May this year, I thought it might be useful to take a look back at how I did with sewing for  myself in this transitional period. After all, I’d decided to make this more fun/interesting for myself by treating it as a capsule wardrobe, a la Wardrobe Architect. And I did learn some things about what worked/didn’t work for me. Also, in case a second baby comes along down the road, it’ll help me to have a reference of what I might want to consider adding!

Things I’ll need if this ever happens again:

Biggest hits:
Honestly, aside from the refashioned corduroys (so useful) I feel like the best things I made were the ones that I’m hoping to continue wearing after this is over– particularly the black maxi-dress and the tie-dyed skirt. I may need to do a follow-up post later this summer on how well they actually work for post-pregnancy/nursing. 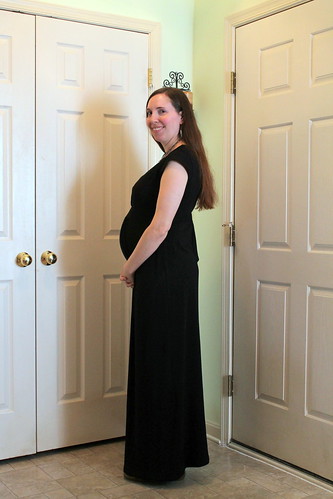 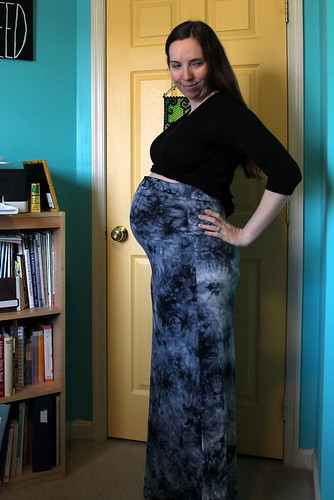 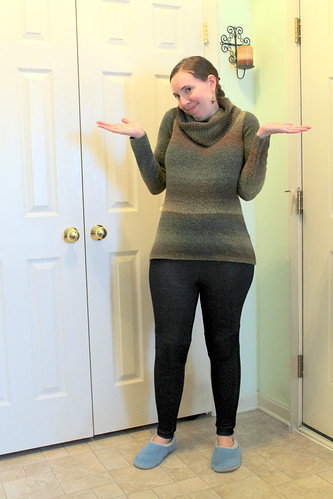 1. The Manila leggings. Though I’m still hopeful that I can successfully revisit this pattern, now that I know that I really need to check the stretch before diving in. And probably add at least 4″ to the legs. But I really just didn’t feel comfortable wearing them very often–the color meant it didn’t work as a tights layer under the two shorter skirts I had (one black and one denim), and I really only wore them twice. One of those was to keep warm under the black dress for a cooler-day music performance at church, and the other was just around the house. And I have to confess that I threw the denim skirt on over it anyway, because even when alone in the house, I just didn’t feel fully clothed when wearing leggings as pants! I’ll probably keep these as a layering piece, but definitely not as a stand-alone.

(I still have to try out my Cake Espresso pattern sometime, too. If that one works out better, I might just transfer the belly alterations to that pattern if I ever need to sew maternity leggings again.) 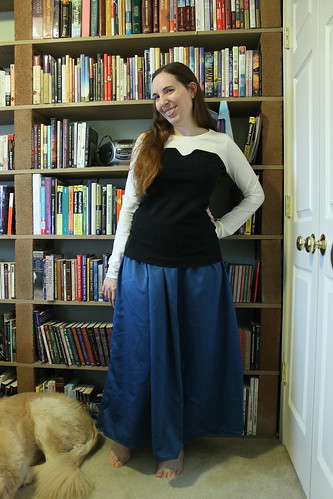 2. The Ariel skirt. I actually only wore this one once, aside from the photos–I didn’t want to wear it over the winter because of the cold, and when I finally pulled it out in the spring, it just didn’t work well. I had to tie the drawstrings under the bust, which made the length kind of strange, and left a lot of weird wrinkles under the belly of the maternity top that I paired it with. Fortunately, it didn’t take me that long to cut and sew. And since it’s essentially two big rectangles and I still have almost 3 yards of the fabric left, I think this will be a good candidate for a refashion. Or at least a wearable muslin of some other pattern.

On the other hand, I did wear the top quite a bit. Though, as I stated before, I think the pattern hacks would need some tweaking for this to work well in later pregnancy. It fit fine for well over the first half, though.

Other things I won’t be keeping/need to rework:
1. This isn’t one I made, but I bought this cream-colored maternity sweater at Target. I’m blaming this on poor fabric choice on their part–the structure itself is fine, but before the winter even ended, the color of the sweater just looked dingy and sad. I may just try to overdye it to extend the life.

2.This top. Though it wasn’t a maternity top, it actually worked well to get me through the winter, since it was roomier in the waist than a lot of my usual tops. And it’s not a complaint about the pattern, since I used the same one to make my sparkly knit top from earlier this year. It’s just that since this one was already several years old, the fabric was starting to pill to begin with. And with all the extra wears and washes it got this winter, given that I was pulling it out at least once a week (if not more), it’s just unsalvageable now. I do hate to just throw clothes away, even the worn-out ones, so I’m thinking I might just cut this one up and use it to stuff a toy or something. Stuffing is expensive, anyway.

So, that’s my little wrap up of how my me-mades have been working for me during a period of major physical changes. I already have a mental list of patterns I want to tackle once this baby comes! Now if only I could figure out a way to predict my bust size so I could start tracing or cutting…

7 thoughts on “Evaluating the mini-wardrobe”

It’s been a rocky start, but here’s proof that I still know how to use this sewing machine. #waiwot #homemadehalloween
I finished up my #ItSFortuna shorts last night, with a few changes from the pants version that I made a couple of months ago. My least favorite feature of the original pants is how saggy the pockets get when I stick my phone in them, so I added some reinforcement with a self facing this time. So far, so good. I also added some extra stitching through the elastic underneath the drawstring tie, since the back stitching hasn’t been enough to keep it from twisting. And to try to reduce the gym shorts vibe, I ended up rolling the hem to the outside to make a faux cuffed look. The fabric is a soft French Terry and very comfortable, but I think that next time, I’ll need a more fun color or a print!
Recent thrift store score, minus Gandalf. I finished my personal sewing project last night (maybe I’ll take pictures today, if the kids let me). Given how it’s taken me all summer to sew three knit garments, and we’re starting up our homeschool again in a couple of weeks, I need to start Halloween costumes now if I want to have any chance of finishing in time! The boys decided they wanted to do LotR costumes this year, and I am HERE for it. So hopefully, I’ll succeed in turning these four valances and single curtain into a wizard and an Elf. #refashioning #costumesewing
Nothing exciting about all this gray, except that I actually managed to sit down at the machine for the first time in over a week. Getting kids to sleep in a timely fashion is hard in the longer summer daylight hours. Also, experimenting with a different approach to the pockets in the #itchtostitchfortuna .
I did not sew this new skirt. (It’s from @dharmatradingco, and #ithaspockets !) I did dye this skirt, though, finally trying the ice dyeing technique that I learned about from @elizabethmadethis . My goal was to make it look like the ocean, and I think it worked out nicely.
Between the humidity frizz and the uncooperative toddler, this is a rather derpy first look at my #ItchToStitchPrague top. But look, I sewed something! I’m not sure how I feel about the cold shoulder look on me, and I know I’m super late on that trend. But my 6 year old heartily approves of the dinosaur astronauts.