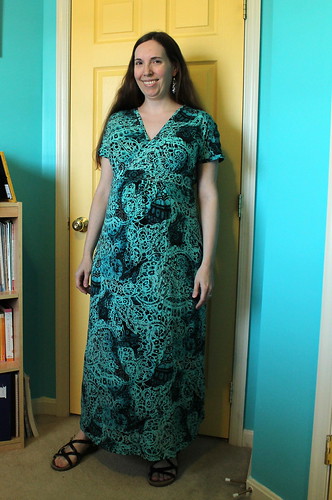 That’s right, I finished another maxi-dress! No camouflage baby bump for this one. It kind of looks like I just have no waist at all. (I guess I don’t right now, really.) Honestly, I don’t really feel like there’s a whole lot to say about construction, since this is the third time I’ve used the Tiramisu bodice and the exact same skirt modification that I made on my last dress. And I already detailed the nursing-friendly alteration in my last post. Really, the biggest issue I had with putting this one together was my iron–it had been acting up for awhile, and I finally hit the last straw with it while trying to press the skirt seams the other day. After all, an iron that keeps turning off while you’re actually pressing with it at the moment, and then taking forever to turn back on (and usually some unplugging and replugging–really annoying when the power strip is on the floor and you’re 7 months pregnant!) So I ordered a new iron. Hopefully this one will hold up better, since the one I’d been using lasted me less than 2 years. It’s supposed to arrive today, and none too soon, because it really shouldn’t take me half an hour to press a hem because I have to keep waiting for the iron to turn on! 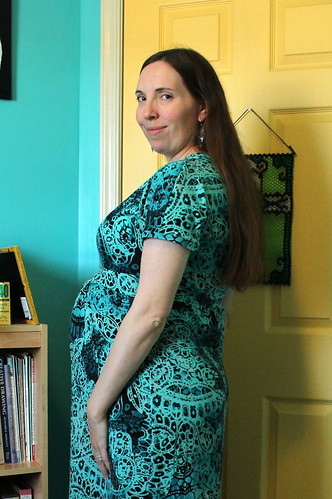 Isn’t this print fun? It’s one of the pieces I treated myself to when I visited Mood in NYC a little over a year ago. I’d gotten 3 yards with a maxi-dress vaguely in mind, though I certainly wasn’t expecting that it would have to be a baby bump-friendly one at the time! But I do expect that I’ll be wearing this one a lot over the coming summer. Even though the two patterns didn’t quite come together as smoothly as I’d hoped. The back seems pretty loose to me in comparison with the black dress, and it is so tempting to try to take it in around the empire waist a little. Or fake in a back seam with the serger. Or something. I have to keep reminding myself that I still have the rest of this pregnancy/the belly only getting bigger to go, I have no idea what’s going to be up with my bust size after that, and it would be better not to over-fit. I can always try to take it in a little later if needed, though it might be nice to have a looser dress when the Mid-Atlantic summer humidity kicks in. (I did tweak the sleeve/underarm area, though.) 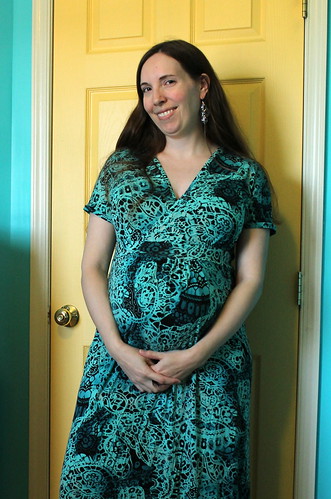 This will probably be the last garment that I make for myself until after Hobbit arrives, to be honest. I’ve got less than 8 weeks to go before my due date now (yiiiikes), so despite the fact that I have nearly no pants that both fit and are weather-appropriate, it seems a little pointless to take the time to sew any more maternity-type clothes. I am starting to think ahead to just straight-up nursing-friendly, or things that will work with another period of my figure changing around on me, and I do have some patterns in mind for when I’m feeling up to trying to sneak in sewing time post-baby. Is it weird that after so much time sewing knit garments over the last several months, I’m really starting to get the itch to dig into my wovens stash? But since that has to wait until I have a better idea of what size to sew, any projects that show up here over the next several weeks will probably just be a big babypalooza. I know that’s not the most interesting thing for a lot of people, but honestly, this blog is pretty much just my personal craft journal anyway, and this is the stuff I need to be making right now. So, sorry not sorry, I guess?

On a slightly related note, I’ve decided that I’m going to be sitting out of Me-Made-May this year, though I will happily follow along with what others are doing! Honestly, pretty much everything I’ve made that fits right now and works for the season has already been shown on here in the last couple of months, I really only have enough of that to do about one outfit a week, and there’s other things I need to prioritize over stressing about outfits and taking pictures. Like continuing to stuff the freezer with as much pre-prepped food as possible, the mental list of baby sewing projects that I’d still like to finish in advance, and getting some music together for a couple of my flute students to work on while I’m out of commission for teaching. Not to mention that by the end of May, I’ll be in the range of “could potentially pop any time”. Hopefully I won’t go that early, especially since a couple of my students are participating in a recital two weeks before my due date, and I’d like to be there to support them. Plus, the only date that worked for everyone involved in planning my baby shower is the last Saturday of the month, and I’d really like to not miss that due to being in labor!

I also have to admit that I’m going to be a little sorry when the Small Human Being Sewalong wraps up at the end of this month. It’s been fun getting to know a couple of new-to-me bloggers, and helpful to follow along with the discussions of what ends up being useful vs. not/how to find sewing time after baby, and so on. But I’m super-close to finishing another project for that, and may be able to knock out at least one more. In the meantime, I’ll just enjoy this dress and all the pretty, swirly blues.

8 thoughts on “dressed to the max(i)”