Happy spring, right? Here in the good old Mid-Atlantic, ours started with winter trying to get in one last sucker punch! I think it’s time for a breakup with cold weather, because I am OVER winter clothes. I know I say that every single year, but with my currently limited wardrobe choices, it’s even worse. I’ve been wearing the same 2 pairs of pants (with the jeans mixed in as I can) and the same 3 cardigans almost every single day. And my one purchased winter maternity top is looking rather dingy and sad. I guess that’s what I get for buying a cream sweatery-looking top.

That being said, with the limited window I have remaining in which making clothes for myself to wear throughout the rest of this pregnancy still has a point, I’m trying to focus on things that will carry me through the spring and into the summer. And, hopefully, still be wearable afterwards. 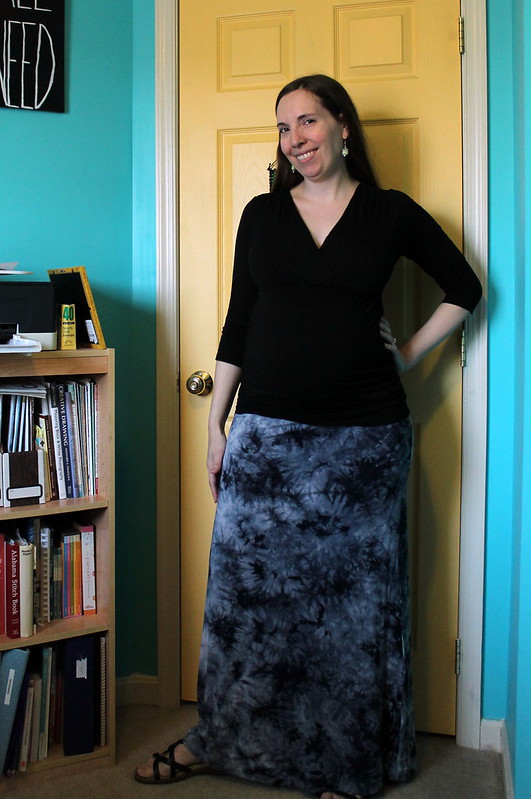 Enter my new maxi-skirt! The fabric is a luscious-feeling bamboo-rayon jersey blend, part of the mini-stash of knits that my parents gave me for Christmas. It took me a lot of thinking initially about whether this fabric wanted to be a skirt or a top, but once I realized that I only have 2 pairs of non-jeans maternity pants left that still fit (I’ve outgrown the third, which were a little small on me when I first chopped them into maternity pants), and they’re both reconstructed corduroy pants, a warmer-weather friendly piece of bottomwear won out.

This month’s Stashbusting Sewalong theme is sewing with patterns that you already have. So I based this skirt rather loosely on Simplicity 7229, which I’ve used a few times before for skirts and capri pants. (I’m having to link this to my Pinterest since it’s out of print, so hopefully it’ll work!) The original skirt is pretty basic– the two pieces for the front and back are the same, and it has a wide yoke with a drawstring top. I’d always made it in wovens before, but here’s the changes (aside from knit fabric) that I made to make it more maternity-friendly: 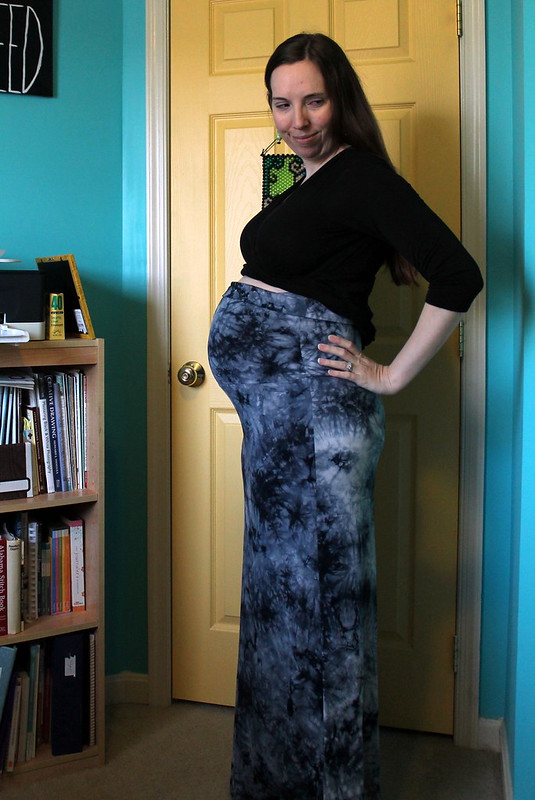 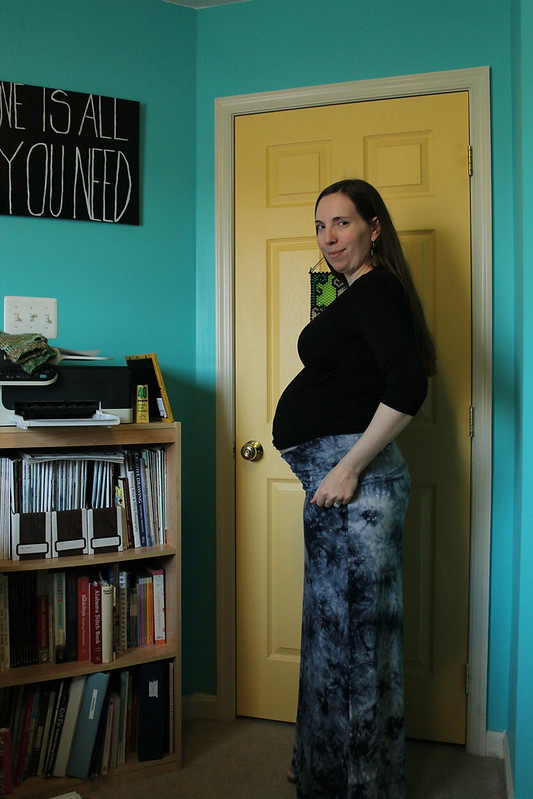 It folds down into a yoga-style waistband, so I’m hoping that it’ll be snug enough that I can wear this skirt once I’m a little smaller around the waist again, too! It’s obviously hard to tell how that will work right now, but a girl can dream, right?

Overall, I’m really pleased with how this adaptation worked out, and how fast it was to sew together! I did all of it, including cutting out, in 2 sewing sessions. Which is pretty speedy for me. Depending on how this works out to wear afterwards, this just may be how this skirt pattern ends up getting used from now on. It’s so tempting to find more of this type of knit and whip out a few more! But I have several pieces of knit that I still want to make other clothes out of to wear in the meantime, so I shall try to restrain myself.

I used up pretty close to a full 2 yards on this. As an added bonus, I had just enough fabric left to make a little something for the Hobbit! We’re actually doing pretty well with collecting baby clothes so far, largely thanks to my mother-in-law, who’s brought over multiple bags of things that neighbors and acquaintances were getting rid of.  At least, we’re doing pretty well with onesies and pajamas. What seems to be largely lacking is pants. Given his nickname, all I can think of is that old Lord of the Rings movie meme where certain words get substituted with “pants”. The most famous being…

Which never fails to crack me up, but Hobbit is going to need some pants eventually. So I made some. 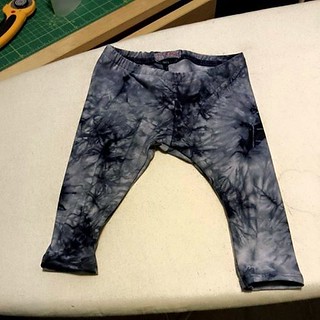 The pattern was a freebie that I found on Craftsy, the Go To Baby Leggings. I wasn’t entirely sure about tie-dyed pants for a boy, but a few kind sewcialists on Instagram talked me into it, and I hope these actually end up fitting him because I think they turned out pretty cute! I made these in the 3-6 month size–partially because lightweight jersey pants going into the fall make sense, and partly because I literally did not have enough fabric left to make them any bigger. Doug was pretty impressed, I think–I cut and sewed these in their entirety on Thursday, along with finishing the skirt, and his instant reaction was that they were adorable and I should post them on Facebook. Always a good sign. I wish I knew how they were actually going to fit him, because I had these cut out and sewn together entirely in basically no time! But at least I have the pattern tested, so if it works out, I can always fall back on this as a quick project while he naps or something.

11 thoughts on “it’s the time of the season”