The trip to my very first fan convention was a ton of fun, despite the lines and sleep deprivation. I got to hang out with a friend who I’d previously only met in the real world once (hi, Faith!), I met several actors from favorite tv shows and movies, and got a couple of books signed by one of my favorite living authors. Oh, yeah, and it was basically one giant 4-day costume party, so of course I was all over that!

Several of the things I wore were me-mades that I just ran out of time to blog, so I’m sharing them now. (This will probably be a fairly picture-heavy post, so consider yourself warned.) 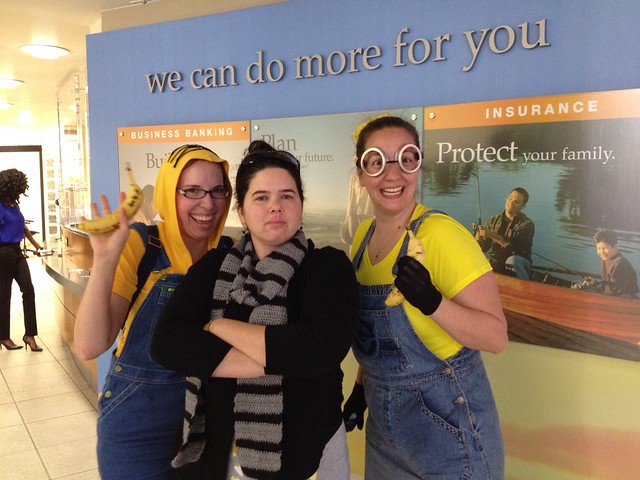 For Thursday, we decided to do a Despicable Me theme– Cassie went as Gru, and Faith and I as her minions! We even found bananas to carry! I went the cheap/lame way out for my goggles and just wore my glasses, partially because I ran out of time to make more accessories, and partially because I had to get up at 3:30 AM to make it to the airport. My me-made for this one was the yellow hoodie. I’d originally planned to take this opportunity to try out the Disparate Disciplines Avocado Hoodie. But due to time/thrift shop constraints, I decided to keep it simple and short-sleeved.  The result is a Renfrew with an Avocado hood. The “hair” on top is just basted-on scraps of black leftover from my recent dress, so I can remove that anytime.I’m actually really happy with how this quasi-hack turned out, and could definitely see more hooded Renfrews in my future! But I’d still like to try the Avocado for real at some point. 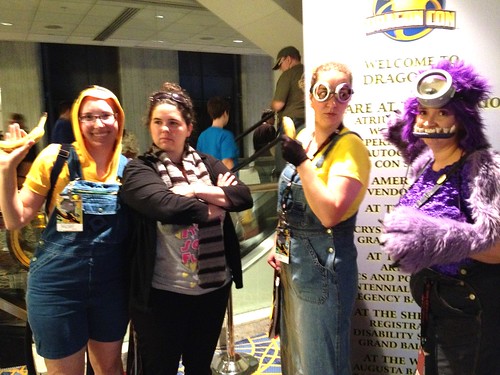 As for the overalls, they’re just horrendous shorts I found at the thrift store. I should be nice, since some other sewist took the time to resize the legs and turn them into shorts. (The inside seams are basically raw and obviously home-sewn, while the hem was hand-stitched.) But it ended up fitting me really oddly–almost too-tight around the thighs, with the torso and straps being too long and baggy. The original overalls were XL, which probably explains it. And if I ever do this costume again, I’d definitely try for different overalls, but  they were literally the only ones I could find that weren’t made for toddlers! I added a hand-painted patch with the Gru logo on it. You can see it a little better in this photo. And look, we found a monster minion! 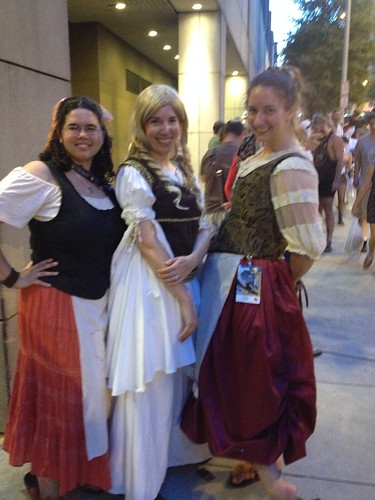 I started Friday off with a Firefly t-shirt, but changed into my old Eowyn costume partway through the day, because one of our main activities that we all wanted to do in the evening was the Tolkien track’s “Evening in Bree” party. (Which was SO fun.) I don’t have much to say about this costume, since I’ve mentioned it here and there on the blog before–the only new addition was the blonde wig. Which did get a little snarly in the back by the end of the party, so I need to figure out how to untangle it without ripping all of that fake plastic hair out. The only other thing I’ll say is that the costumes in the contest were amazing, and I felt very out of my league. But I did have a kid come up to me at the end of the party and hand me a sketch that she’d made of my costume, which I thought was really sweet. 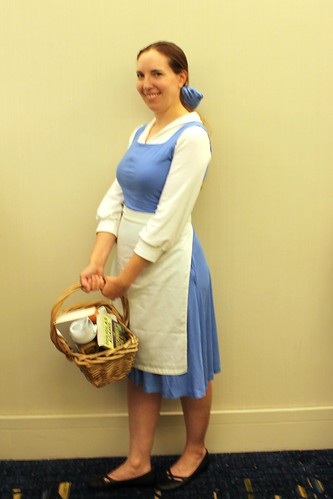 Saturday was Belle day for me, and easily the crowd favorite! I’ve talked about the blue dress and the top here recently. Since then, I added an apron made from an old bedsheet in my muslin pile, and a bow made from scraps of the blue dress. (Just a tube, stuffed with some leftover tulle from my wedding dress to keep it perky, sewn around a hair elastic with another scrap of knit.) I also carried around a basket, which I swapped with Faith, who was doing Red from Once Upon A Time that day because all she needed was a stuffed wolf, and my book didn’t fit in mine. I got lots of compliments from passers-by on how “cute” my Belle was, and several people asked to take my picture. But the two best moments were when I was getting a couple books signed by Jim Butcher, who saw me coming up and sang a line from her intro song in Beauty and the Beast (“Look there she goes, that girl is so peculiar…”), and the little girl I passed in the skybridge between hotels whose face lit up as she squealed, “Belle!” Making a kid happy made me feel rather good about my life that day.

I did have a couple people ask me where the Beast was. I told them that he was back at home, taking care of the library. (Sorry, Doug.) 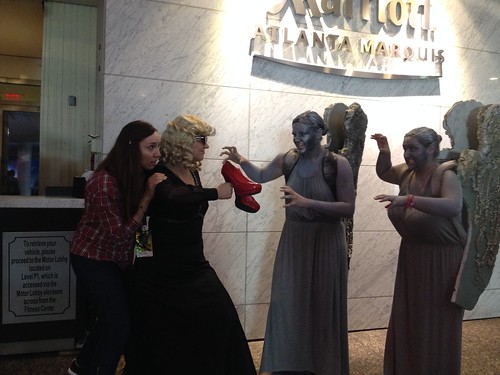 Sadly, I didn’t make it to any Doctor Who-related activities, but Cassie, Faith and I did go around dressed as companions on Sunday. I don’t have any pictures at the moment of Cassie as Oswin/Clara, since that’s on another girl’s phone, but we ran into a couple of Weeping Angels (yikes!), so this is Faith as River Song and me as Amy Pond. This costume was super-easy– just the zipper-leg jeans from earlier in the spring, (because after all of that time sewing the skinny jeans, I saw a picture where the cropped jeans she was wearing in my chosen outfit had that detail!) and a thrifted and slightly modified plaid shirt. Also, tally marks on my arms with liquid eyeliner, because as one person I met put it, “Amy without the hashmarks is just a girl in a plaid shirt”.

This was an easy recon overall, though I guess “regeneration” would be a more appropriate term here! I shortened it to get rid of a tear, took in the sides and sleeves a bit, and cropped the sleeves to more of a 3/4″ length before sewing the cuffs back on. And since one of my costuming goals was clothes I can wear in the real world, I can quite confidently say that I will be wearing this one over the fall.

I saw so many amazing, creative costumes, and it really makes me want to step up my costuming game! Sadly, not all of my pictures are the clearest– they looked fine on my camera, but the ones from the first day or so, while I was still trying to adjust my settings, ended up slightly blurred. But I did go ahead and make a Flickr album of ones that I wasn’t just passing in the hallways and therefore couldn’t stop, and thought were funny, creative, or just plain amazing, along with the pictures I’ve already shared here. (I’ll admit there’s a disproportionate amount of Lord of the Rings-related costumes, and Disney costumes. But I have an excuse for the Disney, since I’m co-hosting the Sewcialists’ sewalong in November!) I’d definitely love to go back again sometime if circumstances/money allows, especially if I have time to do some real costuming beforehand!

7 thoughts on “DragonCon, and what I wore!”