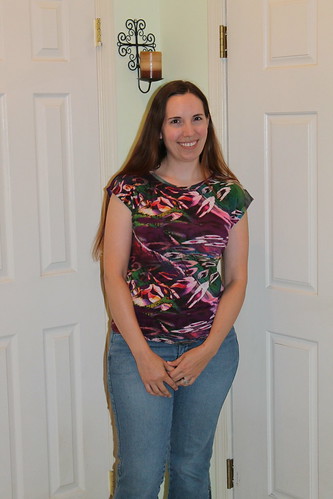 Does this fabric look familiar? It should, since I just used it for my Tiramisu maxi-dress. For once in my life, I got on the stashbusting right away! (I made this in June, but didn’t get a chance to post until now.) After I realized that I had a decent yard left over after I cut the dress out, I grabbed this untried top pattern and cut it out, since it was only two pieces. I figured that if it didn’t work out, I still had the Tira, but I think it worked out pretty nicely!

This is the Maria Denmark Kirsten Kimono tee, which is a free download! I really do love that so many of the indie companies are generous enough to offer some simple patterns for free. I grew up sewing mostly the Big 4, which you can easily get for $1 on sale at Joann’s, so the frugal part of my brain really likes getting to try a company out before spending the average $10-25 dollars that the indie patterns usually cost. (I’m not complaining about the price, because I think they’re well worth it! I’m just saying that I have a tendency towards being cheap. It’s a necessary survival skill when you went into the arts.) 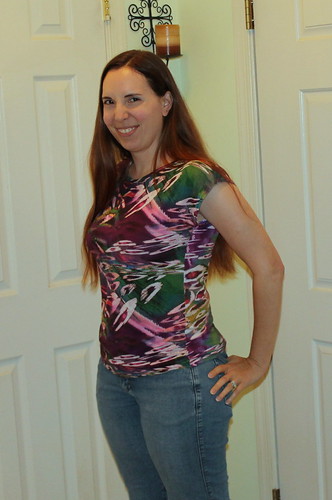 The top went together quite quickly and easily, since there were only two pieces and a neck binding. The only issue I had with it was that I didn’t read the directions before I started, so I didn’t realize that seam allowances weren’t included! So I just did as narrow a seam as my serger would allow, and then did a narrow hem on the sleeves and shirt bottom as well. It still fits, and actually is quite loose around my waist compared to, say, my Renfrew tops. You can’t see it so well in these pictures, since I had to resort to using indoor flash photography in order to get any pictures at all. But the busy print and the drapiness of the knit camouflages it pretty nicely, and keeps it from looking too baggy. Good thing, since it is still quite fitted at my hips. So mental note to self, a thicker knit with less drape probably wouldn’t work out so well for me.

Whenever I make this again, I think I’d add some length to the bottom, and especially the sleeves, to make them a little less cap once they’re hemmed. But overall, this was a great instant-gratification project!

I’m going to end this post with something I haven’t done in awhile, at least for my sewing–an in-progress shot. 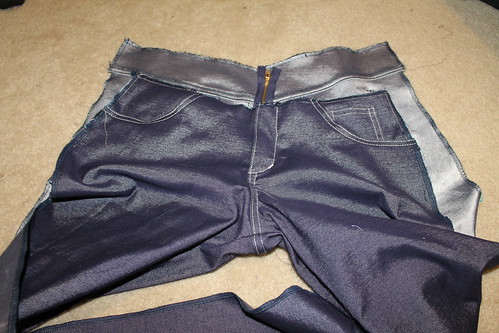 As I’ve mentioned before, I’m doing the jeans sew-along that Sew Busy Lizzie is hosting. And my progress has been a little slower than I would have liked– I didn’t get much in last week because I had my annual teaching-flute-at-middle-school-day-camp job, and on the night that I’d actually reserved to do some sewing, the power in the entire town went off for the whole evening and didn’t come back on until it was too late to start anything! I was home all day on Saturday, so I did make quite a bit of progress then–pretty much everything you see on the front, plus the inseam. But then the power went off again before I could do the topstitching there, so that’s where it’s stayed. I do have a little extra time off from my retail job this week, so I’m hoping I can finish this up rather quickly now that the hard part (the fly zipper, obviously) is over. At least the sewing part, since I realized I didn’t have enough silver rivets on hand and had to place an order.

This is the same denim that I used for my TARDIS skirt back in the fall, and would you believe I still have a yardish of this left? I’m running out of ideas for what to do with shiny metallic stretch denim!

3 thoughts on “a simple tee”