For all of the refashioning that I used to do, I really hadn’t done any in awhile. Over the last couple of years, I’ve been super-focused on stashbusting and making from scratch, so much so that I forgot how fun, and how instantly gratifying, transforming something that’s already around can be. It’s a whole different group of problems to solve, and a good challenge.

I have two refashions from May to show today. The first is one of my all-time favorite dresses, that sadly wasn’t zipping at the top anymore. 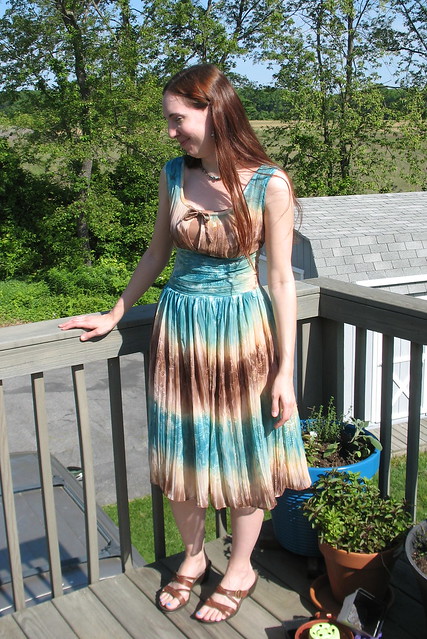 Remember my Titania dress? I was so proud of this one, since I basically designed it and hand/draped it myself. Though, to be honest, the top wasn’t holding up so well. Since I was more or less winging it, the insides weren’t finished so great, the fabric was starting to sag around that slit in the front, and gaps were starting to appear where the ends of the binding met around the sleeves. I still love the fabric, and that hand-pleated skirt would have been the hardest thing to let go of. So naturally, I chopped off the top and made this dress into a skirt.

Aside from one random Instagram, I didn’t take the time to do too many in-progress shots this time. So what I did was to pin a length of grosgrain ribbon to the midriff panel, leaving an extra-long tab at one end, stitch it, flip it, and use that to make a waistband. The extra-long tab was used to make an underlap, which has a couple of hooks and eyes and snaps and things sewn to it. Aside from that, the only thing I did was to shorten the zipper in the center back. 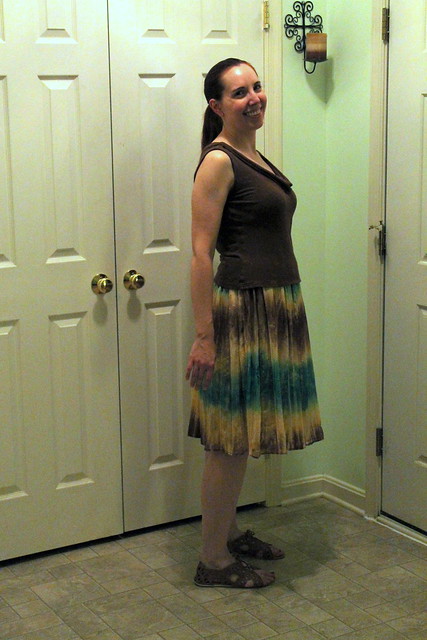 And here’s the result! It feels a little weird to me since I’m not used to skirts that hit at my natural waist. But with the fullness of the chiffon bit, this skirt makes me think of ballet. I feel like this will be a lot more versatile as a skirt than it was as a dress, since I can also dress it down depending on my top and footwear. So all in all, I feel like this was a success. 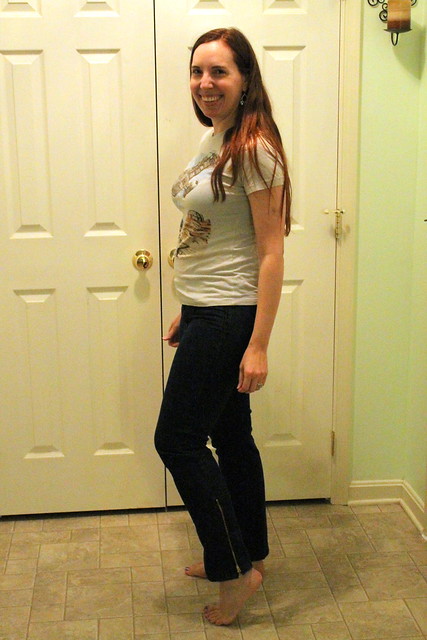 As for the second project, this one had a preview during Me-Made-May. I bought a few pairs of jeans at the thrift shop near the end of the winter, because I had a couple of pairs shrink or wear out completely (to the point where they had to be relegated to work jeans–yes, I have a separate set of jeans that I only wear to the garden center, because I don’t care if they get messed up by dirt or paint or whatever other random things I have to get into there–or just gotten rid of completely), and I knew I wouldn’t have time to make jeans anytime soon. Yay, spring. One of the pairs I bought fit me adequately well through the waist and hips, but they were just a little too short to look good with regular flat shoes. I don’t have a before picture, so just think flared jeans that were awkwardly hitting right around my ankle.

Here’s the after–I was intending to make it more of a skinny jeans silhouette, but discovered while I was working with it that the fabric would be much happier with a straight, slightly tapered cut. There wasn’t any stretch to the denim, so it made sense. All I did was take the side seams apart up to about the knee, pin them down the length of my leg (much to Doug’s amusement, since I was also wearing them inside out at the time), sew in the zippers, and re-stitch the hem. The zippers ended up being unnecessary in the end, since I can pull them on and off easily without unzipping them, but I like the detail that they add. I do still plan to make some more jeans, and am hoping to tackle some skinny jeans this month because I do need them before DragonCon. Because of reasons.

I do have to say that I was really surprised at how easily these jeans came apart! The nice thing for refashioning purposes was that each side of the outer leg seams was individually finished on the serger, so I didn’t have to unpick a bunch of serging. But if I unpicked it in the right place, the seams came apart quite quickly, and the hems pretty much entirely unraveled with the tug of a thread. I would have thought the quality would have been slightly better, given the Tommy Hilfiger label on them! 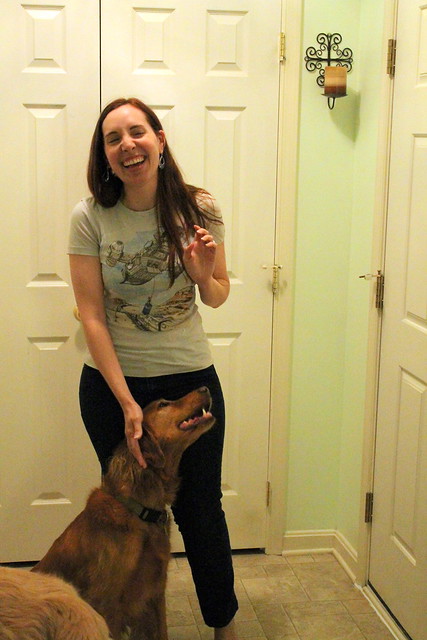 And, since it’s Friday, I’ll leave you with a silly outtake picture. Silly dog can’t resist an opportunity to photobomb me!

2 thoughts on “they’ve been chopped”