Trying to catch up a little here, and I figured it’s better to have phone photos than none at all, right?

Anyway, this month’s Stashbusting Sewalong theme is knits, and since I’ve been pretty short on sewing time lately, I thought it would be good to try and knock something out. I had a striped ivory knit tee on my capsule wardrobe list, and decided that it might be more useful as a layering piece rather than a more traditional tee. So here’s what I ended up with! 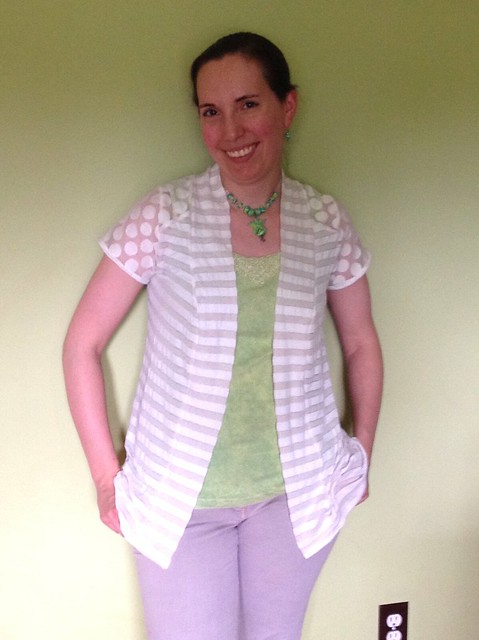 I still based this on the Plantain pattern, as originally planned, with a few modifications. I got the fabric from Kerilee in last year’s Sewing Surprises swap, and there wasn’t a whole lot of either piece. So I used Heather‘s yoke modification again, so I could work in the polka dot mesh and use that to stretch the stripes. (I’m print-mixing! It’s a start.) Short sleeves, obviously, which are bound at the edges with the striped fabric. 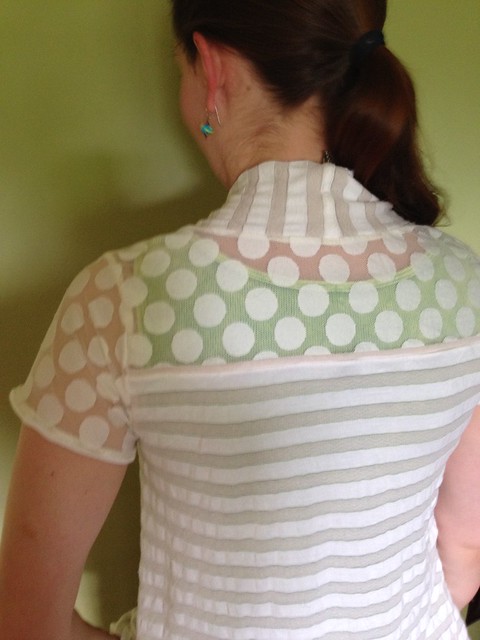 The polka dots look cooler from the back, obviously. I like that it lets some color from whatever tank top I’m wearing show through, and I think it will be a very versatile summer layer as a result. 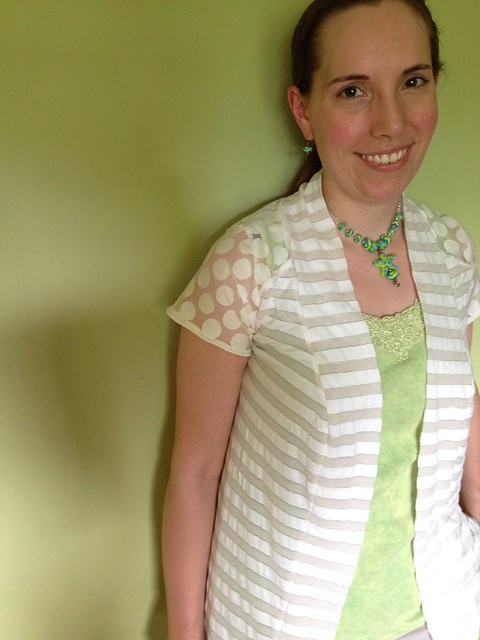 Ugggh, I look so tired in this picture! Anyway, the collar/front was sort of a happy accident. My pattern drafting skills aren’t the hottest, and when I was cutting this out, I had the presence of mind to slope the neckline downward to the center front, but I forgot about silly little things like adding seam allowances! So when I tried this on partway through, the front looked pretty wonky because it was so skinny. I had a fairly largeish, mostly rectangular scrap left. So I cut it in half lengthwise, seamed it in the middle, and basically made it a big wide binding strip. The inner edge is just a fold, so it looks pretty nice and clean. I’m actually really happy with the finished look of it, so one of these days, I might actually draft this as a pattern piece to use for a future pattern hack!

So now I just have one other fairly quick project and a refashion to post, and I’m all caught up. Unless I actually have time to sew something else. We shall see, since I haven’t been able to sew a single stitch this week.