I’m lumping these together again– partially because I had to really think about the resources, and partially because I was a little more focused on having a solid sewing day yesterday– my birthday gift to myself! 🙂 (It was yesterday, and yes, I got spoiled– I got lots of lovely messages on various social media from friends and family, two gift cards to Joann’s that should cover notions for my fabric stashbusting endeavors for awhile, a set of pretty interchangeable knitting needles, and Doug gave me an appointment for a massage at a local spa. My shoulders are almost always tense, probably mostly due to my choice of musical instrument, so I’m really looking forward to that!)

Since I don’t have any new tutorials or groundbreaking technique tips at the moment, I thought I’d share two resources I’ve found for places to get sewing supplies that you wouldn’t necessarily think of. I’m highly reliant on internet shopping for my crafty needs, so I’ve had to get creative sometimes!

#1: Dharma Trading Company. They’re probably most commonly known as a one-stop shop for all of your dye needs. So obviously, if you want to play with dyeing some fabric, this is a great place to get your colors! But they also have a really nice selection of natural fiber fabrics by the yard, including cotton, hemp blends, bamboo, and silk. Most of it is in a natural color, obviously, since it’s meant to be dyed. What I’ve most often bought from here is the silk, because the prices are really good compared to places like Fabric.com and Mood–all of my lining and underlining fabrics for my wedding dress were purchased from here, except the nude organza to underlay the lace on the sheer part of the bodice, and this is the first place I’d look to get silk organza for tailoring-type projects and interfacings.

#2: KnitPicks. Yes, the place I already linked to for those knitting needles. You might already know about this if you’re one of those sewcialists who also knits, but I was surprised to learn recently that they sell buttons! I shouldn’t be… I mean, cardigans. But I was recently looking for a larger quantity of buttons for my current project, Joann’s didn’t have enough of anything in stock, I did some poking around on Etsy, fell in love with a certain style of button that the seller only had one of, and then the Google rabbit hole led me to here. They’re not necessarily an inexpensive source, and the majority was a brand that’s pretty common at Joann’s, but it’s probably fairly comparable to paying full price at a fabric store. More importantly, I was able to get 16 buttons that matched. (I’m super-excited about the ones I found, but am going to wait for the finished project post to show those off.)

Day 4: Sewing Project Day
I’ll have to go with an in-progress post here. As you know from recent posts, my current project is the Sewaholic Robson Coat. I’m grateful to Tasia for coming up with such a cute jacket design, and to the Sewcialists for the #bluefebruary sewalong–even though it’s highly unlikely at this point that I’ll finish this one while it’s still February, given that it ends, um, tomorrow, it was great incentive to get this started at a time where I’m likely to be done by the time it actually gets to spring jacket weather! 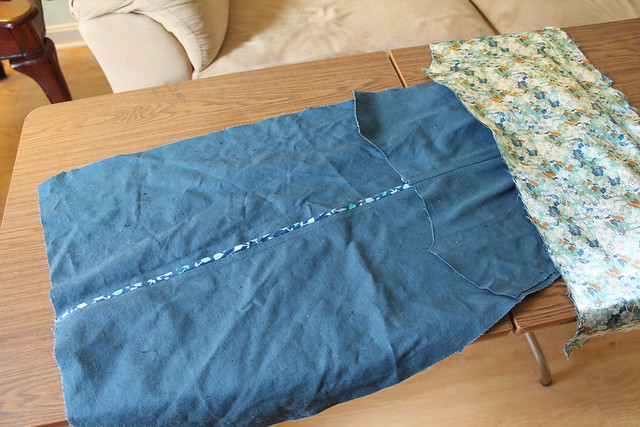 I did some very minor tweaks to my muslin that worked out really nicely, so I got the whole thing cut out on Tuesday and started sewing the real thing yesterday. I don’t have a lot to show for it yet, mostly because I’m trying to take my time and do a really nice job.So this picture pretty much encompasses what I did get done so far, aside from already needing to iron that sewn piece again! I underlined the sleeve pieces with a silky print from my stash, leftover from this jacket, basting it together by hand. I already had the strips cut and sewn together, but I had to buy a bias tape maker and it didn’t come in until Tuesday, so I had to press about 12 yards of bias tape. I also spent some time fiddling with the idea of a bound buttonhole, and I’m glad I tested this first, because I don’t think it will work for this particular project. (The buttons are on the small side, so I don’t have much room to maneuver.) So I really only have one seam and two pocket flaps done, and the inside pocket pieces basted onto the front pieces. 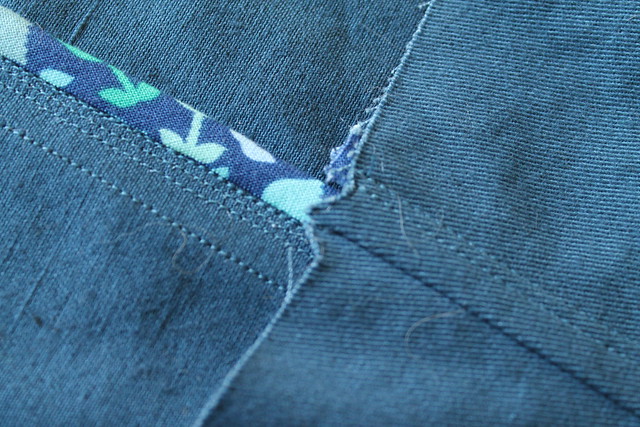 A closer-up view of that seam. I’m basically having to sew all of these seams five times– once for the actual seam, twice more to enclose the edges with that bias binding, and twice more for topstitching. I think the double topstitching will look really nice, though. The reason I’m doing the two rows close together like that is because I probably should have bought a wider bias tape maker, because I’m just barely getting the raw edge caught with the edgestitching, and the topstitching row further from the seam will help to further secure the binding.

If I can keep the topstitching this neat, and get the wrinkles pressed out a little better–I have a feeling my bottle of Best Press is going to be my best friend here–I think this will look really nice when it’s all together!