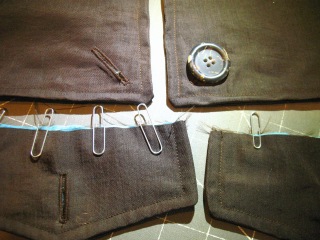 This was the first day I was able to work on the raincoat since the last post. Though I did get some knitting in, and one of those patterns traced out. (And I may have ordered a couple of patterns….Ahem.) So here’s what’s new:

I have buttonholes in the pocket flaps, and the yoke. (Decided to go diagonal on the yoke, just to mix it up. Also, I miss the automatic buttonhole sizing capability that my machine used to have before I broke the original foot….sigh.)

I did a lot of internal seam finishing, because look how much this stuff frays! So between that and not being able to actually use pins for fear of poking more holes into it, this is taking a rather long time. The other reason it took a little longer than I thought it would was because I was having a little trouble with one of the pockets….first time I made it inside out and the second time I sewed it in upside down! 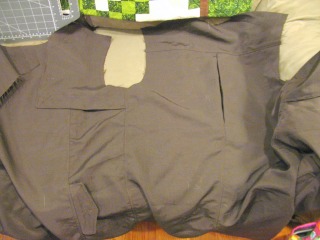 But this is what the outside looks like now (photo lightened quite a bit since it’s the only way to see the details.) The front pieces are sewed together, the pockets are in, and the fronts and back are now sewed together at the sides. The waterproofing is drying now, at least as far as I could get it on….I kind of ran out, and since I’d already used and frozen twice, the brush wasn’t working so well and I’m not sure the seams are sufficiently coated. So I ordered two more tubes tonight, to be on the safe side, and I’ll probably re-coat those once it’s in. In the meantime, I can at least sew one seam on each sleeve, and start working on the belt and loops and stuff. Maybe the lining, if I can figure out the best way to sew that together and still get it in the jacket well…. I’m still not sure if I should leave a gap in the back, or just do the hems by hand or what.

One thought on “A little progress, at least…”