First off, just wanted to thank Helen, Kristin and Ginger for the suggestion of crocheting around the neckline of the sweater. I got the same suggestion from my mom, and since my best friend is a crocheter, I got her to do that for me over the weekend. (Figured it would be better from someone who knew what she was doing!) It definitely feels more stable now–I just need to weave the new yarn ends in and then test it out. Hopefully that will do the trick!

With January already a third over, I’m starting to get kind of antsy to actually make some sewing progress! Especially since I made the mistake of pondering my mental list of the next several projects I’d like to do there while I was driving around today, and they’re all pretty much things that involve a lot of tailoring and fitting and whatnot. (I’m definitely going to have to throw in a random knit shirt or something, just to give me something relatively simple.) So, in hopes that I can actually do some sewing tomorrow, I spent pretty much the entire evening after work trying to get as much of the raincoat cut out as possible. 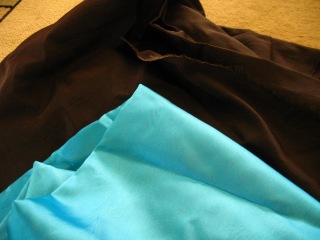 I’ve been kind of dreading this task…cutting out is pretty much my least favorite part of sewing anyway, and I don’t currently have access to the table I usually cut stuff out on due to remodeling. So I’m having to awkwardly lay fabric out on the living room floor in a narrow space and hope that the family dog doesn’t walk on it! Plus there’s a lot of pieces, and two pieces of fabric. (You know me, gotta have the bright lining to offset the dark exterior….)

The good news: I’m pretty sure I got all of the outer pieces cut out, including all of the fiddly little rectangular bits that the magazine didn’t give me pieces to trace. And I have large enough pieces left of the outer fabric that I can probably recut any of those that I messed up on, with the exception of the belt, which was rather difficult to cut a rectangle of that length on the very, very confined space allowed by my tiny little cutting board on the living room floor and caused me to unnecessarily waste a bunch of fabric that I wouldn’t have otherwise because I had to attempt it 4 times. (And the end still went crooked that last time. Oh well. At least it wasn’t in two pieces like the previous two attempts.)

The bad news: I’m not entirely done cutting out the lining yet. Mostly because the fabric got horribly wrinkled and I had to iron it, but also since I’m using the flannel pieces I tested it with to back it for warmth, and am cutting the lining out single-layer and pinned onto those so I can match them up better. I finally gave up for the night just before I started writing this. Three hours was enough cutting for one day! 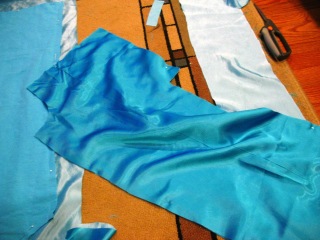 I think this is going to be fun inside the jacket, though. Don’t you?

The back is going to prove a little tricky due to the pleat, I think I’m trying to figure out how to make that work with a lining, since the pattern calls for a lining that basically stops right above that–it only lines the sleeves and the upper back. Since I’m fully lining it, I’ll have to rethink that. I was thinking about just sewing the lining and back pieces together in such a way that all of the bulk is in that one seam that attaches the yoke, but then that will most certainly throw things off at the side seams. At the same time, I don’t think I want to eliminate the pleat in the lining entirely, because that kind of defeats the whole purpose of having a pleat for ease of movement! I’ll have to think about it, I guess…any suggestions?

2 thoughts on “Starting the raincoat!”