…that empire-waisted stuff is not the easiest thing to fit on me, and therefore should be approached with far more caution? I won’t say I shouldn’t make them, period. Because style-wise, I like it. But realistically, I often run into the problem of having to do something to the waist to avoid a maternity look, or the following story:

I had a couple of hours to kill on Friday between work and a going-away party I was attending, so I figured that I’d go for what I thought would be a quickie refashion while I had the right color of thread in the serger. So I took this dress (the one on the left: 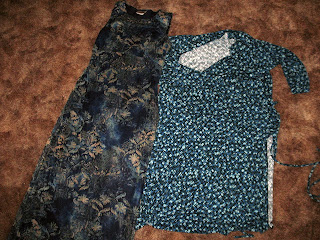 Sorry, it’s been so long since I got this, and it was already partially deconstructed, so I couldn’t take another “before” shot. Basically, it was this 2-layer empire-waisted maxi-dress– a polyester knit inner layer, and then this cool mesh print outer. 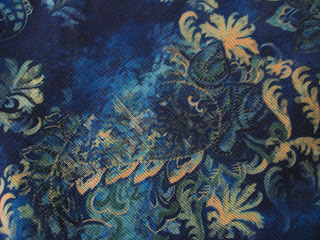 The dress was uncomfortably small for me up at the top, but I figured there was enough fabric there that I could get something fun out of it.

Fast-forward about 2 years, when I dug it out of the bin of clothes I have to refashion. (Well, 2 bins. I’m trying to get that down to a more manageable level too.) I had in mind to make it into an empire-waisted top, thinking I wouldn’t have enough of the skirt to do a longer bodice. 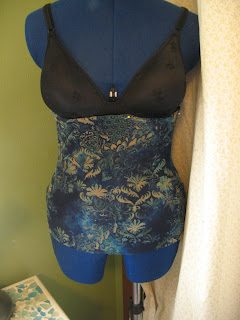 So I chopped off the top of the skirt and stuck it in place on Donna…. 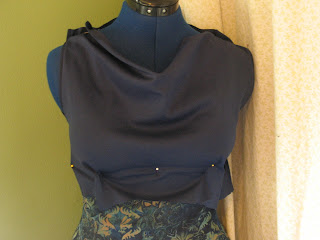 …began to drape out a top piece with the lining….

…and, using that as a pattern, cut out and sewed a good chunk of the bodice together with the mesh layer. Unfortunately, it seems I forgot to factor in that I actually have curves, and that doesn’t always translate well to draping on my dummy. 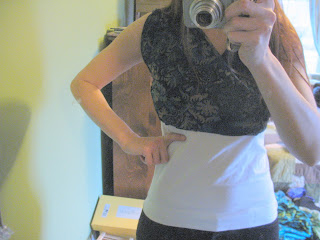 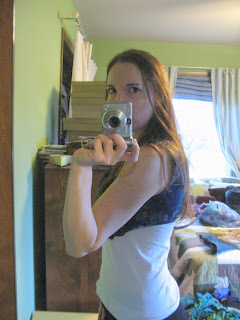 And tugging it down to sit at approximately a decent place (which still might result in the seam ending up in annoying places) makes the back go at this horrible angle. To quote that Despicable Me commercial that I keep hearing every time I watch anything through On Demand these days, “Not cool.”

Honestly, I’m not sure if that’s fixable, because I certainly don’t have enough of the fabric left to make another bodice that would actually be long enough. So I’m officially declaring this one a craft fail. I still like the print, so I’m keeping the large pieces of mesh that I still have and sticking those in the scrap bin for now– maybe I can use those to embellish something. So it’s a shame, because I still like the concept of what I was doing (had these great pleated shoulder seams and all) but I guess all of my experiments can’t work out. Although, to be honest, this one might not be a huge loss, because that polyester lining probably would have made it feel rather uncomfortable to wear around here when it’s actually warm enough for me to wear sleeveless.

Hopefully I can dig into the bin and find something else to play with soon. But for now, it’s back to work. The good news is, the dress is done except for pressing the hem, and I’ll have finished pictures of that for later. The not so good news is, even though I’m back to work, it seems my hours are still quite cut back from what they used to be, and so I’m only doing 10 hours this week. My silver lining is that it means I have several hours between when I just wrapped up my flute practicing, and when I actually start teaching this afternoon. So I have one more sewing project to knock out for my cousin’s upcoming wedding. If all goes well, I’ll have another finished project, and possibly even a tutorial, to share later!

One thought on “When will I learn…”